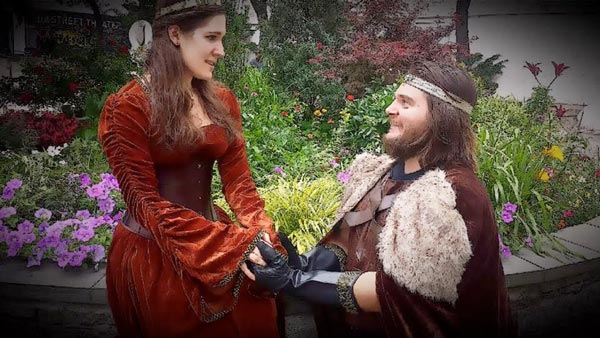 Hudson Shakespeare Company returns with the second installment of its 25th annual Shakespeare in the Parks tour with the lost history and romance play “Edward III” written by William Shakespeare and Thomas Kyd coming to parks, libraries in North Jersey and Stratford, Connecticut and the Rhino Theater in Pompton Lakes, NJ from July 12-30.

Hudson Shakespeare Company continues the saga of the Plantaganet family which began with last month’s “Richard II” and concluding with “Henry IV, Parts 1 and 2 in August, which follows the of downfall of Richard II and the rise of his cousin Henry Bolingbroke and the coming of age of his son Prince Hal. This month the company takes a different twist on the history format and instead flashes back to the story Richard and Henry’s grandfather, the man who started the Plantaganet dynasty Edward III and his son Ned, the Black Prince.

“In typical Shakespeare history play fashion England and France are on the warpath once again but this time we have an intriguing and unexpected love story that thrown into the mix with the swordplay and pageantry and quite a bit of comedy”, said Jon Ciccarelli, the play’s director.

Edward III (Ben Forer) is a career warrior king who is interested in pressing his claim to the French throne but also getting even with the snarky and condescending King John of France (Keith Hale) and his equally over the top son Charles (Issac Andrew) for embarrassing him in his own court. As Edward readies his forces along with his wet behind the ears son, Prince Ned (Rhiannon Lattimer), for the invasion of France, a border skirmish diverts the army to protect a strategic castle. What starts out as a minor diversion for King Edward becomes an expected romantic encounter when he meets the bewitching and fiery Countess Catherine of Salisbury (Rachel Matusewicz). The Countess has been holding out against the invading Scottish king but is relieved when the English army comes to her rescue and is equally taken with the dashing king. The mutually attracted pair celebrates the saving of the castle at a rowdy party there’s only one hitch in this promising relationship - both Edward and the Countess are married to other people.

“Love and relationships are hard enough in Shakespeare but it adds an extra wrinkle when you and the person you are attracted to are already married,” jokes Ciccarelli. “Neither Edward or the Countess are bad people but war can place you in strange circumstances and make you explore possibilities that you may not normally entertain and that’s where our star-crossed pair find themselves. Edward and the Countess find a release in each others’ company and their respective spouses are never far from their minds,” Ciccarelli said.

The war eventually calls and Edward heads to France and the attention shifts to the coming of age story of the spunky Black Prince, called so because of his penchant to wear black armor. Much of the play's humor comes from the mustache twirling counterparts in the French King (Keith Hale) and prince (Issac Andrew).

Being that this is set a couple of generations earlier than their recent ”Richard II” production which was very colorful and had a very traditional medieval look, the company decided to give the show a more Viking and early medieval feel. “Audiences that joined us for Richard II, will see a completely different look with our Viking ‘Edward III’ but also there are subtle callbacks to that production and our upcoming Henry IV. Each show has its own look but the sharp eyed audience member will be able to pick out the connective tissue,” said Ciccarelli.

“Edward III” follows the Hudson Shakespeare’s long tradition of featuring lesser done Shakespeare plays and even those that may or not be by the Bard. “Edward III” was not included as part of Shakespeare’s First Folio when it was first published in 1623 and was an anonymous and mostly forgotten play for nearly 200 years. In the mid 1700s it was revisited and the scenes with Countess of Salisbury caught scholars’ attention. Stylistic similarities had caused many to attribute at least these sections and sometimes the entire play to Shakespeare but it wasn’t until the 2000s that play won general acceptance into the Complete works. Today “Edward III” is regularly printed in standard collections such as the Arden and Riverside as a collaboration between Shakespeare and Thomas Kyd.

All park and library shows are free, with the public is encouraged to bring lawn chairs or blankets to the outdoor shows and register for the library showings as seating is limited. The one day showing at the Rhino Theater on July 15 http://smilingrhinotheatre.com/home... tickets are $23 in their new Studio 237 Theater.


Again all shows are free to the public, except for the Rhino Theater production. Audience members are encouraged to bring lawn chairs for the park showings and register for library showings. For more information call 973-449-7443 or visit www.hudsonshakespeare.com.

PHOTO:  The unexpected lovers of Edward III (Ben Forer) and the Countess of Salisbury (Rachel Matusewicz)