(JERSEY CITY, NJ) -- On Monday March 8th, Shakespeare@ Home will present Episode Three of the ALL FREE radio play adaptation of Julius Caesar, starring Patrick Page in the title role. Episodes One and Two are available and can be listened to and downloaded indefinitely at NO COST.  They are approximately 30-40 minutes long. The distinguished cast features acclaimed talent from Broadway, London’s West End and the New York stage.

To listen to Julius Caesar online, click here. The production will also be available on Spotify, Apple Podcasts, Soundcloud, and Stitcher. As each episode launches, it will available to listeners on all platforms at no cost.  Previous all free productions of the season (Richard II and The Tempest) are also available indefinitely. 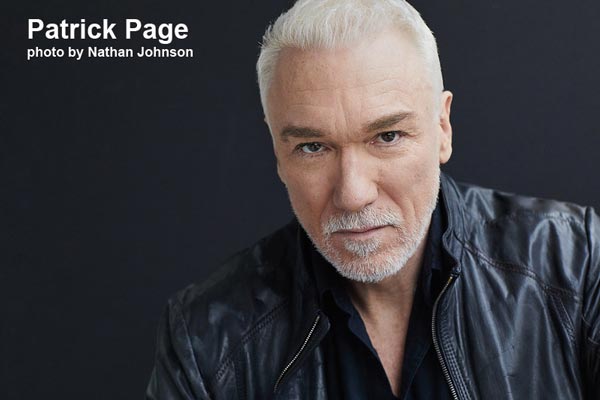 Produced by Jersey City's Shakespeare@, Julius Caesar is the third radio play of the season, produced and adapted by Artistic Director Sean Hagerty.  The play features original music and sound design. Hagerty crafted the production into four weekly episodes and partnered with the Emmy-winning team at Sonic Designs to capture the lost art and thrill of radio drama all without leaving the confines of quarantine. The company released their first two ‘radio’ plays of the season Richard II and The Tempest for their newly created Shakespeare@ Home audio series in 2020.

The final episode  of Julius Caesar will debut  Monday, March 15th at 7:00pm EST, ”The “Ides of March” (the day Caesar was assassinated). All episodes of Julius Caesar can be listened to indefinitely.

Julius Caesar is one of Shakespeare’s best known and most often quoted plays, chronicling the political and moral crisis of Brutus and his fellow conspirators as they plot to murder Caesar to prevent a dictatorship. First performed in 1599, this timeless play examines the razor-thin line between power and corruption, duty and ambition, and the perils of a state divided.

Shakespeare@ was founded to deliver accessible interpretations of classic works with a focus on international and cross-cultural exchange.  Its live performance debut, a lush 2019 production of Hamlet starring Jonathan Forbes, garnered rave reviews and was hailed as “theatrical perfection," selling out its run at Grace Church Van Vorst in Jersey City.  Hagerty says, “After our 2020 season was lost, we re-structured our format to continue productions, employ artists, and serve our mission." He conceived the all-sonic performance project, Shakespeare@ Home, to recapture the great heyday of serialized radio drama of the 1930’s and 40’s. The first two productions, Richard II and The Tempest received accolades from critics and audiences alike.

Artistic Director Sean Hagerty views the play as incredibly timely, explaining “In our current fractured, hostile, and divided discourse, I have always felt the play particularly resonant. But in the past few months alone, as we have watched our nation slip perilously close to the cliff-edge of democracy, I can think of few better plays that cry out to be heard.”

In addition to launching their third no cost all-audio drama, Shakespeare@ has partnered with Robert Young, the former Director of Education at the world-renowned Folger Shakespeare Library and a team of educators, to launch their Education Initiative with dynamic, multi-media study guides to accompany each of their radio plays. Featuring activities and lesson plans designed to be used in a classroom or virtual setting, the guides feature cast and crew interviews, with in-depth audio and video tracks highlighting different aspects of the play, the artistic choices, and history. These study guides are free to schools and qualifying educational institutions. For more information visit the website or email education@shakespeare-at.org.

Julius Caesar features original music composed by Joan Melton with sound design by the Emmy-winning team of Dan Gerhard and Ellen Fitton of Sonic Designs. Justin Goldner is the music producer and supervisor, and casting is by Robin Carus. Sydney Steele serves as the Associate Producer.

Shakespeare@, Jersey City's premier classical theatre, tells epic stories in intimate and unique spaces, with a mission to revitalize the performance, education and audience for Shakespeare and classic drama. Shakespeare@ is committed to international and cross-cultural exchange in its productions, reflecting the diversity and roots of the community they serve. In response to the pandemic, the company formed Shakespeare@ Home, the all free sonic performance project to recapture the days of serialized radio.  Since the “@” in the company’s name refers to the various locations utilized in each production, this recorded series is titled Shakespeare@ Home as home computers serve as venues for both artists and audiences.

Sean Hagerty (Artistic Director) trained under Sanford Meisner and studied classical theatre at the renowned Bristol Old Vic Theatre School. He holds a Masters Degree in Shakespeare and Theatre from the Shakespeare Institute in Stratford-upon-Avon, where he graduated with Distinction. Sean has worked as an actor, teacher, director and producer regionally and internationally for many years. Credits include: New York Classical Theatre, The Lord Chamberlain's Men, The Group Theatre, Ensemble Studio Theatre, The Shakespeare Theatre of New Jersey, Cincinnati Shakespeare Company, The Bath Shakespeare Festival, The New Vic, Theatre Royal Bristol, and BBC Radio, among others. Previously, Sean was the resident Shakespeare and Style teacher at The Neighborhood Playhouse School of the Theatre for over 14 years and was the Associate Artistic Director for New York Classical Theatre. He has served as the chair of Education & Training for the international Shakespeare Theatre Association and as a panelist for the National Endowment for the Arts.