REVIEW: Vanya and Sonia and Masha and Spike

originally published: 02/03/2015
(MILLBURN, NJ) — Paper Mill Playhouse presents Vanya and Sonia and Masha and Spike by New Jersey native Christopher Durang now through February 15. The play, which was originally commissioned and produced by McCarter Theatre in Princeton, went on to become a hit on Broadway, picking up the 2013 Tony Award for Best Play and the Drama Desk Award for Outstanding Play.

Set in Bucks County, PA, the play revolves around the lives of three siblings. Vanya and Sonia (who never forgets that she was adopted) and their sister Masha, a famous actress. Vanya and Sonia stayed at the house to take care of their parents in their final years. Neither of the two have jobs; the bills are all paid for by Masha who has recently been advised that she should sell the home.

"Did you dream in the documentary form?" her brother Vanya replied. "You are 52 and you're not married."

Neither of the two have many prospects in their love life, mainly due to rarely leaving the house. Their main form of contact with the outside world comes via the cleaning woman, Cassandra who has a habit of seeing the future. Cassandra warns them to "beware of Hootie Pie" — a cryptic message that soon comes true as do most of her predictions. Not long after, their sister Masha returns home with her latest young lover, an actor named Spike.

Seeing this play at Paper Mill offers a rather unique perspective due to its immense staging. Instead of simply seeing a portion of the house as part of the set, they have built an entire home. Its size serves as a constant reminder of the home for Vanya and Sonia, the past for all three when they were a family, and almost as the lead character itself. It also offers the feeling that they are all small in size compared to the house as though their ancestral home is something worth saving. 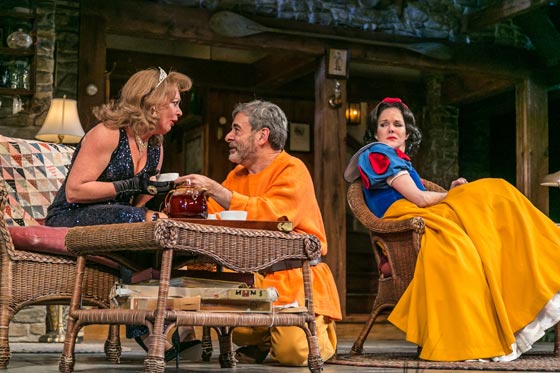 Masha has returned to attend a costume party at Dorothy Parker's former house. She's going as Snow White and wants everyone else to go as characters alongside her — Vanya as Grouchy and Sonia as Dopey. Unfortunately, her plan doesn't quite work out. Spike meets a young woman named Nina at the lake and brings her to meet Masha. Sonia decides she doesn't want to be a dwarf and creates a stunning look as the Evil Queen as portrayed by Maggie Smith on her way to the Oscars. And Nina tags along as Dopey.

The possibility of meeting someone at the party excites Sonia, but her brother doubts she will have any luck.

"Our lives are over, aren't they," asks Sonia.

Durang's comedic writing is in fine form throughout and he offers each character their own scene to shine in. Highlights include Gina Daniels' Cassandra stealing scene after scene as a voodoo practicing cleaning woman who sees the future; Phillip Bowgen's Spike recounting his audition for Entourage 2 — his lousy acting during the scene is hilarious; and Mark Nelson's Vanya giving the best "Get off my lawn" speech of all-time as he recoils over how the world has changed since he was young. 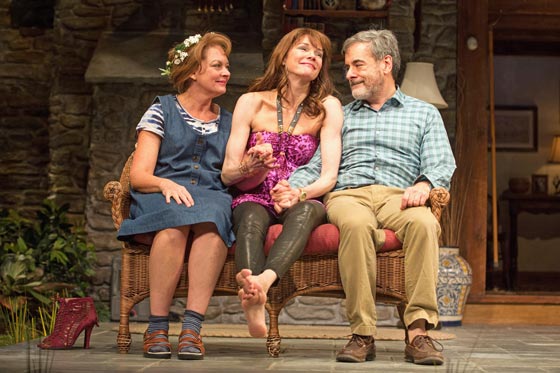 The cast includes Carolyn McCormick as Masha, Michele Pawk as Sonia, and Jamie Ann Romero as Nina. Directed by Don Stephenson, Vanya and Sonia and Masha and Spike is a laugh out loud comedy that offers an interesting look at the family dynamic between siblings. There's jealousy, envy, and lots of love between the trio. Paper Mill's cast is excellent and Mark Nelson is simply terrific. He seems so comfortable in this character you forget he's on stage.

Highly enjoyable, if you like Durang's writing see what it's like on a truly big stage. It will offer you a new perspective on his work.