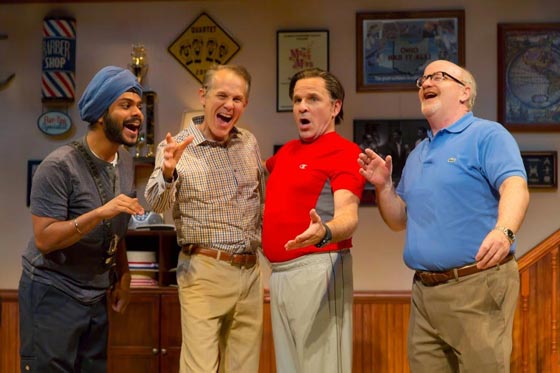 You don’t have to be a fan of barbershop quartets to enjoy The Fabulous Lipitones, but ideally you come for the music and leave with the message.

Playwrights John Markus and Mark St. Germain (who met while writing together for The Cosby Show) present a very serious topic (racism) in a light-hearted comedy that is actually quite touching in unexpected ways. According to an interview with John Markus in the program, the method of message delivery was inspired by advice from Bill Cosby.

“If a story evokes consistent laughter and genuine enthusiasm from an audience, it can coax people into any journey,” said Markus. “For six years, Bill Cosby always coached me on how to deliver our show’s message by ‘sneaking in through the backdoor, and not spoon feeding the people.’ He talked about how laughter would be the audience’s reward for taking that journey with you.”

The journey in this case is one involving a barbershop quartet in London, Ohio that is composed of lifelong friends in their fifties. The group finds itself short one member when their tenor dies during competition while singing the high B flat. We learn this from the opening moments, which take place at the singer’s funeral (the second straight play of George Street’s season to begin with a funeral). Disregarding the wife’s plea that no barbershop music be sung during the funeral, Wally (played by Wally Dunn) couldn’t contain himself. The others (Phil Rizzardi played by Donald Corren and Howard Dunphy played by Jim Walton) soon join him. Their impromptu performance does not go over well.

“I have to say that was the first time I was ever asked to leave a funeral,” said Rizzardi.

“Yeah, but did you hear that applause for our number?” asked Dunn.

“That was for Georgina for kicking us out!” replied Rizzardi who believes it is time for them to give up on barbershop. He tells Wally to find a new hobby and move out of his mother’s house to which Wally replies, “My mother is our biggest fan.”

Shortly thereafter, the garage calls Wally to let him know the status of his car. Wally has a habit of not knowing how to turn off his speaker phone allowing the others to hear a beautiful voice in the background singing “Danny Boy”. They ask who is singing and are told it’s just Bob, he works there. When they ask him to have Bob come by to audition for the group, they are warned, “Trust me, you don’t want this guy. He’s not one of you.”

When Bob arrives the next day, they see why. Played by Rohan Kymal, Baba Mati Das or Bob as he’s known, is an immigrant from India. Rohan steals the show as the fish out of water with a beautiful voice. From the get go, Phil believes he is a terrorist, Howard is non-committal, and Wally can’t bear to imagine life without barbershop — so much so that he purchases memberships at Phil’s gym for him and his mother (along with private lessons) in order to convince Phil to remain in the group so they can compete in the finals.

The barbershop songs are a mix of classic numbers and originals written just for the play. The actors sound fantastic together and the songs provide nice interludes throughout the production. It’s not a pure musical, but has enough music to please fans of the genre. Mostly, it is a very funny play that does a wonderful job of dealing with an important subject. As seen here, nobody really believes they are racist until placed in a situation in which their racist views are challenged. Do the guys change in the end? Do they evolve? You’ll have to see the play to find out…

The Fabulous Lipitones is playing at George Street Playhouse in New Brunswick until December 14. For more information visit www.GeorgeStPlayhouse.org