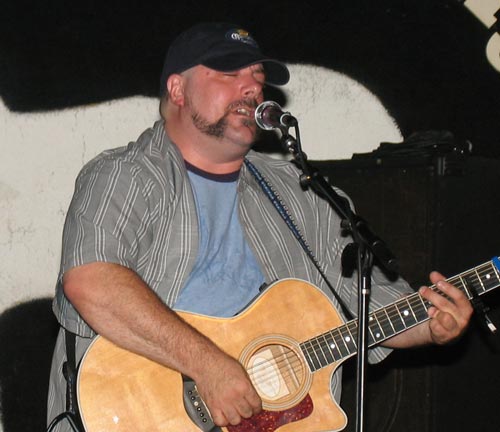 (ASBURY PARK, NJ) December 13, 2005 -- It was the annual Christmas poetry and music show hosted by Kris Oehme at the Saint, but it was far from jolly. The host was dressed up in a very interested Santa Klaus suit and handed out candy - perhaps as a reminder not to take candy from strangers. After all, the words spoken last night in the various songs and poems gave the impression that it will be one dark, dark Christmas season.

An assortment of local, solo musicians and poets filled the show billed as Friends of Muther Poetry & Acoustic Music Show. I loved the songs and most of the poems, but the show definitely seemed darker than in previous years. Maybe it was the lack of an Xmas film this year or because the weather is so friggin' cold; maybe it's because people are struggling to have money to buy gifts or because the country is still fighting a war we neither understand nor believe in. Whatever the reason, everything seemed darker.

Janey Todd opened the night with a great set and once again provided a wonderful buffet of food (book her all of the time!). She will be releasing a record with Indigo Planet Records sometime in 2006 and I'd guess some of her songs performed last night will be on the record.

Rick Barry abandoned the songs off his recent album for some material he wrote on his recent trip to California. He's definitely in quite a groove right now. It's always exciting to see a songwriter when they get in a stretch like Rick is in - each song sounds better than the last one written. I think the only song he did last night that he's performed regularly before was "A Stupid American Song" and you should have seen people shake their head in amazement when he uttered the "my cock is my weapon in the battle for your cunt" line. A few people at the bar quickly asked each other if they had really heard what they thought they heard. Meanwhile, I think the words may have escaped Scott Stamper as Rick seemed to rush them out a bit...

Tony Tedesco was the next musician on stage and prefaced his set by stating that the songs would be very dark. It's kind of ironic (and shows you how dark the night was) when one of the peppiest songs dealt with someone's hands shaking with a razor blade inside it. This was truly a suicidal kind of Christmas night. I told Kriz Oehme that he should get Stolinacha or Absolut to sponsor the show next year. It definitely makes you want to drink. But I loved Tony's set. Like Rick Barry, Tony concentrated on new material - stuff he said was written in the past week or so.

Amsterdam followed a bit later with a solo acoustic set. Several people in the audience hadn't seen Brian Amsterdam in many years and talked about how young he was when he used to play at the Stone Pony. His set also featured new music including some songs that Brian was still working on. Interesting stuff... Very alternative, but not as techno as his record. That might be from playing solo, but I think he's going after a lot of different sounds.

In between the music was lots of poets from Greg Schwartz, Mark Rasmussen, Jon Davies, Jessie Smith and more. There was everything from poems dealing with current politics to not getting laid for Christmas. All in all, it was kind of like watching "It's A Wonderful Life" backwards - things just seemed to keep getting worse. Or not really worse, just darker.

So, if you were one of the depressed this holiday season it was probably a great fit. If not, you probably wound up doing a lot of shots and having second thoughts as to how great the holidays really are. In a world where all the networks show are happy go-lucky Christmas specials, maybe we need more reality-based nights like this one. Then you really get to know what you're thankful ful at this time of year.