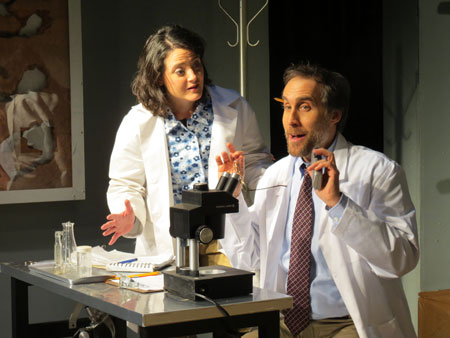 (LONG BRANCH, NJ) -- As a guy married to someone in academia, I never imagined the concept of a college professor sleeping with a student very funny; yet, there I was last Saturday night laughing -- quite often -- during the world premiere of "Ants" by Saviana Stanescu at New Jersey Repertory Theatre. This quirky comedy takes a look inside the world of ants, offspring, and how our two species are more alike than you'd think.

The play revolves around Kara and Mia, two sisters who have emigrated from Eastern Europe to a college town in America. Mia is a doctoral student currently working on earning her PhD in biochemistry. As the play opens, we see her practicing the speech she hopes to give someday when she wins the Nobel Prize for her work with ants. Shortly thereafter, Kara returns home. She tells her sister that she's just been fired from her job at the factory -- a place where she toiled for years, struggling to make payments on everything from the mortgage to her sister's education. As the two are knee deep in bills, Kara tells Mia it's her turn to be the breadwinner. Adding to the equation is the news that Kara is pregnant.

"I'm so tired of pushing toward the American Dream, I'd rather have my own little nightmare," says Kara.

As much as Mia loves ants, her sister despises them. She isn't even sure if she wants to keep the baby, but Mia does. She constantly draws parallels between the ant world and humans, and drives Kara nuts with her talk -- much of which does sink in. Mia says Kara is a "queen" now and promises to find a way to earn money. While doing so, she comes up with a hilarious outreach program to prevent Kara from getting an abortion. Meanwhile, Kara spends most of her time being sick or reading her fortune from tarot cards.

The pregnancy lights a fire under Mia to earn the fellowship she's been after, which would solve their economic dilemma. Meanwhile her advisor/professor teeters on sexual harassment charges with playful slaps of her butt and sexual innuendo remarks. Mia devises a plan to utilize these advances to blackmail her advisor while simultaneously changing the project she's working on with her instructor to the one she really wants -- radically altering nature by converting worker ants into queens -- a project she believes will ultimately lead to the Nobel Prize for her.

I'm someone that wouldn't normally find the subject of ants very interesting, but I was captivated by the project and the larger issue of nature versus nurture. Are the lives of ants really pre-determined based on their social class? Are the lives of humans? To really understand the implications of her project, Mia decides she must learn more about mating itself. With flyers around campus, she offers herself up to anyone who wishes to take part. One person responds, and the night changes Mia's life in more ways than one.

Throughout the play, Mia lives her life as one would imagine a scientist to. She feels she can control her environment and change real-life situations as easy as she does in the lab. While nice in practice, she soon learns that life doesn't work that way.