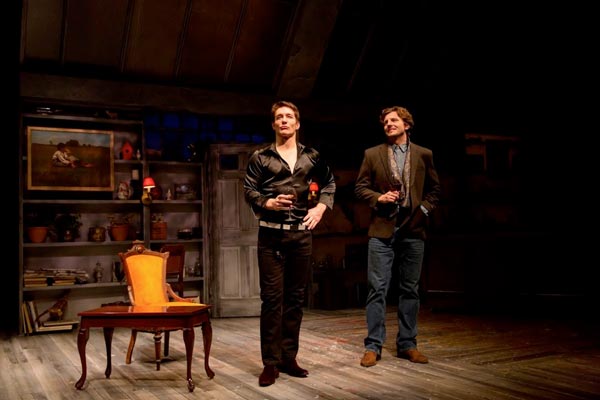 (NEW BRUNSWICK, NJ) — George Street Playhouse opened a wonderful production of  Nureyev’s Eyes by David Rush last week. It is a fascinating fictional account of the relationship between the painter Jamie Wyeth and the Russian ballet dancer Rudolf Nureyev.  The play stars William Connell (Wyeth) and Bill Dawes (Nureyev).  From the moment they hit the stage, the world becomes one of two tortured artists.  One who seeks to rise to the standards set by his family of famous artists; the other who fights comparisons to his lover for the title best dancer in the world.

“My name is Jamie Wyeth, I’m a painter.  I want to do your portrait and I wasn’t sure until just now,” says Wyeth upon meeting Nureyev.

Nureyev is reluctant at first, telling him that “you can’t paint dancer… ballet is dancer moving.” But Wyeth persists, even setting up a meeting under false pretenses.  Eventually, they come to an agreement - mainly because they both have specific goals that the other can help with.  Nureyev wants Wyeth’s connection to Lincoln Kirstein, the co-founder of the New York City Ballet, and Wyeth wants Nureyev to be the subject that will elevate his career.

Directed by Michael Mastro, George Street Playhouse’s Resident Artistic Director, the play moves at a swift pace.  It runs 90 minutes without an intermission and Mastro keeps the action at a very high and sometimes frenetic pace.  Both actors are exceptional, revealing both the confidence of their character as well as their fears.

One of the best scenes in the play is the negotiation between the two regarding the painting.  Nureyev spouts out a laundry list of demands, yet Wyeth goes toe to toe with him.  After hearing his list, Wyeth confidently shoots down each demand, ultimately saying, “I don’t tell you how to dance, don’t tell me how to paint!”

In real life, Wyeth is known to have sketched hundreds of drawings of Nureyev over the course of several years.  In an interview with the New York Times in 2002, he described Nureyev as “one of the most demanding and fascinating assignments he had ever taken.  He wanted to capture ‘this phantom figure,’ he said, a goal that was complicated by Nureyev's obsessiveness about his art and himself.” 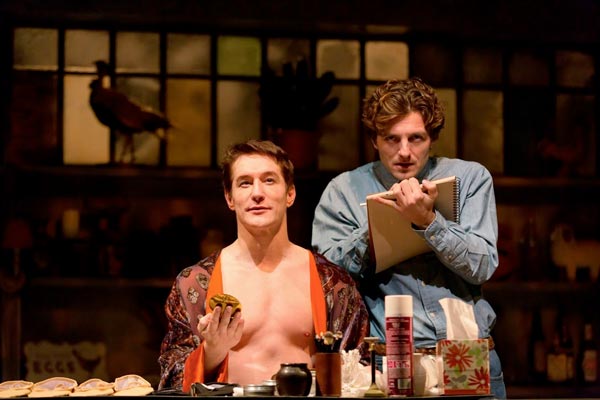 A funny thing happens along the way; as Nureyev sits for Wyeth time after time and months pass, the two become friends.  Both sense the greatness within each other and recognize the potential that could come from the painting; Wyeth knows he can finally be seen as a true member of his family’s artistic legacy and Nureyev can gain the immortality he has long sought.

Wyeth probes Nureyev along the way, determined to learn his secrets and discover what drives his passion.  His answers are like riddles into his soul.  When asked what is your happiest day he responds, “tomorrow, always tomorrow.”  Nureyev, who defected to the United States, also reveals his greatest fear — the KGB hunting him down.  “The only place I’m free is on stage,” he says. 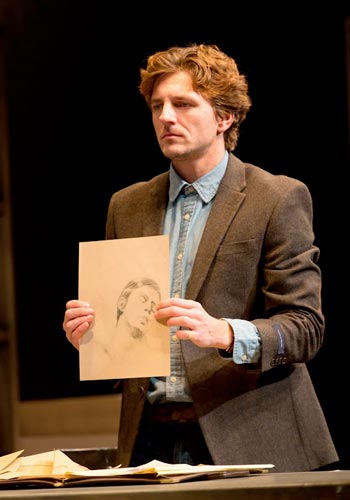 Nureyev’s secret is in his eyes, Wyeth believes.  His questions are always given with the hope of capturing the truth hidden inside.  Part of his obsessiveness with the sketches is a quest for an image that will accurately portray Nureyev’s eyes and lead to his masterpiece.

Their friendship is partially built by the personal demons they both share.  Wyeth constantly hears a voice that tells him that he cannot paint, he doesn’t match up to his family’s name and never will.  Nureyev’s voice goes even farther, telling him that he will fall and he will drop his partner.

“Your voice is a lot more aggressive than mine,” said Wyeth.  “He’s Russian,” is the response.

It's not important to know much about ballet or art to enjoy this play.  There are a few mentions of specific dancers and paintings, but the story is truly about these two characters. Whether or not you know Wyeth's family story or the dancers that Nureyev compares himself to will not take away from the plot.

The play is a perfect blend of drama and comedy. Beautiful lighting changes lure us into the minds and moods of these artists, showcasing everything from their joy to madness.  The lighting is such an integral part of the production it is practically a character of its own.  Through the ups and downs of an often intense relationship, the play ultimately begs the questions: how much does an artist need to know about his subject in order to capture them on a canvas? An how much do they need to know about themselves?