REVIEW: Godspell at The Eagle Theatre 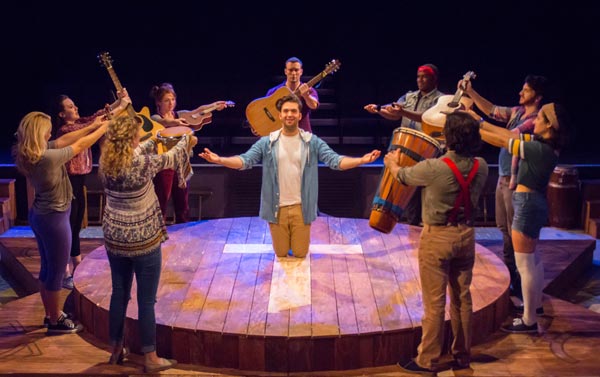 Chances are, you’ve never seen a production of Godspell like the one heading into its final 2 weeks at The Eagle Theatre.  Performed “In the Round,” the play lives in an entirely different atmosphere - one in which the audience is very much part of the show and the theatre becomes a virtual playground for the actors.  The end effect is like somewhere being part of a Church revival rather than simply watching one and seeing an episode of Schoolhouse Rock performed live on stage.

Eagle’s Godspell is an updated version of the classic musical featuring music by Stephen Schwartz which was a hit on Broadway in the early 1970s. The play explores the Jesus Christ story in a way you won’t find in Church.  Christ and his disciples learn and discuss parables, play games, and sing songs while the play leads ultimately to the crucifixion.  It’s one of the rock and roll inspired musicals that generally appeals to people who don’t like traditional musicals.

The updates incorporate mentions of movies from Star Wars to Indiana Jones to Lord of The Rings; adds a little rap music; and includes audience members in rounds of Pictionary and Charades.

“This presentation has been one I’ve been dreaming up for years,” explained Director Ted Wioncek III.  “My goal was to use a ‘story theatre’ style in order to provide freedom while using a range of high comedy and low puns, broad physical gags, meta theatrical anachronisms, and deep sentiment.  The script has been rewritten, the music revamped, actors play instruments, and the environment is immersive.”

According to Wioncek, Eagle is able to reconfigure its seating and sets as often as they see fit.  Normally this only affects the first few rows, but for Godspell it led to an entirely new experience.

The production includes a slew of actors making their return to The Eagle Theatre including Sal Pavia, Tim Rinehart, Rajeer Alford, Will Connell, Maggie Griffin-Smith, Cailene Kilcoyne, Loulou Luzi, Justin Mazzella, and Kimberly Suskind.  Rounding out the cast are a pair of newcomers to Eagle (Abigail Allwein and Madalyn St. John). Wioncek’s direction keeps everything moving quickly and utilizes both sides of the theatre well.  Considering some (if not all) of the actors are likely performing their first production “in the round” - they are tremendous in utilizing the space around them. 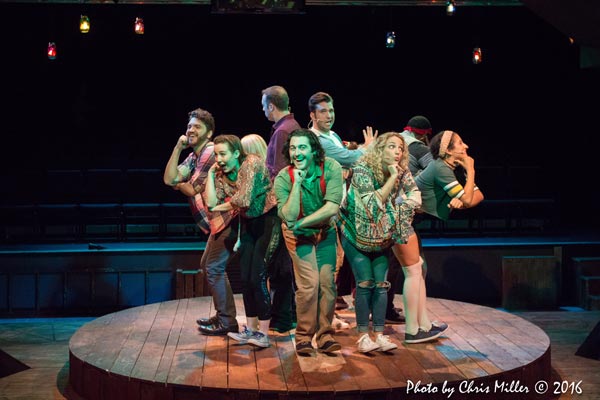 The cast, led by Sal Pavia as Christ is exceptional.  Sal is energetic, funny, and inspiring while the disciples all have the right blend of amazement, wonder, love, and dashes of being members of a cult.  Each cast member performs instruments live on stage, which looks and sounds terrific in the way the production is staged.  Some instruments and songs are literally performed next to the audience.

The music is strong throughout but highlights for me included the wonderful “Day By Day” (which actually shook the room with applause, foot stomping, and dancing while music filled the theatre), “Learn Your Lessons Well,” “By My Side,” “Beautiful City,” and “On The Willows.”  While the room is full with beautiful guitars and drums, it’s worth highlighting the wonderful violin playing of Abigail Allwein which adds color to several songs.

In the end, Godspell is a tale about parables and lessons, and the dangers of failing to learn the messages.  You do not have to be religious at all to enjoy the music and comedy, but hopefully some of the messages will stay with you.  For me, the biggest take home was “If you only love those who love you, where is the extraordinary in that?”  The message of love your enemies is rather appropriate after such a divisive election as the one we just had.

Godspell runs Wednesday through Sunday, now through December 11.  The Eagle Theatre is located at 208 Vine Street in Hammonton. For more information visit www.theeagletheatre.com

This was our first time visiting The Eagle Theatre in Hammonton as we make our rounds through the dozens of professional theatres in the Garden State.  Hammonton appears to have a very cool downtown from what we saw.  There is a wonderful wine bar basically across the street from the theatre, a coffee shop, and several restaurants all within walking distance.  And speaking of wine, The Eagle Theatre has a wine bar inside its lobby for Sharrot Winery where you can purchase half or full bottles of wine from the local winery and enjoy before, during, or after the show. 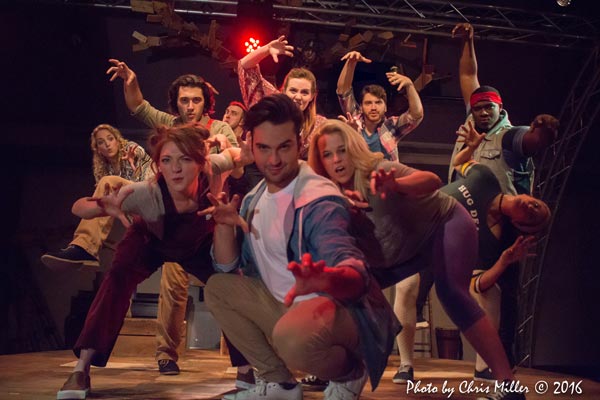