REVIEW: Angels and Ministers of Grace

(LONG BRANCH, NJ) — There's a lot going on during Angels and Ministers of Grace and nothing much going on. The latest world premiere at New Jersey Repertory Company offers quirky characters, multiple storylines, and fine acting, but gets a bit lost during the way and winds up resembling a soap opera.

The play by Elaine Smith focuses on the world of a close knit family living on a farm in Florida. There is the smart one (Miriam, played by Dana Benningfield), the dumb one (Jimmy Ray, played by David Van Pelt), and the crazy one (Arletta, played by Maureen Silliman). Together they are trying to get through the 7th anniversary of the day Miriam's daughter died in a drowning accident — a day that would change all of their lives. Surviving the anniversary is one of many storylines in the play, something which restricts the play from reaching its full potential.

A major storyline involves the many craft angels created by Arletta. She does not sell the angels, they are designed to protect the family because they could not protect Miriam's daughter. Some in the town think of her as crazy because she has psychic visions. The main problem is that her visions, like her most recent one, aren't always clear.

Another major storyline involves the health of Miriam. She is supposed to have important medical tests conducted, but keeps putting them off. On several occasions, she reminds her siblings that they should worry about what will happen when she's no longer around. This is a rather unsubtle way of saying that she knows she is dying. She also doesn't care. Without her daughter, she doesn't have much to live for anymore. 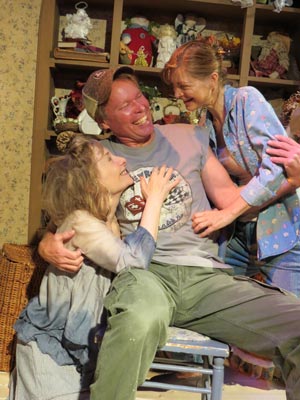 Smaller side storylines involve the relationship between Miriam and her ex; who was to blame for the daughter's death; how to get Arletta out of the house and into the real world again; and whether Jimmy Ray can ever find a job.

I understand the playwright's goal of bouncing all of these storylines around the anniversary of the child's death, but the end effect is that none of the storylines are fully realized and they all wide up kind of muddled. The storylines all seem to balance one another out to the point in which the play moves at the exact same speed until the very end when there is a lot of action. You don't need people yelling or throwing things in every scene, but a little variety helps. For example, rather than simply getting a shotgun as a threat, why not have it go off? Break the monotony a bit?

Performance-wise, David Van Pelt steals the show as Jimmy Ray. He's a dead-ringer for some of the good ol' boys I saw while living in the south. His scenes are often funny and actually include some of the most insightful comments in the play.

There are good elements in Angels and Ministers of Grace, but the play would benefit from a choice as to which storyline is the strongest and an application of focus. Having many things happening simultaneously may be real life, but it doesn't always make for good theater.

Angels and Ministers of Grace runs now through November 23 at 179 Broadway, Long Branch, NJ. The production is directed by Marc Geller. For more information or to purchase tickets visit www.NJrep.org