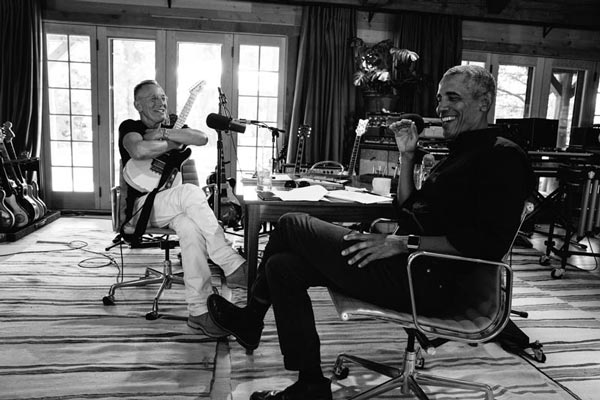 RENEGADES: Born in the USA chronicles the conversations Barack Obama and Bruce Springsteen began in Spotify’s co-produced podcast of the same name. During these intimate conversations, they share exclusive stories and ruminations about life, music, and their enduring love of America, with all its challenges and contradictions.

Published in an oversized, fully illustrated format, RENEGADES also features rare and exclusive photographs from the authors’ personal collections and never-before-seen archival material, including Springsteen’s handwritten lyrics and Obama’s annotated speeches, offering a compelling and beautifully illustrated portrait of two outsiders—one Black and one white—who have helped shape the American story. The end result is like a museum exhibit.  If you were a listener to the podcast, you will learn a lot more; and. if you are coming to these conversations for the first time, you're in for a real treat.

“We started at the start: growing up our similarities, our differences,” explained Springsteen in his Introduction.  “Hawaii, New Jersey… pretty different; absentee fathers… pretty similar. We then let the conversation expand as life itself does.  We explored the way you start to put together an identity, from a pose, a photo, a piece of music, a movie, a cultural hero.  We examined the way you struggle to find your strengths, your potency, your manhood.  We delved into how that shapes your art, your politics, and the way you are going to live your life.  It was all about life and how it is lived, the world as it stands and the efforts we have made to shape that world, me through my music and Barack through his politics, into the kind of place we feel it should be.”

Some of the most passionate conversations were about their fathers and facing the question: what does it mean to be a man? How they both strived to prove their worth to someone who wasn’t there - both men wrestling with ghosts. 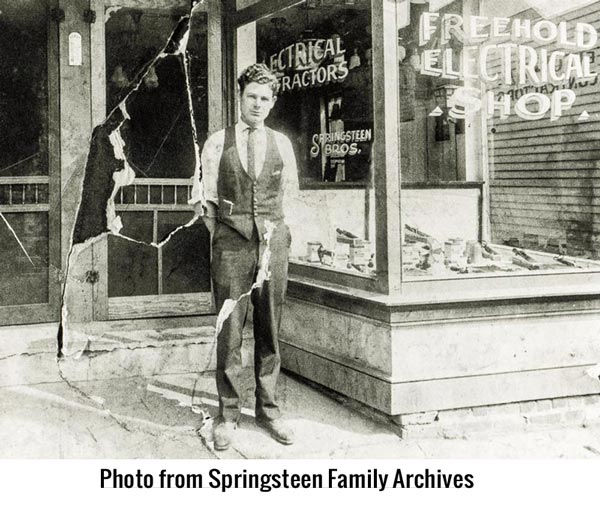 “Ghosts are tricky because you are measuring yourself against someone who is not there,” explained Obama.  “And, in some cases, I think people whose fathers aren’t there - and whose mothers are feeling really bitter about their fathers’ not being there - what they absorb is how terrible that guy was and you don’t want to be like that guy.”

Further on in the conversation, Springsteen adds, “Ghosts haunt you.  Ancestors walk alongside you and provide you with comfort and a vision of life that’s going to be your own.  My father walks alongside me as my ancestor now.  It took a long time for that to happen.”

Both men were fortunate to find strong, independent women to push them, challenge them, and ground them when needed.

“I always say that the degree to which Michelle and those girls sacrificed and lifted me up kept me going and prevented me from either getting cynical or despairing,” said Obama.  “It reminded me why I was doing what I was doing and spurred me on, because this job, this work, what I’d accomplished - it needed to be worth the time that I’d spent away from them, the birthday parties or the soccer games or whatever it was that I’d miss. It better count.” 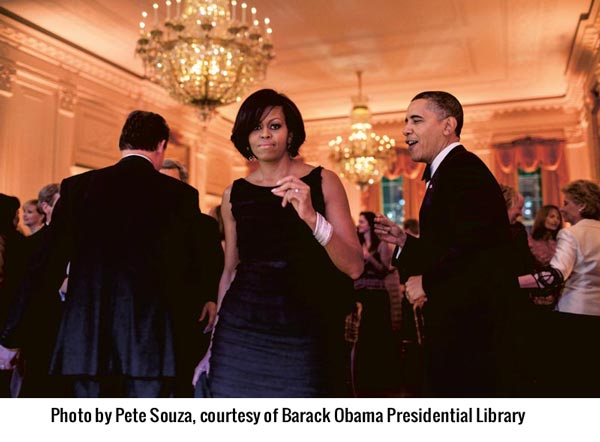 Springsteen joked, “I know it was tough being president, but let me explain to you how hard it is making an album.”

On a more serious note, Springsteen spoke of what he learned through raising his kids.  “I learned, one, I was not my father. I didn’t have to chase that ghost or worry about that anymore.  That was a part of my past.  And, two, be present in this world wherever you are at any given moment.  Be present in their lives.  Because I used to think, if somebody interrupted me while I was writing, ‘What the —- Holy smokes! Do you know the great thoughts I’m thinking right now?’”

Among the original hand written song lyrics found in the book are the words to “My Father’s House” - a beautiful song on the Nebraska album.  In the song, Springsteen dreams that he was a child running back to his house.

I ran with my heart pounding down that broken path / with the devil snappin’ at my heels / I broke through the trees, and there in the night / my father’s house stood shining hard and bright the branches and brambles tore my clothes and scratched my arms / But I ran till I fell, shaking in his arms / I awoke and I imagined the hard things that pulled us apart / will never again, sir, tear us from each other’s hearts - “My Father’s House”

“Over the years, what we’ve found is that we’ve got a shared sensibility,” added Obama. “About work, about family, and about America. In our own ways, Bruce and I have been on parallel journeys trying to understand this country that’s given us both so much. Trying to chronicle the stories of its people. Looking for a way to connect our own individual searches for meaning and truth and community with the larger story of America.”

If you ever wanted to learn more about Springsteen or President Obama, RENEGADES is a great way to peak behind the curtain and see how they became the men they are.  And there’s something nice about a guy roaming the same Jersey streets as you sharing stories with a man that once was the most powerful person in the world.