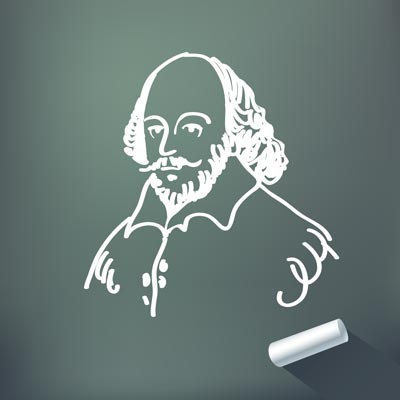 In a rare departure from the classics, Shakespeare himself will make an appearance on stage in the next production at The Shakespeare Theatre of New Jersey.  The company is presenting the New Jersey Premiere of Equivocation by Bill Cain from September 16 through October 4.  The play takes us behind the scenes as Shakespeare is made an offer he cannot refuse by the Prime Minister of England.

“What if Shakespeare had been hired by the Government of England to write the official dramatic account of the Gunpowder Plot?” asked James Michael Reilly, a veteran member of The Shakespeare Theatre of New Jersey who portrays Shag (short for Shagspeare, the contemporary spelling of The Bard’s name).  “And then, what if in attempting to create that presentation he discovered that the Government’s story did not hold together? It’s a realization that he and his acting company were faced with a very stark choice - lie or die.”

“It’s life or death stakes and a moral dilemma,” continued Reilly.  “If he wasn’t someone that didn’t want to lie there wouldn’t be a problem.  But the reality of this time period was that when you said something on oath, you literally were putting your mortal soul at stake saying that this was the truth.  The idea of lying is charged for them in a different way than it is in our society now.  The play is a dramatized examination of a hypothetical event.”

The play is inspired by the actual Gunpowder Plot, which took place November 4-5, 1605.  A man named Guy Fawkes was found walking around a cellar under the British Parliament building.  When the area was searched, they discovered roughly 20 barrels of gunpowder.  “During a torture session on the rack, Fawkes revealed that he was a participant in an English Catholic conspiracy to annihilate England’s Protestant government and replace it with Catholic leadership.”

The 5th of November was established as a day of public thanksgiving by Parliament in 1606 and is still celebrated today with “Bonfire Night” which includes fireworks, bonfires, and the burning of dolls meant to represent Guy Fawkes.  It is thought of by many as the founding event of the modern England.

According to the playwright in the play’s opening notes, “The only thing we know with certainty about the event itself is that it could not possibly have occurred in the way the government claimed.”  Equivocation is presented as a plausible alternative for the official story provided by the government and told for over 400 years.

When first approached with the project, Shakespeare is reluctant to take on the work.  He tells the Prime Minister that, “We don’t do current events.  We do histories.  True histories of the past.”  He knows that there is very likely a difference between the truth and the story the King wishes to be presented — a point made rather clear when the Prime Minister tells him that there is one request, “The King wants witches.  There needs to be witches.”

“The choice of lie or die is a very stark no win choice for Shakespeare and part of the response is equivocation,” explains Reilly.  “That is defined by the person who introduces the concept into the play as how to tell the truth in difficult times.”

Directed by Paul Mullins, the cast includes Reilly, Therese Barbato, Dominic Comperatore, Kevin Isola, Rob Krakovski, and Matthew Stucky.  These six actors play many roles.  The constant turnover with actors moving from one role to another adds to the mayhem on stage and the craziness of the situation.

“Sometimes I am having a conversation with someone who is a member of my acting troupe and in an instant they turn into one of the other characters that they play,” explained Reilly.  “It’s almost like a dramatic reenactment of thoughts popping in my head and connections forming that have not previously been formed.”

Reilly admits that portraying Shakespeare has “bumped up the overall energy level of my life by 25-30 percent.”  He describes his role as exciting and inspiring, while also frightening and challenging at the same time.

One of the major themes the play touches on is whether or not governments have a responsibility to always tell the truth.  Did Guy Fawkes truly tell the government of the plan under torture or does England forbid the use of torture? What will the “official” historical account be?  And how can Shakespeare walk the fine line and stand by his choice?  Some of these issues will undoubtedly sound familiar to the audience as the American government has been repeatedly accused of lying to the public.

The playwright visited the company early on in rehearsals and gave Reilly a unique piece of advice.

“One of the things Cain said was ‘don’t beg and don’t plead — demand! If you beg or plead, my material will not support you.  The characters are demanding things from each other.’  That was illuminating because some lines could sound like begging — especially when Shakespeare is talking to the Prime Minister of England.  It would be an understandable trap to fall into to say what I’m doing here is pleading or begging, but no… not in this world.  Not in the world that Bill Cain has created,” said Reilly.