(ASBURY PARK, NJ -- JUNE 27, 2010) -- Three of New Jersey's finest singer-songwriters were on bill for the release of Anthony Walker's new EP, The Sun Goes On Forever, which took place Sunday night at Rosie's Cafe. Preceding Walker was an all-too-rare performance by Janey Todd and a homecoming show of sorts for Allie Moss.

Rosie's Cafe is a wonderful, monthly show that takes place at the Atonement Lutheran Church at the corner of First Avenue and Heck. It's the perfect setting for artists like Janey Todd, whose music deserves the quiet and attentiveness that only a listening room can provide. Since there isn't such a room in Asbury Park, Brenda Wirth utilizes this Church to accomplish the same goals. Attendees are devoted music fans who crave to hear every chord and savor every lyric. You can often hear a pin drop while the artists are on stage and Sunday night was no exception.

Janey Todd led off the show with "Johnny Boy", a slow, haunting number that featured quiet strumming - exactly the kind of song that would get lost within your average bar performance. I wish I was able to catch Janey live more often. I joked with her afterwards that I saw her live every other year - partly my fault and partly because Janey simply doesn't play out nearly as much as she should. With a set that included such brilliant songs as "Snakeskin Boots", "Dreamland", and "Alcatraz", I sincerely hope I don't have to wait another two years before I see her again.

Up next was Allie Moss, a local performer who has been touring the world as a member of Ingrid Michaelson's band. When I see her on stage these days, I can't help but think that the experiences she's had with Ingrid have been a huge benefit to her stage presence, her songwriting, and her comfort with the audience. She's clearly at home on stage right now.

"I like to look around and see all of the faces and see who I recognize," said Moss. "There are a lot of familiar faces here that have seen me perform since I was like 16. It’s kind of embarrassing!"

Allie had friends, family, and fellow Asbury Park musicians among her fans in the audience. Those who regularly attend shows at the Twisted Tree Cafe would recognize Allie's Grandmother, who wouldn’t miss this show for the world. She's always been proud of her Granddaughter and for good reason. If someone was seeing Allie for the first time that night they would have heard a virtual "best of" Allie Moss through a setlist that contained songs like the beautiful "Passerby", wonderfully quirky "Melancholy Astronautic Man", poignant "Corner", and the mesmerizing "Dig With Me", which sounded simply amazing with the crowd singing “lean our weight” alongside Allie at the end amidst a rather magical looking backdrop of stars in the night. The image was like something taken from the script of a Walt Disney film.

Her set also included a brilliant cover of "Poughkeepsie" by Over The Rhine and a couple of new songs: "Late Bloomer" and "Leave It All Behind". Her voice never sounded better and the new songs are just as good as her best work to date. Her travels have also brought her great pearls of wisdom that she was more than glad to share with the audience.

"I'm a perfectionist in life, but I think I've gotten over that due to Twitter," said Moss. "A lot of times, I make spelling errors and it's my challenge to keep those errors hanging out there in the universe. If you're having trouble letting go of things, set up a Twitter account!"

After Allie it was time for Anthony Walker to make his debut - literally. For several years, Anthony Fiumano has been a mainstay in the Asbury Park music scene. With the release of his new record, he has changed his stage name to Walker. This being either the first or one of the first times performing under that name he admitted quietly, "I have to get used to that," after Brenda Wirth announced him with the new name. For those who spent years learning how to properly pronounce Fiumano take heed, the new name has a twist - "The 'R' is silent. It's French." At least, that's what he told me on Twitter!

His appearance at Rosie's Cafe was not just a record release party, but a gathering of friends and fans that have followed him for years. He took turns performing solo and with Joanna Burns, Amanda Duncan, and his complete band. What I enjoyed most was hearing Anthony tell the stories behind his songs - many of which I had never heard before. Such as the story behind "Taking You With Me", a song which will be released on his full band's upcoming record that was written during a 30-hour ride to Austin, Texas for last year's South By Southwest music festival. Another was a tale about "The Year Of The Flood" - one of his earliest songs that originated from an attempt to cover "Mercedes Benz" by Janis Joplin with the introduction of a new guitar part. His father was listening and said, “wow, I haven't heard that since the year of the flood.” Ten minutes later the song was born. An even more personal story was how one of his signature tunes ("Darlene") was directly inspired by hearing Janey Todd's "Dreamland" for the first time. It’s great to hear local artists reveal inspirations that stem from hearing the music of fellow local artists. Moments like that just put the entire local scene in a great light.

Tonight's setlist was full of songs that spoke of love lost and love gained, but always done passionately. One of my favorites was "Taking You With Me", which should be a single from his upcoming record.

"I'm taking you with me when I go...
it's where you belong, you're at home
'cause there ain't nothing left, nothing left that I know"

The overall show was one of the best performances I've ever seen Anthony give. In fact, his version of "Darlene" tonight was simply breathtaking. This song contains lines that English majors like myself wish they had written like:

"I've always wondered what you'd think
You've read so many books you only dream in ink
And every time you let it go it sinks
Down some sad familiar page
The words are softer now Darlene
So make adventure out of me
If every chapter ends in misery
Believe me, I believe in you, Darlene"

Anthony was in great spirits all night, cracking jokes in between songs. He pointed out how several people had told him this was their first time in Church on a Sunday in a long time and he admitted that was probably true for him as well. He joked about writing down a setlist because whenever he doesn't he winds up playing Neil Diamond tunes and laughed when he said they were up to the final song of the EP. "I say that like it's a big thing. There's only three songs on the EP, so every song could be the last! The whole thing is like 9-10 minutes long. My band has played songs that long -- there are even people in this room who have written songs that long," he said while searching the crowd for George Wirth.

He spoke of often thinking about Neil Young and told tales of going to Bed, Bath & Beyond to pick up some candles for the show and then wondered, "What exactly is the beyond part? Maybe you have to work there to find out. Maybe I'll get a job there... or become an astronaut... or a marine biologist, I've always wanted to be a marine biologist."

The setlist included songs like "Forget The Railroad," "Rosie", "House On A Hill", "Light Of Mine", "The Year Of The Flood", "Darlene", "Song Of The Willing", and "I Hope This Helps".

He also performed great covers of 'Birds" by Neil Young, "Red Right Ankle" by The Decemberists, and Bill Fay's, "Be Not So Fearful" - a song from an album with one of the worst album covers of all time said Anthony. He described it as a man walking on water, "so, I guess I have to play it in a Church, right?"

Amazingly, his full band, which accompanied him on a couple of songs, included a pair of guitarists, upright bass, pair of cellos, and a violinist. At other times during the night, he was aided by the help of a lap steel guitar, grand piano, and banjo. The acoustics in the room captured every single note with tremendous precision to make for an insanely good show and I couldn’t stop thinking that the guy on lap steel was from the movie, "The Hangover" - the two really look alike!

He came back for an encore of Bob Dylan's, "Girl Of The North Country" and then hung around after the show signing CDs for the crowd. Although the EP is basically a digital-only release, they did create about 250 CDs - so, there is now an official Anthony Walker collectable running around.

If you weren't on the Anthony Fiumano bandwagon, you missed out on something great. He was one the best emerging folk artists I've heard in quite a while. Thankfully, this guy Anthony Walker has promised me that he plans on continuing to forge ahead not only with his rock and roll band side, but the tremendously gifted folk side as well. We may all have to get used to hearing the new name, but the music remains the same and, after all, that's all that really matters. 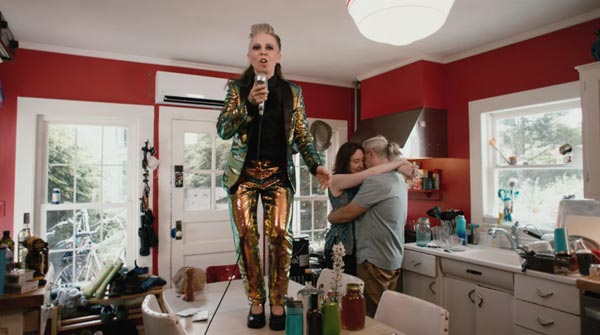