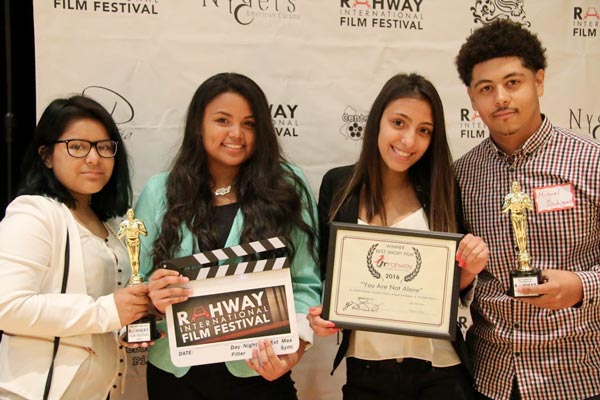 Students Izellah Montes, Kayleen Ojeda, Miguel Rodriguez, & Yamileth Tepox of Abraham Clark High School in Roselle, NJ, who were all 15-16 years old and in Grade 10 at the time, created the short film “You Are Not Alone” about the dangers of bullying.  They were the winners of the “Best Film of the Festival” at the Rahway Film Festival Junior 2016.  As part of their prize, the students will be appearing on Edison TV’s “Classic Movies with Ron MacCloskey” and will screen their film once more for the RIFF audience on Sunday, October 23, 2016 at 3:15pm.  They are filming their episode of “Classic Movies with Ron MacCloskey” on October 5, 2016 with the air date yet to be determined.

Cadian McGaw Jr. of Marist High School in Bayonne, NJ, who was 15 years old and in Grade 9 at the time, took home the “Audience Choice” award for his short crime thriller, “Keeping Up with the Society Hillians: Society Hill Victims Unit.”  He too will be appearing on Edison TV’s “Classic Movies with Ron MacCloskey” and will screen his film once more on Sunday, October 23rd at 3:15pm.  He will share the episode of “Classic Movies with Ron MacCloskey” with the other winners.

For the full lineup, more information, and synopses and trailers for each film, please visit www.rahwayfilmfest.com.