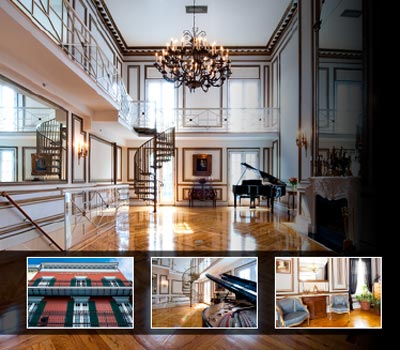 (WESTFIELD, NJ) -- A new year brings new changes for Rahway International Film Festival, who is kicking off 2017 by growing into the non-profit organization, Big Dreams and Silver Screens, and with the expansion comes a brand new relocation. Rahway International Film Festival, a Big Dreams and Silver Screens Production, will now call Westfield, New Jersey home.  The James Ward Mansion, an architectural wonder in Westfield, will host the 5th Anniversary of RIFF in 2017.

The James Ward Mansion is a New Orleans Style mansion, which offers the perfect setting in which filmmakers can celebrate their latest creations.  The festival boasts screenings of short and feature length films from across the world, seminars led by industry professionals, VIP parties and more.

RIFF has previously called Hamilton Stage for the Performing Arts in Rahway, NJ home for the past four years.  “Hamilton Stage and Rahway will forever have a special place in our hearts as they have provided us with the opportunity to grow and become who we are today.  Our departure is bittersweet but change begets growth and we are excited at the opportunity to evolve and grow as we move forward” says festival founder and director, Gina Marie Rodriguez.

The 5th Anniversary of the Rahway International Film Festival, a Big Dreams and Silver Screens Production, will take place from September 22nd through September 24th of 2017.  Festival Submissions opened on February 1, 2017 exclusively through FilmFreeway.

The Rahway International Film Festival is a “Big Dreams and Silver Screens” program, first held in June of 2013 in an effort to create a warm and welcoming home for independent filmmakers and fans of film in New Jersey and the surrounding area.  They annually showcase short films, feature films and music videos while offering seminars and networking opportunities to those interested in the film industry.

As a women-led festival in a primarily male-dominated industry, we are dedicated to showcasing an equal ratio of films by female and male filmmakers in keeping with equality. They are excited to offer some of the best emerging artists. The festival has proven to be an impressive starting ground for filmmakers, including RIFF alum and 2014 Audience Choice Award winner, Temi Tokosi who was selected to attend the Creative Minds Film Institute at the Cannes Film Festival in 2015.