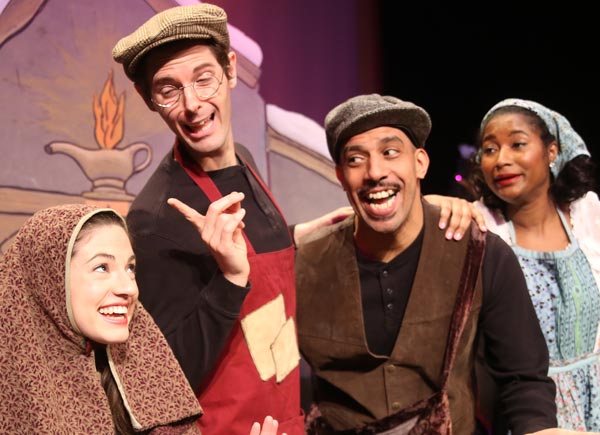 Pushcart Players, New Jersey’s Emmy nominated and award-winning touring theater for young audiences presents “Holiday Tales - A Season of Miracles” in virtual on-line presentations in late November and December. This magical musical warms the hearts of family audiences with the true spirit of the December holidays of Christmas, Chanukah, and Kwanzaa, and families can view the production from the comfort of their homes.

“…A Season of Miracles” visits O. Henry’s ‘The Gift of the Magi’; an original scene in Nigeria entitled ‘The Kwanzaa Kite’; a story based on the wise men of Chelm folklore called ‘The Chanukah Miracle’; and E.T.A. Hoffmann’s ‘The Nutcracker.’ Every tale reflects the spirit of the holidays and the people that celebrate them. Music and orchestrations are by Tony Award-winning composer, Larry Hochman, book is by Pushcart co-founder, Ruth Fost, and direction is by artistic director Paul Whelihan.

“As for miracles?” noted Fost, “they are within us all and at the heart of each story. Miracles are the gifts of love, kindness, caring, and sharing.”

Larry Hochman has a career as composer and orchestrator for over 40 years that encompasses theatre, film, recordings, concerts, television, and video games. Most well known as for his work in theater, Larry has orchestrated over a hundred musicals. He has 18 Broadway shows to his credit and has won the Tony Award (“The Book of Mormon”), two Drama Desk Awards, and The Outer Critics Circle Award (“Hello, Dolly!”). He has received 9 Tony Award nominations, and 9 Emmy nominations.

Castillo, a native New Yorker, is a graduate of Kean University with a BA in theater. He is a founding member of The Theatre Project. For the past 18 years Oscar has been a member of Pushcart Players performing for young audiences throughout the US. Oscar also performs throughout New York City with Peculiar Works Productions.

Dana Patrice performed in Lighthouse Opera of NJ’s production of “Ragtime” at South Orange PAC. She was featured in CDC theater’s stage in “Vagina Monologues” and “Once Upon a Mattress.” She appeared in “Expiration Date” at The Tank in NYC for the Wet Paint play festival, OLT’s “Side Show, The Musical” and “Aida.”

PHOTO: Pushcart Players in “Holiday Tales - A Season of Miracles” by Richard Kowalski