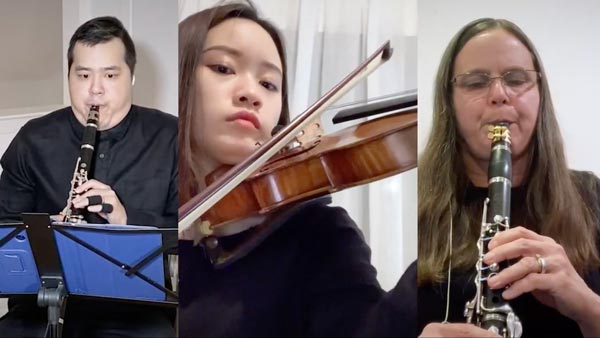 The PSO’s assistant conductor, Nell Flanders, is curating the project, which is being individually recorded in musicians’ homes then combined digitally. Each segment features 1-6 musicians, and is hosted by Flanders who introduces the music in tandem with conversations centering on Bach and his work. Each episode is free to the online community. The project is a community extension of the orchestra’s PSO BRAVO! Education Programs, and includes plans to actively involve student musicians of the Youth Orchestra of Central Jersey and Trenton Music Makers in supplemental programming.

PSO Executive Director Marc Uys says, “These recorded presentations of Bach’s music are a gift from the Princeton Symphony Orchestra with participation by almost all of the PSO’s tenured musicians. We’re pleased to be able to offer this excursion into Bach’s measured world, a mental escape from the pandemic stresses of today. For students of music, there is an opportunity for hands-on exploration of Baroque music forms such as canon and round.”

Nell Flanders holds the recently named position of Princeton Symphony Orchestra’s Georg and Joyce Albers-Schonberg Assistant Conductor. She brings her varied experiences as a professional conductor, violinist, and educator to her work, and has conducted the orchestra in ballet, popular classics, and holiday concerts. Ms. Flanders is deeply committed to educating the next generation of musicians and music lovers. Through a partnership of the PSO and the Youth Orchestra of Central Jersey (YOCJ), she now serves as the conductor of the YOCJ’s Symphonic Orchestra.

This PSO BRAVO! program is free to the general public thanks to the support of generous sponsors who believe in arts education. To learn more about PSO BRAVO! education programs or to offer support, call the symphony office at (609) 497-0020.

The Princeton Symphony Orchestra’s acclaimed PSO BRAVO! education programs reach more than 10,000 students each year. Meet the Orchestra! establishes PSO musicians in teaching partnerships at more than 30 public, private, and special-needs elementary schools throughout Central New Jersey, and stages full-orchestra performances for elementary school students each spring. At the middle school level, Listen Up! invites students to attend Classical Series concerts and create visual art in response to the music they hear. Advanced high school and college instrumentalists participate in public masterclasses with world-renowned artists. From kindergarten through college, PSO BRAVO! inspires the next generation of musicians and audiences.

The Princeton Symphony Orchestra (PSO) is a cultural centerpiece of the Princeton community and one of New Jersey’s finest music organizations, a position established through performances of beloved masterworks, innovative music by living composers, and an extensive network of educational programs offered to area students free of charge. Led by Edward T. Cone Music Director Rossen Milanov, the PSO presents orchestral, pops, and chamber music programs of the highest artistic quality, supported by lectures and related events that supplement the concert experience. Through PSO BRAVO!, the orchestra produces wide-reaching and impactful education programs in partnership with local schools and arts organizations that culminate in students attending their first live orchestral performance. With considerable community support and funding from the National Endowment for the Arts, the PSO is also a multiple-year recipient of the New Jersey State Council on the Arts’ highest honors. The PSO has been recognized for its commitment to new music with an ASCAP Award for Adventurous Programming and a Copland Fund Award. The only independent, professional orchestra to make its home in Princeton, the PSO performs at historic Richardson Auditorium on the campus of Princeton University.