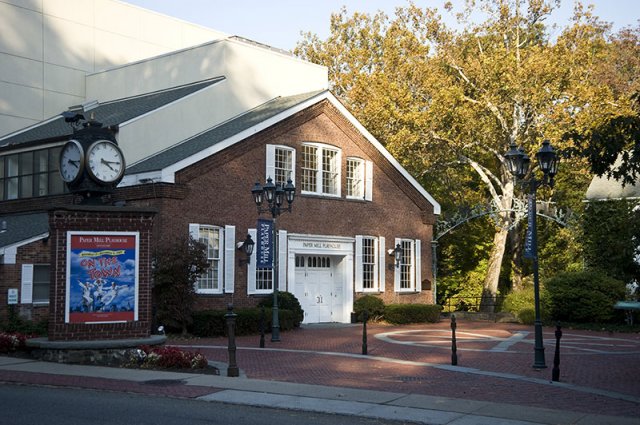 (MILLBURN, NJ) -- Paper Mill Playhouse has announced the lineup for its 2018-2019 season with three premieres and a total of five musicals.  The season includes Unmasked by Andrew Lloyd Webber,  Irving Berlin’s Holiday Inn, My Very Own British Invasion, Benny & Joon, and Disney’s Beauty and the Beast.

Paper Mill Playhouse will open its 2018-2019 season with a world-premiere musical, Unmasked (September 27-October 28), about the remarkable life and celebrated work of Andrew Lloyd Webber. Unmasked will be a funny and warm musical portrait drawing from Andrew’s extensive body of work, with intimate and sometimes unexpected interpretations of his best-loved songs, rediscovered gems and some new material specially written for this production. Next, a family musical just in time for the season, Irving Berlin’s Holiday Inn (November 21-December 30), comes to Paper Mill Playhouse, based on the beloved Bing Crosby/Fred Astaire film. This heartwarming, toe-tapping production features more than 20 classic songs from the Berlin catalog, including “Easter Parade,” “Cheek to Cheek,” “Steppin’ Out with My Baby,” and “White Christmas.” Next winter, Paper Mill Playhouse presents the world-premiere musical My Very Own British Invasion (January 31-March 3), directed and choreographed by Jerry Mitchell. The 1960s British music scene comes to life with songs from Herman’s Hermits, The Beatles, The Rolling Stones, Petula Clark, The Moody Blues, and other legendary bands of the era. The spring brings the East Coast premiere of Benny & Joon (April 4-May 5). Based on the 1993 film which starred Johnny Depp and Mary Stuart Masterson, this new musical is a smart, funny, tender-hearted celebration of love: between children and parents; romantic partners; friends; and, most of all, siblings. The final production of the season, Disney’s Beauty and the Beast (May 29-June 30), an international sensation that has played to more than 35 million people in 13 countries. Based on the Academy Award–winning animated feature, the stage production includes all of the original songs from the movie by Alan Menken and Howard Ashman, plus additional gems by Menken and Tim Rice.

“Paper Mill Playhouse is thrilled to produce two world premieres, an East Coast premiere, and a season of all musicals in our exciting 2018-19 lineup,” commented Mark S. Hoebee, Producing Artistic Director of the Millburn theater. “Producing new works is central to our vision of becoming recognized as one of the most important incubators of new musical projects. We're opening our doors to collaborate with and host the top talents of musical theater, both established artists like Andrew Lloyd Webber and up-and-coming playwrights and composers."

“Paper Mill Playhouse’s 2018-2019 season is one of the most exciting lineups in our theater’s history,” remarked Managing Director Todd Schmidt. “The only way you are guaranteed a seat to these amazing premieres is to become a Paper Mill Playhouse subscriber. Subscribers get the best seats at the best price with special insider benefits.  Of course, none of what we do would be possible without the generous support of our subscribers, donors, patrons, foundations and corporate partners, including the many years of season sponsorship from our friends at Investors Bank.”

“Investors Bank continues to be a proud season sponsor of Paper Mill Playhouse because of the phenomenal productions and amazing value it brings to the community. Paper Mill offers high quality theater and makes it accessible to everyone," said Investors Bank President and CEO Kevin Cummings. "But almost more important, Paper Mill offers nearly 40,000 students each year with engaging and unique educational opportunities that would not otherwise be available to them. Arts education is so important to our younger generation’s development."

Paper Mill Playhouse will produce eight performances a week, Wednesday through Sunday. Three, four and five-show subscription packages are available now starting at just $111. Each subscription package includes a different level of special benefits. Youth subscriptions are available for children ages 4-18 with the purchase of an adult subscription with accessible discount pricing. Single tickets will go on sale on August 20 starting at just $35. Tickets and subscriptions may be purchased by calling 973.376.4343, or at the Paper Mill Playhouse Box Office at 22 Brookside Drive in Millburn, or online at www.papermill.org.  Visa, MasterCard, Discover and American Express accepted.  Groups of ten or more can receive up to a 40% discount on tickets and should call 973.315.1680. Titles, casting and dates subject to change.

UNMASKED - September 27–October 28; Music by Andrew Lloyd Webber; Lyrics by Various Artists; Co-created by Richard Curtis and John Doyle; Choreographed by JoAnn M. Hunter; Directed by John Doyle. One of the most successful musical theater composers of all time takes audiences behind the scenes in Unmasked, a world-premiere musical about Andrew Lloyd Webber’s remarkable life and celebrated work. Based on his recently released autobiography, Unmasked offers an intimate look at Lloyd Webber’s five decades in the spotlight and beyond, from his quirky family and bohemian youth in London to the creation of such smash hits as Jesus Christ Superstar, Evita, Cats, The Phantom of the Opera, and Sunset Boulevard. You’ll be delighted (but perhaps not surprised) to learn that the man behind the mask is just as captivating as the shows he has brought to the stage.

IRVING BERLIN’S HOLIDAY INN - November 21–December 30; Based on the film from Universal Pictures; Music and Lyrics by Irving Berlin; Book by Gordon Greenberg and Chad Hodge; Choreographed by Denis Jones; Directed by Gordon Greenberg. In this musical based on the beloved Bing Crosby/Fred Astaire film, Jim Hardy leaves behind the hustle and bustle of showbiz for a quiet life on a Connecticut farm. Jim’s agrarian efforts are a flop, but things start looking up when he falls for a talented schoolteacher, and together they infuse their sleepy rural setting with some Broadway razzle-dazzle. Fresh from a Broadway run, this heartwarming, toe-tapping production features more than 20 classic songs from the Berlin catalog, including “Easter Parade,” “Cheek to Cheek,” “Steppin’ Out with My Baby,” and “White Christmas.”

MY VERY OWN BRITISH INVASION - January 31–March 3; Book by Rick Elice; Music by Various Artists; Directed and Choreographed by Jerry Mitchell. The 1960s British music scene comes to life in a world-premiere musical featuring songs from Herman’s Hermits, The Beatles, The Rolling Stones, Petula Clark, The Moody Blues, and other legendary bands of the era. My Very Own British Invasion is a fable of young love as British Rock explodes around the world loosely based on the experiences of Peter Noone, who was just 15 when he rose to international stardom as the lead singer of Herman’s Hermits—and England became the center of the rock and roll universe. Grab a pint and get a front-row seat to an electrifying moment in music history. This show contains adult content.

BENNY & JOON - April 4–May 5; Book by Kirsten Guenther; Music by Nolan Gasser; Lyrics by Mindi Dickstein; Based on the Metro-Goldwyn-Mayer motion picture written by Barry Berman and Lesley McNeil; Choreographed by Scott Rink; Directed by Jack Cummings III. Based on the 1993 film which starred Johnny Depp and Mary Stuart Masterson, this new musical is a smart, funny, tender-hearted celebration of love: between children and parents; romantic partners; friends; and, most of all, siblings. The pair at the heart of the show are Joon, a young woman dealing with mental illness, and Benny, the big brother who’s determined to take care of her. When a charmingly eccentric stranger comes into their lives, he throws their carefully calibrated world off-kilter—maybe for the better. Large in emotional scope and artistic ambition, Benny & Joon embraces a difficult subject with warmth, honesty, and wit.

DISNEY’S BEAUTY AND THE BEAST - May 29–June 30; Music by Alan Menken; Lyrics by Howard Ashman and Tim Rice; Book by Linda Woolverton; Choreographed by Denis Jones; Directed by Mark S. Hoebee. Singing teapots and candlesticks, an evil spell, and an unlikely love story are all part of the magic of Disney’s Beauty and the Beast, an international sensation that has played to more than 35 million people in 13 countries. Based on the Academy Award–winning animated feature, the stage production includes all of the original songs from the movie by Alan Menken and Howard Ashman, plus additional gems by Menken and Tim Rice. The whole family will be enchanted by this gorgeous production, featuring stunning costumes and sets, spectacular dance numbers, and, of course, a fairy-tale ending.

Paper Mill Playhouse offers its audience an opportunity to enhance their theater experience with behind-the-scenes views of mainstage productions.  Have you ever wanted to sneak a peek behind the curtain? Or wondered what the director was thinking, or how the cast prepares for a show? Join us for one of many revealing insider’s experiences.

Paper Mill Playhouse offers people with disabilities the opportunity to see live theater with dignity and independence through a myriad of award-winning access programs and services, including audio description and sensory seminars for the blind, Braille and large-print programs, American Sign Language interpretation for the deaf, open-captioning for those with hearing loss, and assistive listening devices. In addition, Paper Mill Playhouse provides Autism-friendly performances of both mainstage and children’s shows throughout the season.

PAPER MILL PLAYHOUSE, a not-for-profit arts organization under the direction of Mark S. Hoebee (Producing Artistic Director) and Todd Schmidt (Managing Director) and recipient of the 2016 Regional Theatre Tony Award, is one of the country's leading regional theaters.  Paper Mill Playhouse programs are made possible, in part, by funds from the New Jersey State Council on the Arts, a partner agency of the National Endowment for the Arts. Paper Mill Playhouse is a member of the National Alliance for Musical Theatre, the Council of Stock Theatres, and the New Jersey Theatre Alliance.