When museums that closed their doors during the pandemic re-open, the Princeton University Art Museum will not be among them. In 2018, the thriving institution announced that Ghanaian-British architect Sir David Adjaye, in collaboration with executive architects Cooper Robertson, would be designing “a bold and welcoming new museum.”

Adjaye is best known for his design of the National Museum of African American History in Washington, D.C. Its opening in 2016 was hailed “cultural event of the year” by The New York Times. The following year, Adjaye was knighted by Queen Elizabeth II and was recognized as one of the 100 most influential people of the year by Time magazine.

To accommodate Princeton University’s growing collection, the original 1890 structure had been added on to over the years. 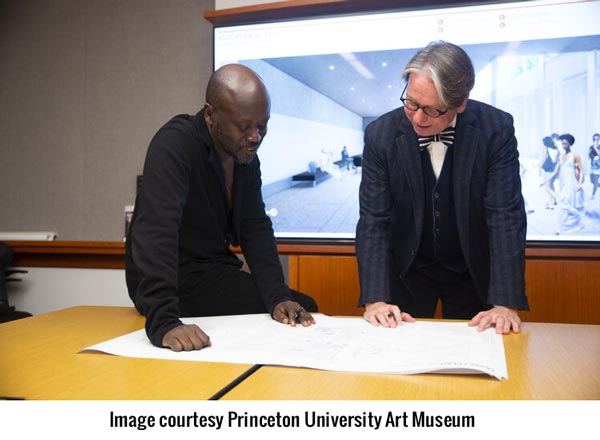 “The museum served us well, but some areas do not cater to our collection or our teaching mission and we want to update the amenities,” said the museum’s Director for Collections and Exhibitions Chris Newth during a recent online program “Moving an Art Museum.”

The new facility, built on the existing footprint, will double the space for exhibitions, conservation, study, and interpretation of the collections, serving as a hub and a gathering place. Made up of seven interlocking pavilions, the new building promises to challenge the hierarchies associated with grouping objects by geography and chronology. Surrounded by art walks, terraces, and performance spaces, it will become an edifice with “all fronts and no backs.”

In its previous home, the museum was only able to showcase 2% of its collection, topping 100,000 objects, at a given time. The new design, expected to open in late 2024, will offer visible storage.

While it was initially anticipated that the museum would have to close its doors for two to three years during construction, the pandemic-related closure added a year to that. The good news is that the museum was able to get a jump-start on the move. 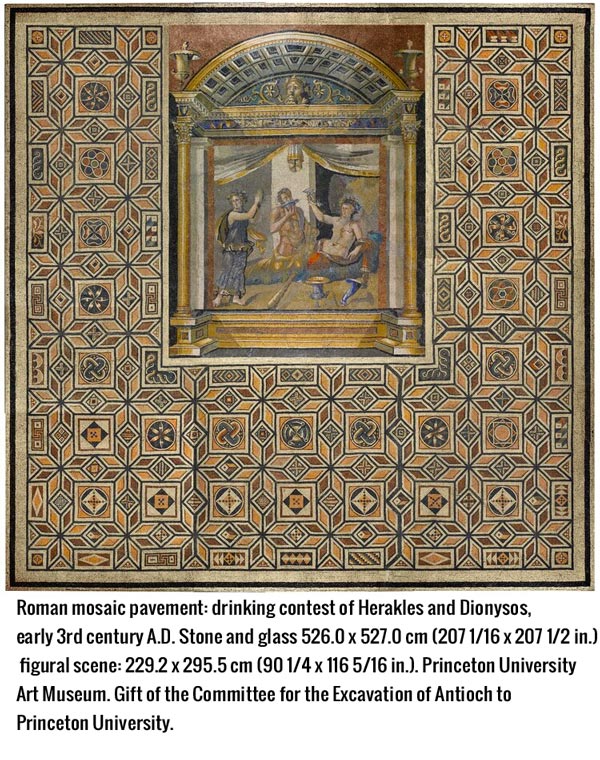 With so many works of art hanging on walls or in display cases, from antiquity to contemporary art, the move has taken immense planning and coordination. The graceful white George Segal circus acrobats that had been suspended in the building’s entryway have been crated and put into storage, as has the brothers Doug and Mike Starn’s “(Any) Body Oddly Propped,” a series of towering stained glass works interacting with nature at the front of the museum.

Other works, such as a Venetian doorway by Pietro Lombardo and the mosaics from Antioch excavated during a 1932 expedition, are embedded into the floors and walls, and were never intended to be moved.

“It was almost like a second archaeological dig to figure out how these were put in,” said Chief Conservator Bart Devolder during the recent online program.

Re-installing presents a “moment to think about what people who come after us might do,” he said. One option might be based on a practice at the Acropolis Museum in Athens, in which mosaics are shown under a glass floor visitors walk can walk over.

It took a village-worth of consultants and conservators to advise on the stabilization, safe removal, crating, and future treatment. The safety of people working in the vicinity remains a priority, and security personnel are an essential part of the team. 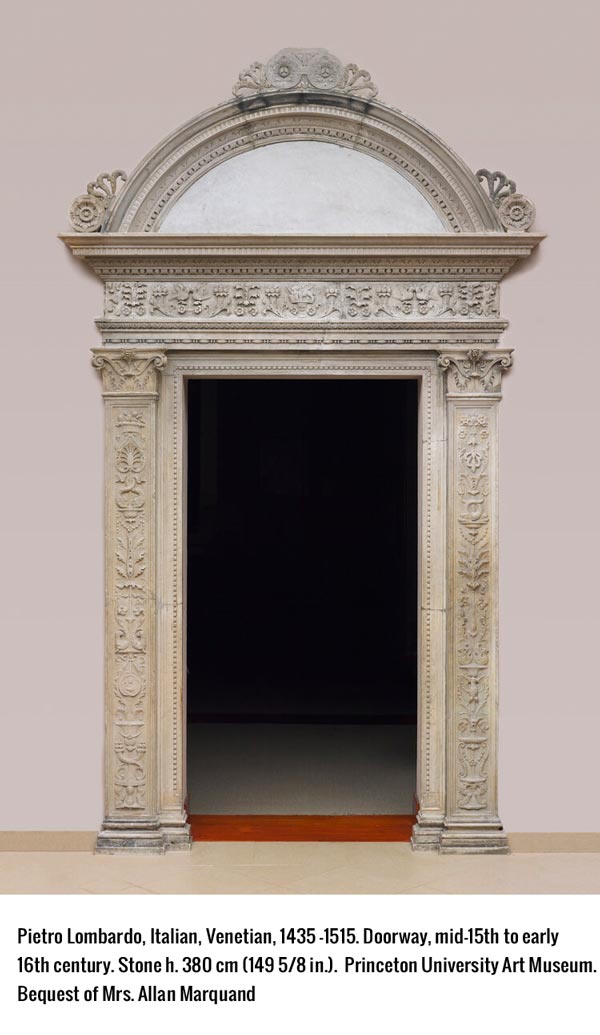 Everything had to be carefully documented, as records are invaluable to the successful re-installation. De-installation also presents an opportunity to make repairs or give specific conservation attention to pieces.

The project is on schedule. “We hope to complete the evacuation by May and hand the building over to the contractors in early June,” says Executive Director James Steward.

The contractors’ first task will be to mitigate asbestos, added in the 1960s, followed by demolition.

For years, Steward has been exploring ways to keep the museum’s presence alive during its closure. When the pandemic hit, the museum, which had already been thinking about how to operate remotely, was able to quickly pivot to virtual programming. “We had a robust series of in-person programs we switched to a virtual format,” he says.

The university will resume in-person classes in fall, and “with presumed in-person programming, we will build on what we learned and do blended programming,” says Steward. “We’re not going to put that genie back in the bottle.”

Virtual programming and online exhibitions have enabled participants from 44 countries to attend. A free weekly art making class, in collaboration with the Arts Council of Princeton, draws 900 participants a week, and the online unveiling of the Adjaye design in September 2020 brought 7,000 participants.

Museum membership has quintupled, thanks to it now being offered for free. “This enabled us to develop more robust ways of contacting people and the ability to communicate with many more households,” says Steward.

Even though programming is free, “we have to continue showing value. People have competition for their time, there’s fatigue with the number of emails in their in box. Like everyone, I’ve been worried about a certain amount of fatigue, but, a year plus into this, we attracted 1,300 participants to a recent conversation with [artist] Glenn Ligon and [New Yorker theatre critic] Hilton Als. That tells me we’re still finding resonance with the programs we’re putting forward. We can’t settle into a new normal, but must keep reinventing. 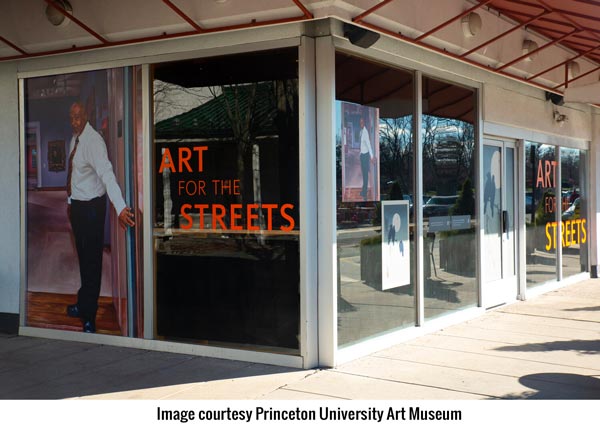 Last year, when businesses in the heart of town began closing spontaneously, the museum partnered with the Princeton Merchants Association and Princeton Shopping Center to create Art for the Streets. Empty storefronts were brought to life with high-quality works from the museum. For example, Mario Moore’s “Center of Creation (Michael),”  a 72-by-60 inch, 2019 portrait of one of the museum’s security officers holding open the doors to an elevator – created while Moore was a Hodder Fellow at Princeton – greets visitors in the windows of a former gourmet market.

Each reproduction is accompanied by a QR code linking to additional information. “It’s a way of contributing visual vivacity and refreshment into in everyday lives,” says Steward.

While it may strike one that the museum without walls becomes a museum that doesn’t need walls, “We believe very strongly that the appetite for authentic experience will be greater than before COVID,” says Steward. 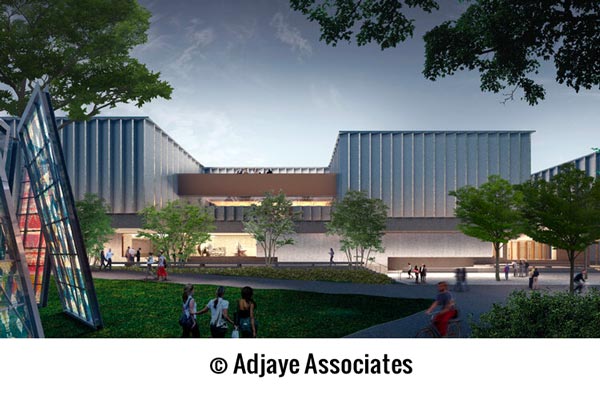 The current crisis has led to a design that includes adaptations to make the facility resilient in the event of future crises. State-of-the-art technologies include multiple circulation patterns in the building so that viewers can move through in a socially distant way. There will be six entryways and exits (the existing building, with only one entry, made it impossible to operate safely during the pandemic). A state-of-the art ventilation system will remove particulate matter at a microscopic level.

In summer, the museum plans to re-open Art@Bainbridge, formerly the headquarters of the Historical Society of Princeton that was converted to gallery space in 2019. The somewhat smallish space is designated for experimentation, creating fresh installations from the collection, and testing ideas on presentation and interpretation.

Plans are in the works for four traveling exhibitions from the collection and will be announced once the ink on the contracts is dry. Additionally, a number of long-term loans are being made to specific museums rather than having the works stored; a stipulation is that the works be on public view. 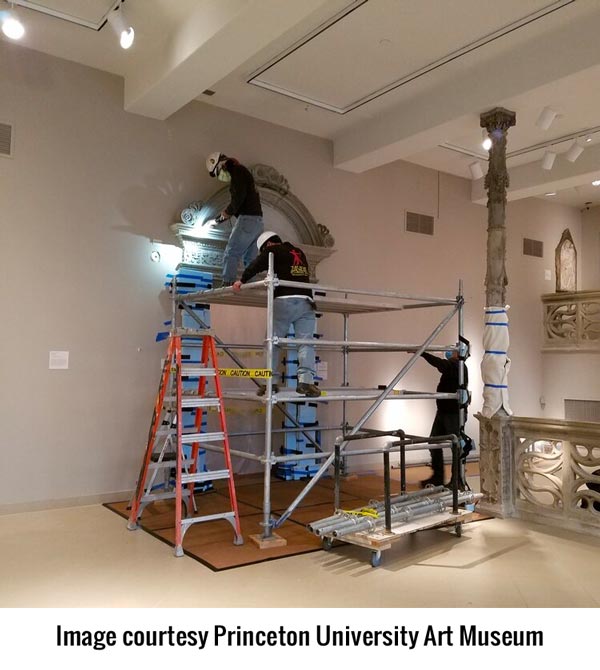 “The biggest issue for us is that we had to bring on a large corpus of additional art handlers and registrars to help us pack up the collections,” says Steward. “These are typically very specialized skill sets. On a typical day for the past six months, some 60 people have been moving objects in the building, including staff, contractors, and consultants.

“Beyond this,” he continues, “unlike so many cultural institutions, we have been able to weather the COVID crisis largely intact. We did have a surplus of security staff, but these were redeployed across the university’s security operation. During the years ahead, we have every expectation of retaining our full staff and will start laying on additional positions as we near reopening and as funds allow in key areas like visitor services, education, and development.”


originally published: 05/01/2021
About the author: Ilene Dube is a writer, artist, curator and filmmaker.
Content provided by Discover Jersey Arts, a project of the ArtPride New Jersey Foundation and New Jersey State Council on the Arts.