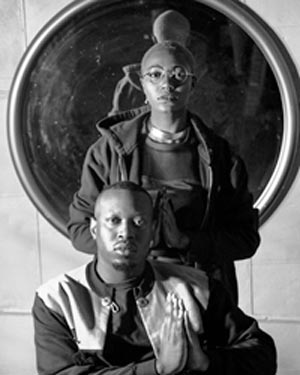 Chelsea and Emann Odufu, a pair of Guyanese / Nigerian / American creatives and art activists born in Newark, NJ and now based in New York City, have created ORI INU: In Search of Self  – an Afro-futuristic coming-of-age story of a young immigrant woman who must choose between conforming her identity and spirituality to the cultural norms of America or revisiting her roots in the Afro-Brazilian religion known as Candomblé. Sharing an unfamiliar cultural narrative, this original entry into this year’s Pan African Film Festival (PAFF) and Hollywood Black Film Festival (HBFF) stars Tony Award-winning actress Tonya Pinkins (All My Children) and features performances by the Grammy nominated group Les Nubians.

Though the film by the brother and sister team revolves around a young woman torn between the practice of Candomblé and Christianity, the story is a universal one of self-enlightenment, told through an unconventional lens. With rich color and Afro-futuristic imagery, ORI INU addresses inter-generational conflicts, religion, and the trauma of finding one’s true self. While portraying the protagonist’s journey, the film engages audiences with a powerful message reflecting how self-examination and knowledge of self can create a brighter future – not just for people of African descent – but for all peoples.

“It is our hope that the film will serve as a tool to connect cultures and have people see the similarities between differing religions and backgrounds, while showing the divinity of Black and Brown people that is far too often underrepresented in modern day media,” said the film’s Director and Co-creator, Chelsea Odufu. “So much of our identity is defined for us by media, and one of the messages here is that you should look within yourself to be free,” said Chelsea.

Emann Odufu, Producer and Co-writer of ORI INU describes the film as being a product of its time. "In an era where society seems to be telling us that black lives don't matter, this film is encouraging youth of the african diaspora to define their own identity for themselves and to go after their individual purpose and truth," said Emann.

The Odufu siblings aim to create media that interrogate the idea of identity and the complexities of what it means to be a Black American or immigrant within the modern context of our society. The 23-year-old Chelsea is recent graduate of NYU's Tisch School of the Arts, and the film began as an idea for her thesis project. Over the past year they have done workshops and speaking engagements at institutions around the country, including Yale, Dartmouth, Vassar, NYU, Columbia, Wesleyan, and the Museum of Contemporary African Diasporan Art to name a few. These speaking engagements revolved around their film “ORI INU” and its ability to spark conversations about the representation of Blacks in the media, Afro-futurism, the stigma of African spirituality and other topics such as female empowerment and the quest to find one’s path in life.