New Brunswick Invests In The Arts 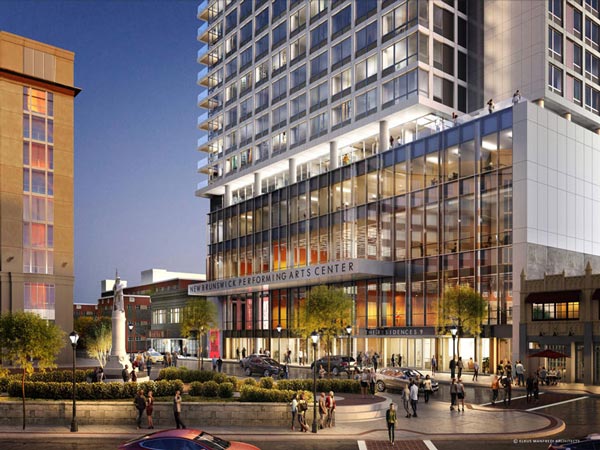 For decades, New Brunswick has been one of the most vibrant arts towns in the state, but the city is just getting started.  Construction has begun on the New Brunswick Performing Arts Center, an exciting project which will help cement the city’s “theatre row” as a premier destination for the arts.

The new arts center will be home to George Street Playhouse, Crossroads Theatre Company, American Repertory Ballet, and Mason Gross School of the Arts.  Additional organizations may locate there in the future as well. The facility will feature two theater spaces, including a 465-seat lyric proscenium theater, designed to accommodate musical theater, dance, opera, and dramatic theater, with an 86-foot stage and an orchestra pit. It will also include a tower for suspended stage scenery and equipment and a trap system below the stage used for scenery effects. The smaller theater will seat 253 people and is designed for theatrical performances, smaller dance performances and lectures, as well as community and musical events.  A new 344-space parking garage on an existing parking lot on Bayard Street, currently owned by the New Brunswick Cultural Center and TD Bank, is also part of the project.

The $60 million project is being run by New Brunswick Development Corporation (Devco). In addition to the theatres, 207 residential units will be created in an 18-story apartment tower.  With the State Theatre (and its 1847 seats) located next door, Livingston Avenue in New Brunswick will be home to great events nearly every night.  Devco sees that as a great marketing angle for the apartments. 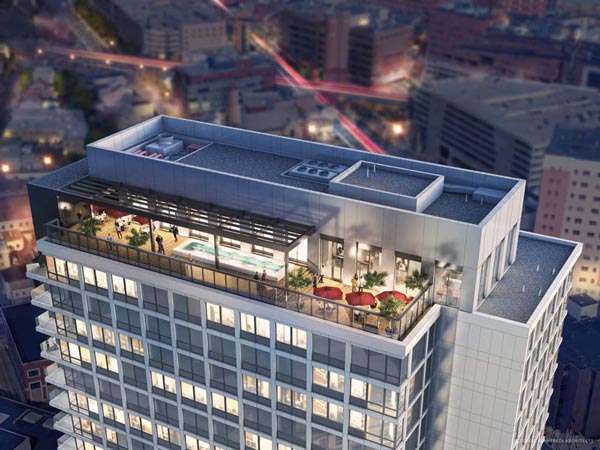 According to Chris Paladino, Devco President, 80% of the apartments will be listed as market rate and 20% are listed as affordable.  The latter will be marketed to the arts community.

“We’re working with the Actors Guild with the goal of marketing the 20% affordable units towards people involved in the arts,” said Paladino.  “Not only actors and musicians, but choreographers, poets, playwrights, visual artists, and people who work behind the scenes.  We’re hoping to be able to rent about 40 of those apartments to people who are actively involved in the arts professionally.”

Paladino says you only have to look as far as New York City to see a public/private partnership like this with the arts; noting projects like Carnegie Tower (which helped generate revenues for the major renovation of Carnegie Center) and apartments built on land owned by the Museum of Modern Art (MOMA) which aided an expansion of its gallery space.

One of the most exciting aspects of the project from an arts organization perspective is the creation of five rehearsal spaces that are the same size as the actual stages for the arts center.

“All of our organizations will not have to use the actual stage for rehearsal time - valuable time - until they do tech and dress rehearsal,” explained Paladino.  “And they’ll be able to rehearse on a stage in a space that replicates where the performances will be.  What used to happen is George Street Playhouse would rehearse on the stage, do their tech, do their dress rehearsal, do their run, break it down, and start all over.  Well, we pick up several weeks in between when they’re not rehearsing in that space and are able to drop in two weeks of the ballet or opera or two weeks of something else.” 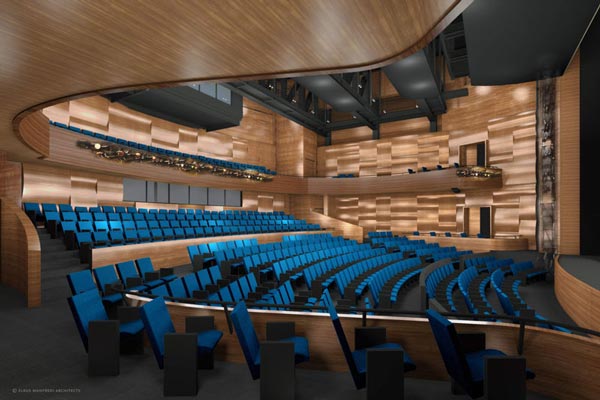 Paladino estimates the setup will allow for about 80 additional performances to take place in the arts center and lead to somewhere between 60,000 and 100,000 additional arts patrons annually.

Another exciting aspect of the project is the inclusion of Rutgers University’s Mason Gross School of the Arts. The arts center will give their students an opportunity to perform in a world-class setting in the downtown area and continues the school’s plan to update its facilities to match those of its Big Ten peers.

“I think a lot of things that happened over the last couple of years have reenergized the university,” said Paladino.  “Rutgers entering the Big Ten - both with its impact on athletics and academics, but also its impact on the City of New Brunswick and the amount of people who come to visit. At the same time, we’ve got a new president in Bob Barchi who was able to consummate the integration of the University of Medicine and Dentistry.  So, there’s a general era of good feeling at the university.  I think this administration has reached into the city wanting to be engaged.  Taking Mason Gross, which has always been a high profile school and making it part of this redevelopment project, was an easy call by the administration.”

Mason Gross has long wanted to launch a musical theater program, but lacked the production space to do so until the arts center opportunity was introduced.  The new program will be launched in the fall 2019 semester with performances in the new arts center.

“We’ve had great demand for musical theater over the years from prospective students, and we’ve regretted telling them we don’t offer it,” said Mason Gross School of the Arts Dean George B. Stauffer. “Several of our peer Big Ten universities, most notably Michigan, Northwestern and Penn State, have thriving programs. It’s time for Rutgers to end this shortcoming and create our own program.”

Rutgers will provide $17 million towards the construction of the arts center.  Other project partners include the City of New Brunswick, Middlesex County, the New Jersey Economic Development Authority, Pennrose Properties, and the New Brunswick Parking Authority.  Together they combine to be one of the biggest public/private partnerships in New Jersey history.

“I’ve been doing this a long time,” said Paladino.  “And I’ve never seen more not-for-profit — Pennrose being our for profit partner — and governmental entities all rowing in the same direction to be able to pull off something that is transformational to the city and hopefully to the arts.  Not only in New Brunswick, but in New Jersey.” 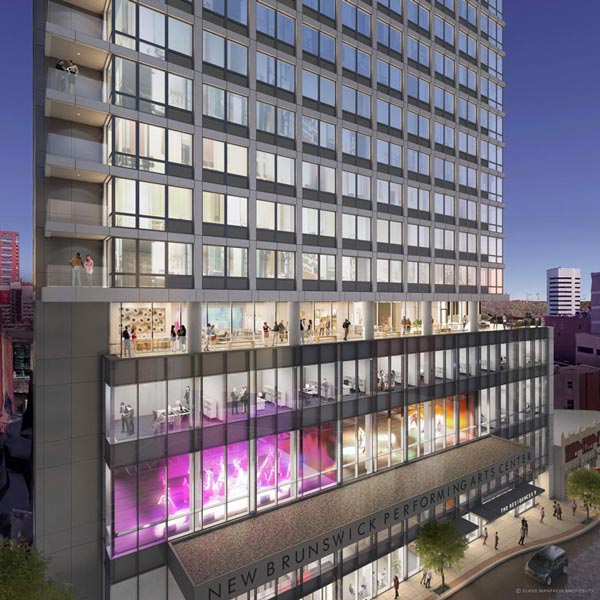 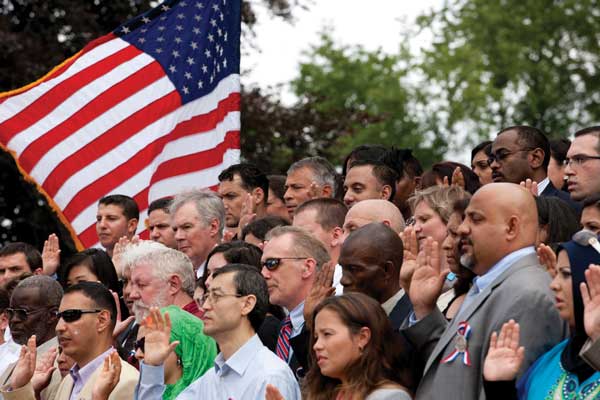 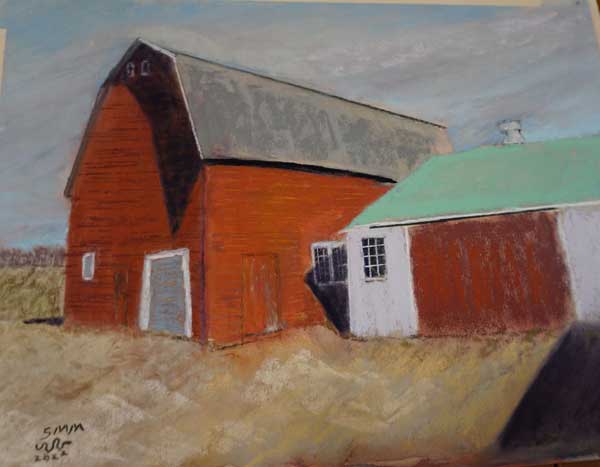