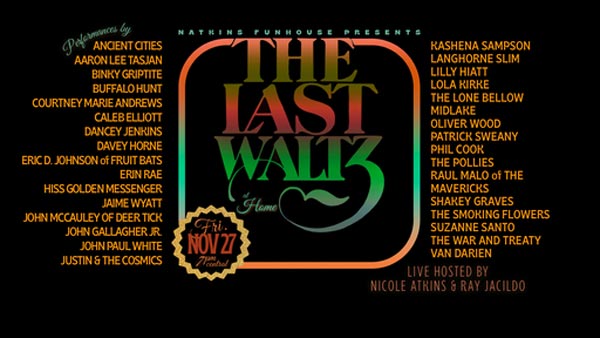 On November 27, 2020 at 8:00pm (EST) Natkins Funhouse Presents: The Last Waltz at Home hosted live by Nicole Atkins with Ray Jacildo. The event will be available as a live stream hosted at seated.com with tickets starting at $10.

"This time of year I look forward to the tradition of performing the complete The Last Waltz at the Capitol Theatre in New York," wrote Nicole Atkins in an email to her fans.  "The lineup is always so diverse and I've met some of my best musical friends from these shows.  Additionally, Thanksgiving is a big deal in my house.  Our table is large.  We play dice after dinner - laughin' and shouting with the music loud and dollars flyin! So, while we're in the midst of this unprecedented worldwide pandemic, a lot of us, myself included, are unable to be with our families this Thanksgiving or continue the tradition of performing The Last Waltz together, The Last Waltz at Home, became our solution."

"Come join us on Friday, November 27th at 7pm CT (8pm EST), for special performances of the entire soundtrack by your favorite artists from their homes.  Ray Jacildo and I will be hosting the event live - talking music, traditions, chatting in the comments with our families and some of the other performers, and more fun surprises," continued Atkins.  "Hopefully, we will never have to do The Last Waltz this way ever again, but while we are, we're gonna make it a night where you can say, now THAT, was f*cking fun!"

Tickets are available for purchase online and people are able to add on a donation to the Band & Crew if they wish.