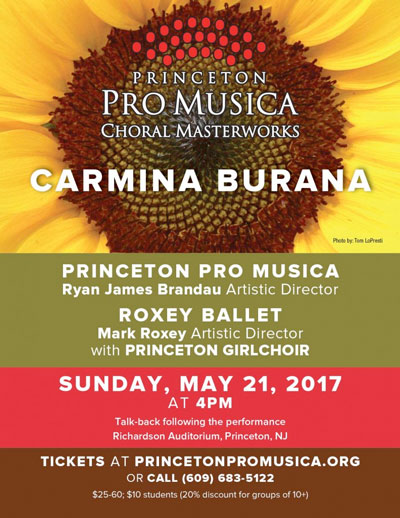 When Carl Orff first conceived “Carmina Burana,” he pictured it as a “scenic cantata” with music and dance working together to create a truly beautiful experience. That combination will be on display at Princeton University’s Richardson Auditorium on May 21st when three Garden State-based arts organizations—Princeton Pro Musica, Princeton Girlchoir and Roxey Ballet—team up for a performance.

“With hundreds of auience members gathered around and above the thrust stage of Richardson Auditorium, the 100 voices of Princeton Pro Musica will—with the full sonic power of seven pairs of hands pounding away at an entire battery of percussion instruments—perform the musical half of Orff’s scenic cantata, ‘Carmina Burana,’” said Princeton Pro Musica Artistic Director Ryan James Brandau. “Nineteen dancers from Mark Roxey’s company will bring the poetry to life with movement and light. The lovely voices of Princeton Girlchoir will be heard from the balcony. It will be a thrilling hour!”

Hilary Butler, Executive Director, Princeton Girlchoir added, “The interesting thing about ‘Carmina Burana’ is that it is structured as a story, although it is not a traditional story where you have a beginning, middle and end. The piece in whole tells a contextual story; adding dance to that helps the audience to interpret and understand what is happening in the broader context.”

Butler notes that “Carmina Burana” uses multiple languages, which can be difficult for audiences to follow from a story standpoint, but the dance performances help tell the story.

“The choreography stretches from the main parts of the sections; they are narratives and they follow subject matter that you find in the poetry, as well as elements of the score,” explained Mark Roxey, Artistic Director of Roxey Ballet. “The ballet was crafted one note at a time in collaboration with Ryan, the conductor of Princeton Pro Musica. There was lots of discussion and collaboration. The audience that comes will not see every section of ‘Carmina Burana.’ It is a two-year project.

“We have choreographed 12 of the 25 sections, so it is roughly half. It brings the audience to Carl Orff’s music in a way that is very visual, but it also allows for some reflection and time for the audience to listen to other sections.

“The costumes are by Alicia Worden and Nilda Roxey Jones and have as much to do with the concepts in the choreography, in that they tell their own stories that are thought provoking. The styling is very much my style of work.

“When you see Roxey Ballet, you see a style of ballet. It’s one of those elements that’s hard to convey – it’s total theater, it encompasses a lot of elements of both classical and contemporary ballet theater.”

Princeton Girlchoir members will provide the treble choir, singing during certain movements of the piece. The company has worked with Princeton Pro Musica a number of times in the past, most recently in Mendelssohn’s oratorio, “Elijah.”

“I’m always delighted to work with young singers of such a high caliber,” said Brandau. “We’re lucky to have them in town!”

According to Mary Trigg, Executive Director of Princeton Pro Musica, she knew about Roxey Ballet from a friend and neighbor who works for them. After looking at Roxey’s website and watching a few videos of their work, she thought they would be able to provide something new for “Carmina Burana,” a piece the company has performed five times in its 38 year history.

“I thought Mark had an interesting style that would lend itself to “Carmina,” so we invited them to have a conversation about it,” recalled Trigg. “Mark very enthusiastically accepted the commission and it just took off from there.

“Working with Mark and the company has been a joy. Mark’s enthusiasm is contagious and his deep appreciation of the music of Carl Orff will add an element of rhythmic intensity that is hard to feel without the movement of the dancers.”

Working with a dance company like Roxey Ballet was important, but having original choreography and costumes designed for the piece makes this production even more special, essentially bringing Orff’s original vision to life.

“In Orff’s musical idiom, music and movement coexist,” added Brandau. “At the school he created with Dorthee Geunther, the dancers were encouraged to improvise their own music for movement, and instrumentalists were expected to create movement to pair with their music.

“Orff’s score is dominated by infectious rhythmic patterns, which he enhances with a barrage of accents and the clear timbres percussion. The effect, for me, is that the music and dance coincide so well that they amplify each other’s impact. The total artwork is greater than the sum of its parts.”

All three organizations believe in the power of collaboration. Roxey Ballet has worked with many New Jersey-based songwriters and singers—the Riverside Symphonia, Concordia Chamber Players and the New Jersey Philharmonic, to name a few.

“We’ve worked with a number of organizations and we always welcome musical organizations,” said Roxey. “There is nothing more fulfilling than the collaborative elements of dance and music experienced together.”

For Brandau, the collaboration goes beyond simply introducing audiences to one another; it helped define the work in many ways.

“As the artistic director of a choral and orchestral group, it’s extremely enriching to interact with an artistic director and artists from another discipline, especially one that uses music, to witness how they build their creations, how they rehearse them, what their artistic priorities are,” said Brandau. “Attending rehearsal absolutely impacted the way I rehearsed the singers of Princeton Pro Musica.”

Trigg believes that budget cuts and uncertainty within the future of arts funding makes collaborations more important now than ever before.

“In the current climate, there is something beautiful about different arts organizations coming together to support one another and to create art that is bigger than any one organization,” she explained.

The three organizations have joined together to make an experience that will stimulate all of the senses in a piece that celebrates life, fate, love and spring. The trio’s “Carmina Burana” is a wonderful look at an enduring classic and an exciting example of what can be done via a collaborative effort.

Princeton Pro Musica, Princeton Girlchoir and Roxey Ballet will perform “Carmina Buran” on Sunday, May 21, 2017 at Richardson Auditorium in Princeton, NJ. The concert will be held at 4 p.m. with a post-show talk-back with conductor Ryan James Brandau and choreographer Mark Roxey at 5:15 p.m.