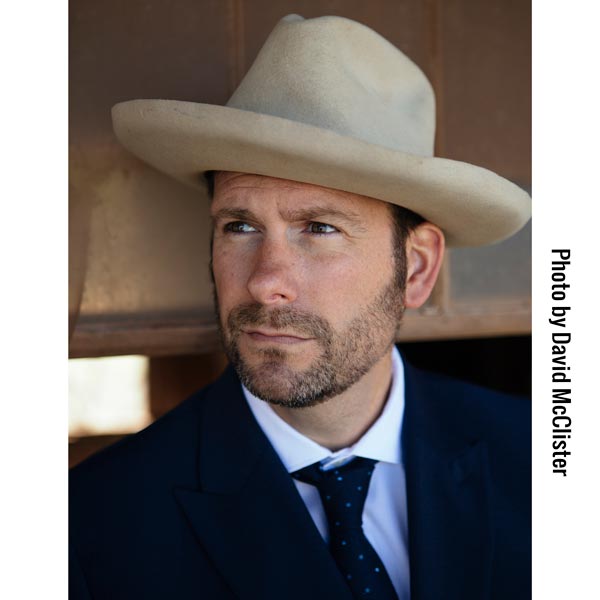 (HAMILTON, NJ) -- Moot Davis hails from the land of Sinatra and Springsteen, a launching pad for some of the greatest careers in music history. Born just blocks away from Trenton State Prison to parents of West Virginian heritage, Davis started out as a stage actor traveling around the U.S. and Europe. He's got a "homecoming" show of sorts on Friday, September 3 when he performs at Bill's Olde Tavern in Hamilton.  Seven Cities of Gold, his next album, will be released on October 22.

Moot began writing songs to pass the time at rehearsal, wound up with what would become his first album, and subsequently saw his songs featured in films such as Academy Award-winning Crash and horror hit The Hills Have Eyes. These early successes built a rapport with television and film music supervisors, earning him 24 placements to date.

Rockabilly maven Rosie Flores was instrumental in Moot making the move to Nashville. They crossed paths when Flores was touring through the northeast, performing on WDVR's Heartlands Hayride radio show alongside Moot. "You should move to Nashville, I think you'll do well!", Rosie said. Within weeks, Moot was headed to Music City to see what he could make happen.

Paying dues and learning the trade in the honky-tonks of Nashville's lower Broadway, Davis started out at the legendary Tootsie’s Orchid Lounge. Flores was, once again, instrumental in Davis securing his first record deal. She caught part of his set at Tootsie’s and afterward invited him to go on tour as her opening act. While on the road, Davis shared some rough mixes of the new album he was working on. Flores liked what she heard, and offered to send the tunes to Pete Anderson (Dwight Yoakam's renowned producer and guitarist), believing that Anderson would be interested in bringing the as-yet unfinished album to life.

Exactly one year to the day of moving to Nashville, Davis was on a plane to Hollywood, CA. Armed with dozens of original songs, he headed into the studio to record for Pete Anderson's Little Dog Records, and then hit the road. Anderson produced 2004's debut album Moot Davis, and 2007's Already Moved On.

Davis later stepped out to start his own label, and released the Kenny Vaughn-produced Man About Town in 2012, followed by 2014's Goin' In Hot. Hierarchy Of Crows arrived in 2017, co-produced with longtime drummer Blake Oswald and engineer Jody Sappington, who reunited for the current album release, Seven Cities of Gold.

Seven Cities of Gold is an eclectic perfect storm: part fantasy, part reality, steeped in the present but with a reverent nod to the past. The album kicks off with “Hey Hey,” a flirty, toe-tappin’ number showcasing Davis’s spirited, confident vocals. Blazing riffs courtesy of guitarist Bill Corvino along with Skip Edwards’s perfectly placed B3 organ pave the way to country-rock’s exploration.

Electric 12-string adds a unique stamp to the Willie Nelson classic “Crazy;” and the band evokes a modern day “Suspicious Minds” on “California,” where pedal steel player Gary Morse, along with Corvino and Dean Person, put on quite a guitar seminar — best enjoyed loud! The album’s title track, a sludgy, psychedelic-tinged rocker, is like T. Rex tripping acid with Guns ‘n’ Roses...a fantasy of conquest, murder, jungles, and untold riches.

Moot Davis’ musical style has one foot in the past, the other in the present. A self-described outsider, the perspective is evident on the introspective “Turn in the Wind and Burn.” “...I killed everything I love just to get here and wait my turn...” If Seven Cities of Gold is any indication, Moot is certain to continue his climb.