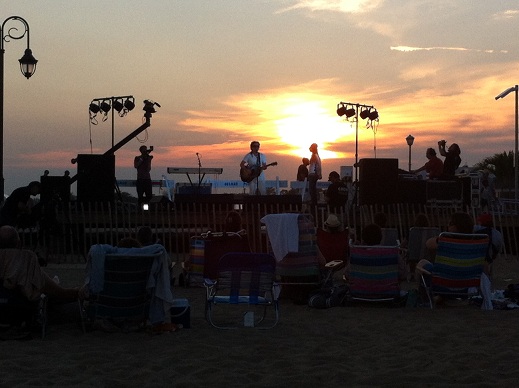 (BELMAR, NJ -- JULY 18, 2013) -- A new era for 90.5 The Night's summer Songwriter series began on Thursday, July 18th when Michael McDermott and Jerzy Jung became the first artists to take part in the weekly showcase in 2013. Held for years in Red Bank, the show was moved to Belmar this year and was supposed to make its debut on July 11th, but the initial concert featuring Richard Barone and The Sunday Blues had to be cancelled due to inclement weather. I've waited a long time to have shows like this take place in Belmar, shows like those that the town used to hold at the Taylor Pavilion decades ago. If all of the shows go as well as this one, the wait was definitely worth it.

The sound was fantastic -- much better than any of the shows I attended in Red Bank. In fact, the sound crew did the impossible, they turned the beach setting into a true listening room. It was actually one of the best sounding shows I've heard in a while and the best outdoor show for sure. While the opening set by Jerzy Jung and the first two songs by McDermott had the audience staring into a blinding sun, once the sun set it was simply stunning. With the sun setting behind McDermott, the view reminded me of something like the classic U2 at Red Rocks video. Add in the comforts of seeing a show on the beach with your feet in the sand and the ocean breezes behind you and the choice to move becomes a winner. It's just a shame that Belmar makes the shows end by 9:30pm because the setting would be perfect if the music could start a few minutes later, when the sun was in a better location for the audience.

One of my favorite things about the Songwriter series (now called Songwriters on the Beach) is the way 90.5 truly bonds with the local music community by offering the opening spot to a local artist each show. And it's great to see artists like Jerzy Jung (accompanied by Michael Askin on guitar) take advantage of the situation. They sounded great. Jerzy (perhaps the best name for a local artist ever) is a true rising star in the area. A keyboardist with an amazing voice that ranges from soft to sultry, she closed with "Black Dress, White Dress" - a song that came it at #55 of the Top 100 Songs of the Last Decade by New Jersey Artists in my book, Are You Listening? out of several thousands songs. That's how talented she is.

As for McDermott... I've been a fan for a very long time. I first saw him open for The Alarm at the old Ritz in New York City early in his recording career and have followed him ever since. In my opinion, he's one of the most underrated songwriters in the business. In addition to putting out great solo albums, he's got a new band called The Westies that will be releasing their first record later this year. Songs by McDermott and the Westies have regularly been in rotation on The Penguin (www.thepenguinrocks.com) online radio station. During his set, McDermott played a mixture of recent solo songs and tunes from the upcoming Westies release, while tossing in a couple of stories as well. 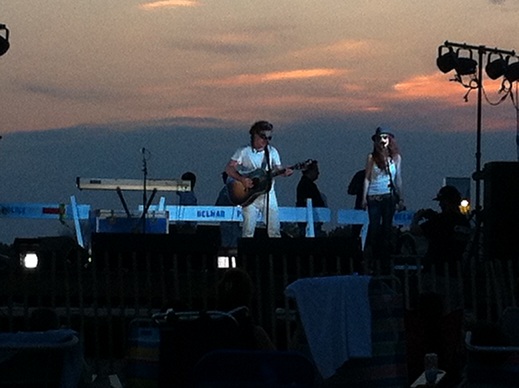 One story was from his early days -- "the salad days" as he called it. His band was playing a show in the middle of nowhere and it was one of those nights in which people kept leaving after each song. The band certainly noticed it, but kept playing on largely inspired by one person in the back who was clapping enthusiastically after each song. At the end of the night, Michael decided to "do the walk" and introduce himself to the guy. Michael thanked him for coming out and for listening. He said, "Michael, I'm the janitor. I needed to wait to turn the lights off for the night."

Humbling moments like that, along with the loss of his record label during the turmoil in the business in the early 90s, helped McDermott become the artist he is today. Equally as important, in recent years, was the death of his mother, which he mentioned during the show. He played several songs inspired by his mother's death and spoke about the way he's still struggling with his grief.

Performing solo and with his wife, Heather Lynn Horton, who added vocals and inspired violin accompaniment, highlights included a wonderful cover of U2's "One" plus originals like "Unemployed", "Where the River Meets the Sea", "Hell's Kitchen", "Still Ain't Over you Yet", "A Wall I Must Climb", and the encore "The American In Me".

It's a shame that an artist like McDermott isn't a household name. He certainly deserves to be.

Here's a look inside his lyrics:

"People always ask me what it is that I do
And very rarely do I ever tell them the truth
I'm a consultant, a pilot, a third or a cook
Or I'm just about to publish my very first book

Still ain't over you yet
A wall I must climb
"I've seen some heroes in my day
I've seen the failures in yours
I've tried to connect us in some way
But we.'re on two different shores
Though your live us worth millions of treasures
But I can't even spare a dime
Live us a wall I must climb"

You can catch Michael one more time in the area when he comes to The Tin Angel in Philadelphia on Thursday, August 1. For more information on McDermott, visit http://www.michael-mcdermott.com

Upcoming shows in the Songwriters on the Beach series include:

Shows take place on the beach around 5th Avenue.