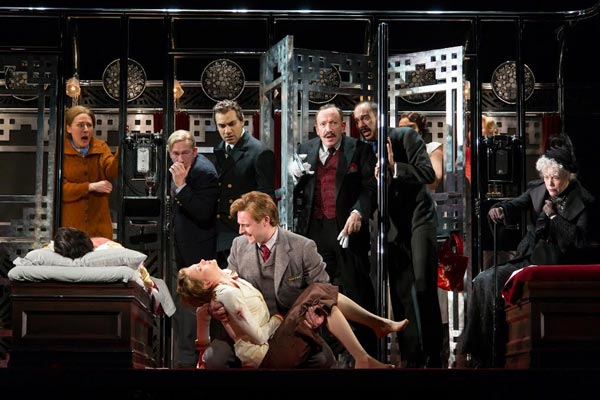 (PRINCETON, NJ) -- The wonderful world premiere stage adaptation of Agatha Christie’s Murder on the Orient Express presented by McCarter Theatre Center will move on to Hartford Stage as part of the company's 2017-2018 season. Helmed by two-time Tony Award nominee Emily Mann and adapted by two-time Tony Award nominee Ken Ludwig, the play will run at Hartford Stage in Spring 2018.

McCarter Theatre Center Managing Director Timothy J. Shields says: "After a record-breaking stage debut in Princeton, McCarter Theatre Center couldn’t be more excited to have Murder on the Orient Express at Hartford Stage as the play’s next step in its journey.  Hartford Stage is an ideal partner to continue the process of bringing the enduring legacy of Agatha Christie’s fabulous characters to life for today’s audiences.”

The exotic Orient Express is about to go off the rails. With a locomotive full of suspects and an alibi for each one, it’s the perfect mystery for detective Hercule Poirot.  Adapted from Agatha Christie’s masterpiece, this suspenseful ride aboard the legendary Orient Express has thrilled mystery lovers from the page, the screen, and over the airwaves since its publication in 1934.

"Agatha Christie’s  mysteries were favorites of mine growing up, and I’m delighted to bring Ken Ludwig and Emily Mann’s beautiful production of her classic Murder on the Orient Express here to Hartford Stage," said Hartford Stage Artistic Director Darko Tresnjak.

The creative team for Murder on the Orient Express features a quartet of Tony Award-winning designers: sets by Beowulf Boritt (Act One, On the Town, Sunday in the Park with George); costumes by William Ivey Long (15 Tony noms.; 6 wins); lighting by Ken Billington (Chicago); sound by Darron L. West (Peter and the Starcatcher).

James Prichard, Chairman of Agatha Christie Ltd and great-grandson of Agatha Christie, added: “Working with Ken Ludwig, Emily Mann, and the wonderfully creative company at the McCarter on the world premiere of this staging has been a hugely satisfying experience for the team at Agatha Christie Ltd., and we are delighted that Darko Tresnjak and Hartford Stage will be joining us as we move forward to take one of my great-grandmother’s most loved stories to theatre audiences across America.”

McCarter Theatre Center’s production of Agatha Christie’s Murder on the Orient Express runs through April 2, 2017. Visit www.mccarter.org for tickets and information.  For more information on the subsequent production at Hartford, visit www.hartfordstage.org.