When you think of horror films, chances are you imagine teenagers in peril. That's the classic formula but not what you'll find in Manhunt. In the upcoming horror flick from Jay Lee (Zombie Strippers!), we see what happens when a couple of guys who know how to take care of themselves wind up in a worst case scenario while on vacation with their lifelong pals. We're talking the ultimate wrestler versus psycho killer mountain man smack down!

Here's how the story is described on the film's website: For three years Buck Severs, World Wrestling Champion, has been M.I.A. After a family tragedy and a major injury in the ring, Buck decides to return to "Bro's Weekend" with his three best friends and try to put some perspective on his life. But Buck learns a little too late that the weekend will take place on a wildlife preserve, closed for 40 years, a vast, densely forested no-man's land of no laws, no rangers, and no rules. He will also find out a little too late that on the preserve lives a wild man, a feral and inbred killer whose one pleasure is to hunt the humans that dare to trespass onto his domain. It will be up to Buck to find the fighter within himself if he is to survive the weekend.

Ed McKeever, one of the producers of the film reached out to New Jersey Stage and said they were trying to get to the next level and do something different by shooting a kind of badass horror movie with bikers, deranged mountain men, great fight scenes, and a good story line. We said, "You had me at badass."

"It's fine to have the teenager in peril and the young girl, but we want to see some guys out there that can kick ass," said McKeever. "And it's known from the beginning that they can kick ass. That's the difference with this film, you know these guys can handle themselves. It means the killer has to become that much more scary because he's not going after teenage kids. The real incubus is what would happen if a bunch of guys who could handle themselves wind up fighting Jason Voorhees or Michael Myers."

McKeever is a Jersey guy who has produced several low budget horror films, including some shot in the Pine Barrens and Atlantic City areas. His role as producer involves connecting people and finding all of the different pieces of the puzzle. One of the biggest pieces is finding investors and finding the people that can help facilitate making the project "sexy" for investors. This means bringing on good actors, directors, the works. In this case, he's already got a director with a well known name in the business. Jay Lee's first feature, Noon Blue Apples, was an official selection of the 2002 Sundance Film Festival and his next release, The Slaughter, won a dozen awards on the festival circuit and was picked up by Lionsgate for distribution. His career continued to rise with the release of Zombie Strippers!

"We're going for broke with this," said McKeever. "We're not getting any younger. We're not that old, but we don't have that newness appeal anymore. We're all kind of established in our work life and the movies have always taken a back seat while we worked out our professional careers. Now it's time to go for the jugular. We want this movie to be over the top, fights, blowing up cars, destroying cabins - we want to make a movie that stands out! Jason Lee's name being associated with it will really help us with the distribution of the movie. We're hoping this is our foray into a bigger type of film, to catapult us to the next level, which would be shooting million dollar features."

McKeever draws on the classic horror films he saw as a kid for inspiration. Three films instantly pop out for him, The Exorcist, The Shining, and Jaws. "The Exorcist is a great film because of the way it was shot, it's just scary. The Shining was another beautifully shot film. And, to me, Jaws is the ultimate horror picture. It's got everything - comedy, drama, and what you absolutely need, an unbelievable protagonist!" 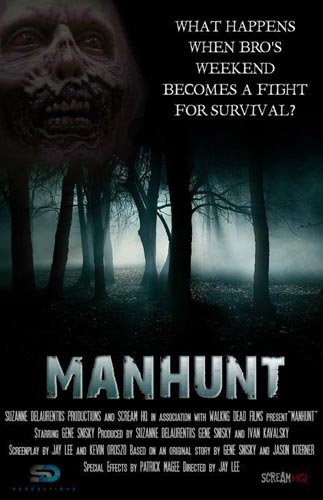