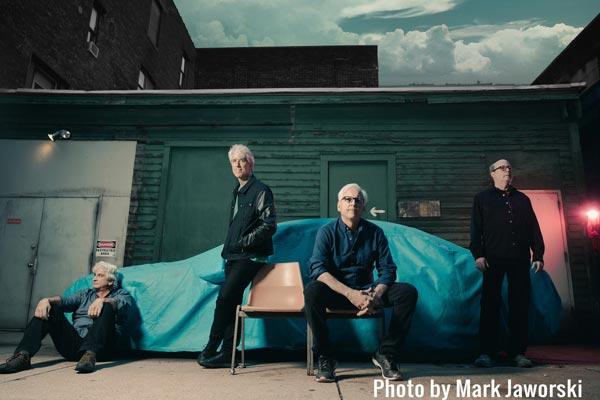 Jersey City-based Rhyme & Reason Records has been makin some serious waves with four releases it either recently dropped or is about to. A self-titled effort by Glenn Morrow’s Cry for Help that marks the Bar/None label head’s first outing in decades is due on June 23. New Orleans’ bilingual Sweet Crude are touring behind their “Creatures” full-length debut with fellow Crescent City export Tank & the Bangas, including a stop on July 18 at Roxy & Dukes in Dunellen. Meanwhile, label mates Pronoun will rock JC’s Monty Hall on June 25 with songs from her label debut EP, “There’s No One New Around You,” and Mr. Flannery and His Feelings, featuring One Track Mike one-hit wonder king Michael Flannery, will drop “Try Your Hardest” on July 14.

The leader of two influential Hoboken bands, The Individuals and Rage to Live, Morrow also has given the world Bar/None releases by They Might Be Giants, Yo La Tengo, Luka Bloom, Freedy Johnston, The Feelies and dozens more. The label is where Rhyme & Reason founder Emmy Black got her start and still shares an office. But rather than release “Cry for Help” on Bar/None, Morrow opted to rely on his young protégé. That was a smart move because the subsequent focus makes for a strong, entertaining, insightful album that will leave listeners wondering why he stayed away from releasing his own songs for so long. 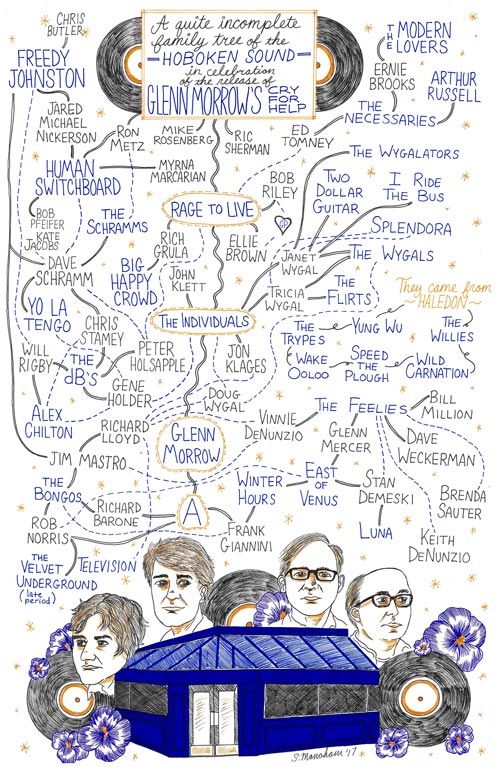 Morrow’s first LP since Rage to Live’s “Blame the Victims” in 1990, “Cry for Help” channels longtime influence Lou Reed, along with an edgier approach to the tongue-in-cheek, clever wordplay of Randy Newman. Many of the 11 songs explore the past lyrically, as well as musically, yet look forward to a hopeful future despite the name of the band and their self-titled record. Lines like, “Rock ’Em Sock ’Em Robots doing the old soft shoe,” on “Let the Kid Come Out” and “It’s time for our final scene/Let the sparks fly/Let the critics cry/We’ll make ’em feel it in the mezzanine” on “The Third Act” are gold that hopefully can be mined again sooner than later. The same is true on “Keira Knightley”: “Hooked on oxycodone and disability/I wish somebody had an office job for me/From sea to shining sea, everybody must be free/Well surely the sun must shine on some of us some of the time.”

I also love the flood-lamenting single, “Comfort Zone,” especially when Morrow sings, “He lost his record library/Everything from V to Z/That means XTC, Yo La Tengo, and the Velvet Underground.” He also waxes musically nostalgic on the opening “Bleeker and Third” about a Greenwich Village songwriter who offers much promise, like the surrounding music scene. But the former turns away, while the latter weakens from gentrification.

From there, Morrow brightly looks forward with “The Days to Come,” “when all the happy hours turn into happy days,” and juxtapositions between a bar-hopping, carefree youth, the hopefulness of settling into maturity with and without old friends, and relying on the next generation to fix a fragile, messy world.

The collection’s surprisingly organic sound is heightened by exceptional organ and piano contributions from Andy Burton, especially the chill Hammond on “Comfort Zone.” Ably joining Morrow throughout are guitarist Ric Sherman, bassist Mike Rosenberg and drummer Ron Metz, who rock to a stunning close on the garage-fueled “Return of the Wild One.”

The frequently French-singing Sweet Crude are an indigenous South Louisiana potpourri of exquisite-sounding vocals, layered percussion and a sea of keys that the New Orleans-based sextet call drum pop Louisianais. While some might scoff at the French, if you think of it as an unusual instrument, it really is quite beautiful, like most of the rest of the record. Fans of the similarly rhythmic, vocally rich but much larger Polyphonic Spree will enjoy “Creatures,” but with an emphasis on French rather than African ancestry.

The opening “Weather the Waves” sounds like The Talking Heads at a Mardi Gras party with a mix of tribal rhythms and quirky synths. The standout “Isle Dans La Mer” follows with a light operatic vocal turn by Alexis Marceaux, one off Sweet Crude’s many vocalists, as well as percussionists. The band also features four male singers and the blend of their voices with doubling of Marceaux’s is the greatest of the album’s many strengths. Those strengths include a South Louisiana identity. Yet, while you might expect the violin playing of Sam Craft to have a Cajun flavor on “Isle Dans La Mer,” he instead offers a chamber-like pluck.

Brother Jack Craft shines on the keyboards of “La Cheminee,” pure sucre from a songwriting standpoint with a dual lead vocal by Sam Craft in French, while Marceaux responds in English. “Mon Espirit” is up next with a meditative intro and mourning vocal that turns into a beautiful Paramour-sounding power ballad sung entirely in French by Marceaux. For those who speak the language of music, there’s a scorching organ solo to enjoy.

On “Ancient Maps,” Sweet Crude make their second reference to the creatures who inspired the album’s title. The opening “Weather in the Waves” does too. “Maps” boasts what may be the album’s strongest English lyric: “Summon the wind/Dance the rain/Woke up in the sugar cane.” I also like the lines in “One in the Hand,”: “No need to be so upset/This is as good as it gets … It’s going to be a long weekend/It’s getting cold in the boat sinkin.’” That track also contains one of the album’s most enjoyable moments: a delicious doo-dah-dee-dum backing vocal throughout by Marceaux and some of the guys.

The exotic Roxy Music-like “Finger Guns,” another great vocal turn by Marceaux on “Power Lines,” the fun alliteration of “Laissez Les Lazy,” and another call-and-response on “Laces” bring the 11-song collection to a close with “On Est Pare.” The closer’s compelling rhythms and male-female vocal interplay invite The B-52s to that aforementioned Mardi Gras party.

Now I get the Sweet because of a strong indie-pop sensibility, I’m not sure about the Crude. Perhaps it’s a reference to the spilled oil that has devastated the Louisiana Gulf Coast. I do know that the theatrical stage and unusual décor of Roxy & Dukes is going to be the perfect setting for this dichotomously intense, light-hearted band on July 18. Their tour with Tank & the Bangas also features shows July 11 at World Café Live Downstairs, Philadelphia; July 13, Summer Concerts on the Square, Storrs, Conn.; July 15 at the Celebrate Brooklyn! Performing Arts Festival; July 16, The Ballroom at Outer Space, Hamden, Conn., and then sold-out performances at Boston’s Museum of Fine Arts, Brooklyn Bowl, and Washington D.C.’s Songbyrd.

Label mate Pronoun, whose mom knows her as Alyse Vellturo, has been working hard promoting her four-song EP, “There’s No One New Around You.” In addition to the June 25 date at Monty Hall, the Brooklyn-based indie artist’s tour will bring her on June 26 to Great Scott in her home of Boston, as well as June 28, Kung Fu Necktie, Philadelphia; June 29, Songbyrd, Washington, D.C. July dates include Toronto and the Midwest, then Aug. 1 at Baby’s All Right in Brooklyn.

Pronoun also will perform on the Emerging Artist Stage at the Billboard Hot 100 Festival on Aug. 19 and 20 in Jones Beach, N.Y., with Major Lazer, Zedd, Capital Cities, Blackbear, POWERS and more. Earlier this year, Billboard.com premiered the rework EP, “Use Passport to |Choose a New Location.” Through conversations with more than 60 artists featured on Vellturo's Discover Weekly, she narrowed it down to Funeral Advantage, Future Generations, YEYEY and Charles Fauna. Each produced her songs as if they were their own.

Pronoun also has been featured in Stereogum, Nylon, USA Today, All Things Go, and Andrew McMahon’s “Current Tunes I'm Into” playlist. As one of NPR’s Austin 100, she also was included in a playlist that highlighted Nation Public Radio’s top picks and artists to see at South by Southwest 2017.

About her EP, Vellturo says, “It's a heartbroken girl in her shitty apartment in Brooklyn.”

A music video for “Just Cuz You Can’t” recently was directed by Sabyn Mayfield (Julien Baker).

Also happening on RARR are Mr. Flannery and His Feelings, whose label debut, “Try Your Hardest,” will be celebrated July 13 at Piano’s, New York City, with Kid in the Attic, Tris McCall and more.

Just the other day, a veteran New Brunswick scenester was asking me whatever happened to Flannery, the guitarist, producer, and songwriter for Little T & One-Track Mike. At the turn of the millennium, the Hub City-based alternative hip-hop act collaborated with Slick Rick, toured with OutKast, and landed on MTV with the hit “Shaniqua,” but then seemed to vanish from the musical landscape.

Apparently, that wasn’t true. As half of the Flannery Brothers, Mike has released three albums of award-winning and critically acclaimed children's music. He also has scored independent films, lent his six-string skills to a panoply of New York and New Jersey groups, and produced albums for a growing series of fearless, idiosyncratic acts.

Bob Makin is the reporter at www.MyCentralJersey.com/enterrtainment and a former managing editor of and still a contributor to The Aquarian Weekly, which launched this column in 1988. Contact  him at makinwaves64@yahoo.com. 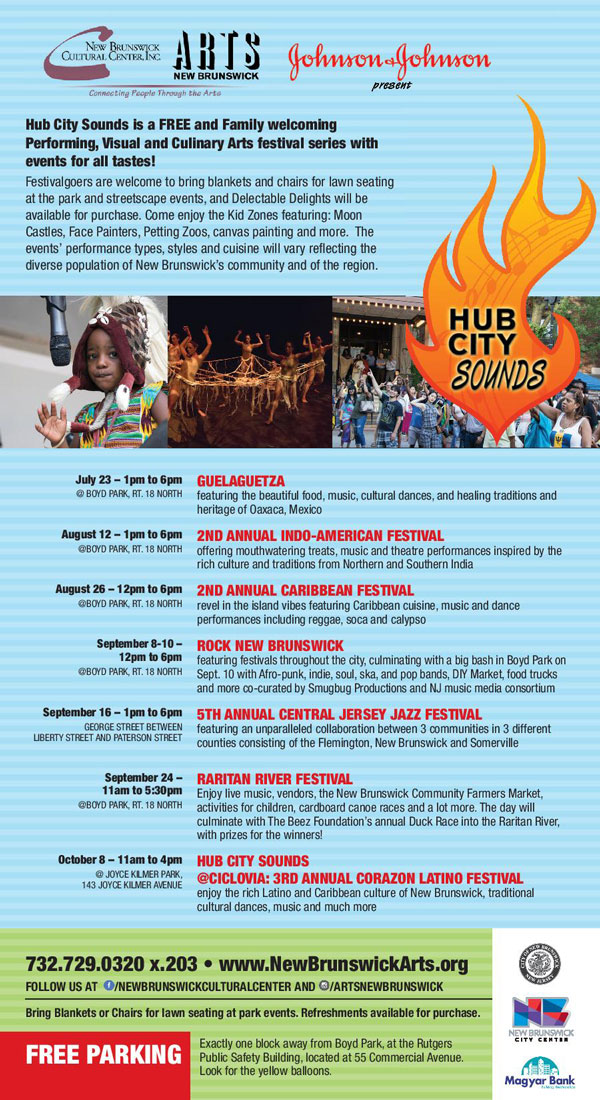