Well-traveled troubadour Pat Guadagno has been a fixture on the Jersey Shore music scene for many glistening moons. For nearly as long, the saloon slinger has been paying annual birthday tribute to Nobel Prize-winning rock bard Bob Dylan with annual festival at the Count Basie Theatre.

BobFest returns to Red Bank for two likely sold-out shows on May 23 in celebration of the fabled singer-songwriter’s 80th birthday. After a year’s hiatus because of the damn pandemic, the long-awaited 2021 rendition in the socially distanced 150-seat Vogel Theatre will feature regulars, such as Rich Oddo, Phil “Red River” Rizzo, Yuri Turchin, Joe Bellia, and Mary McCrink at both shows, plus special guests Rob Paparozzi, Tommy Labella, Byron Crawford Smith, and Jack Pyrah.

When not busy producing BobFest, Pat has been readying two studio albums that would bring his catalog to seven LPs. I chatted with the singer-songwriter about his many accomplishments, as well as his future plans, in the following interview, which I hope you enjoy!

When and how was the first time you heard Bob Dylan, and what was your initial reaction?
Brother Mike was a folkie, and I listened from outside his room to everything he played. He played a lot of Dylan. I decide to quit piano lessons and learn the acoustic guitar.

How many years have you been paying birthday tribute to Dylan and why?

It started as a lark one Monday Night at the Downtown Café (in Red Bank). I played a couple Bob songs to start the night. Tom Moog, the bartender, told me it was Bob’s birthday. ‘Got Any More?’ And I emptied the tank. Someone in the sparse crowd said, ‘It’s BobFest,’ and here we are.

Over the next couple of years on the Monday before Bob’s birthday, I invited Red (River) and Rich (Oddo) and had a few audience members come up. I remember Mary (McCrink), Dick Thomas, Buck Dharma (Blue Oyster Cult) Keb’ Mo’, Ace Freely (Kiss), all jumped in at one time or another. When it got too big, we moved to the Two River Theater.

How were you able to make the tribute grow over the years?
I just did the work, made the show as good and interesting as I could and hired the best musicians I could find. Bob is an easy sell.

Who is playing BobFest this year?
This year we are doing two shows: a 3 p.m. matinee and 7 p.m. Regulars Rich Oddo, Red River, Yuri Turchin, Joe Bellia, and Mary McCrink will be on both shows, and we have some special guests, like Rob Paparozzi, Tommy Labella, Byron Crawford Smith, and Jack Pyrah. Both performances will be vaguely similar.

Is there one particular performance over the years that stands out in your mind, and if so, who, what, when, where, and why?

Of Bob’s, ‘Johnny Cash Show’ with he and Johnny singing ‘Girl of the North Country.’ Of ours, a toss-up between Mary singing ‘To Make You Feel My Love’ or Steve singing ‘Every Grain of Sand.’

What is your favorite Bob Dylan song and why?

Has to be ‘Every Grain of Sand,’ and I’ve had the pleasure of hearing Steve Delopoulos deliver it many times. Each time it is transcendental.

At press time, it looked like Dylan was going to reach his 80th birthday. Are you surprised he’s lived this long? Why or why not?
I’m just glad he’s still going and relevant.

Is Dylan the greatest songwriter of all time and why? If so, what makes him better than everybody else?
I’ve never been one to see Music as a gradable competitive sport. I strongly believe in the Muse and that she is fleeting at her best. Bob has managed to maintain a relationship with her for over 70 years.

Have you officially released any of the live material from BobFest in any medium?
We released ‘That’s a Bob Dylan Song’ in ’09. It’s a double CD you can hear on Spotify  and buy on  Apple Music. I have miles of recorded footage and hope to release a film one day.

Where can folks get a glimpse of past BobFests on YouTube?
https://youtu.be/8mH9pduZtFM

How many original albums have you put out, what was the last, and what is the next one?
I have five. The last one was ‘Just A Song Away,’ recorded live. I am working on two studio albums now.

Your brother is married to the former Lt. Governor. What his name, and is he also musical?
Honorable Michael A Guadagno, Superior Court Judge, has been playing with me on and off since he went to law school.

Are The Candle Brothers still together? If so, what’s coming up for them, and if not, do you keep in touch with them?
We are. Phil ‘Red River’ Rizzo is with me at BobFest every year, and we work together on occasion. Frank Sabo is in Florida, and we are working on a Candle Brothers album. I hope it sees the light of day before we see the dark of night.

You have a nice Irish tenor? Are you part Irish?
Me Mum was Irish, Clan Campbell.

While Dylan inspired you to write songs, who inspired you to sing and why?
I was more inspired to write by Dr. Suess. I threw away my pen and notebook the day I heard Kris Kristofferson sing, ’Freedom’s just another word for nothin left to lose.’ Dylan’s level of songwriting was absolutely unattainable, and my dad told me when I left the family business to be the best at whatever you do. Inspired by Richie Havens, Jose Feliciano, and Leon Russell, I found a niche and an ability to turn other people’s music into my own. Those split royalties sure don’t amount to much, but folks seemed to like it.

Dion DiMucci inspired me to sing. That’s an easy one.

Are you a Jersey Shore native?
Born and raised in Monmouth County. 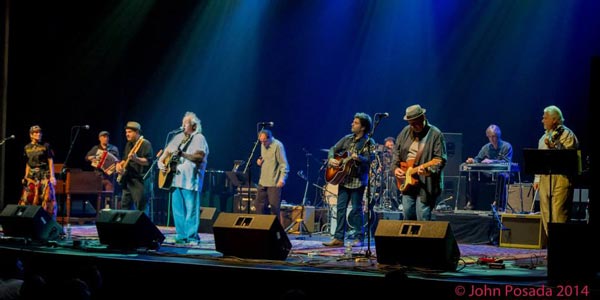 What’s next for you after BobFest?
I just finished doing a John Prine tribute with Rex Fowler from Aztec Two Step. We’re looking to take that out after BobFest. I’m also working on a Tom Waits show, as well as a Van Morrison, but it’s so tough to plan in the current environment.

You are a journeyman independent singer-songwriter who’s released your own music on a variety of formats. What do you think of streaming recorded music and live streaming, what impact has it had on you and your music, and does your being able to rely on live performance negate that impact under normal circumstances?
Music and business are two words that do not belong in the same sentence. I gave up trying to understand that connection years ago. Musicians complain about getting ripped off by streaming sites, like Spotify, and we probably are. All I know is that every year I make a couple hundred bucks from those streaming sites, and take myself out for a great steak dinner with one million friends I would otherwise never had known.