Makin Waves Song of the Week: "If Santa Claus Were President" by The New Bardots
By Bob Makin 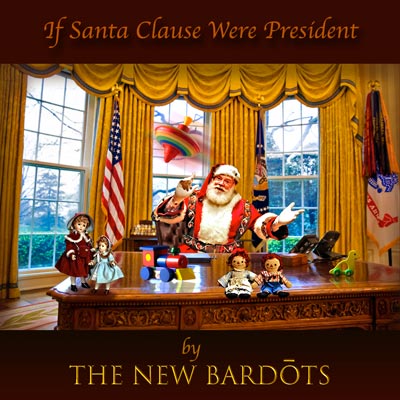 Three-fifths of Central Jersey-based The New Bardots have been playing together since the 1970s in such bands as Rockids, Oliver’s Twist, and Oliver Wylde, so it’s no surprise that they wrote and recorded their satirical new holiday song, “If Santa Claus Was President,” within days of the recent election. The band’s maiden voyage on the Italian indie I Couchie Records, the funny, heartfelt tune is the Makin Waves Song of the Week, and its video premieres here.

As the Makin Waves Song of the Week, “If Santa Claus Were President" also can be heard at 5 and 11 a.m., 5 p.m. and midnight at ThePenguinRocks.com and 6:45 p.m. on Friday and Monday on its “Radio Jersey” show. The all-star group features Wayne Olivieri on lead vocals, Rockids and Oliver Wylde bandmate Gar Francis on guitar, and Oliver’s Twist bassist Dan Skye. They are joined by drummer Johnnie Rago and keyboardist John Croot Jr.

I Couchie must be a great label because once upon a time both Wayne and Gar owned their own, respectively Oneway and Bongo Boy records.

“They are based in Milan,” Wayne said. “We wanted to put out a Christmas song so Gar brought down this music two weeks ago. We started arranging it and knew we didn’t have much time. Most radio stations pick their holiday playlist in early-to-mid-November. Because of the election and what was going on, I came up with ‘If Santa Claus Were President.’ We went into the studio last Monday and recorded the song. Dan Skye mixed it the following two days.

“Due to time restraints, I decided to do a word video so we could get it out hopefully before this election was finalized,” he continued. “I directed the editing and came up with the concept. I called my friend Nick at Invisualpost and worked on the video together via Zoom, phone, and texting. He finished doing the actual editing late Monday night.”

While not at as frenetic a pace as “Santa,” the band constantly are writing and rehearsing and plan to return to the studio in late December or early January to record a new LP or EP, Wayne said. It depends on how many songs make the cut, he said.

The band also will shoot a third video to promote the “Already Been Chewed (A Return to Bubblegum)” EP, a tribute to the classic pop style released in the spring, Wayne said. The clip will be for the bubblegum-inspired original tune “Wake Up and Smell the Coffee,” he said.

Once travel restrictions are lifted, the band plans to tour Europe, Wayne said.

“Until then, we plan on continuing our writing and recording with a live show in early spring if allowed),” he said. “Once the new EP/LP is complete, we will start production on a video for the first single.”

The new holiday track is The New Bardots’ second Makin Waves Song of the Week this year following their cover of the pop classic “Yummy Yummy Yummy” from “Already Been Chewed.” Here’s the video for that and a couple of others by The New Bardots: