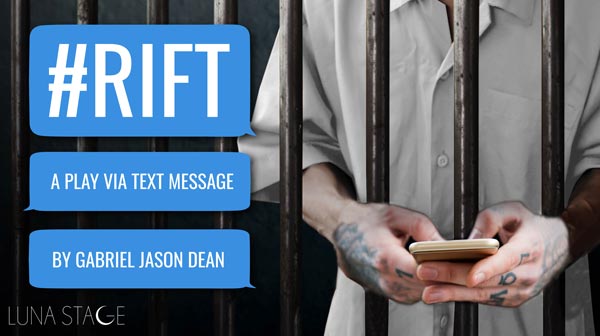 (WEST ORANGE, NJ) -- #RIFT by Gabriel Jason Dean launches this Friday, April 9 at Luna Stage. Part One of the play will be delivered to subscribers’ phones over text message over the next eight weeks. Sign-ups will be accepted through April 23, but capacity is limited. Reservations are required, and are available at lunastage.org.

Through the lens of two real-life brothers—one a convicted murderer, the other a playwright; one a member of the alt-right, the other an A.O.C.-type progressive—#RIFT explores whether it is possible to bridge fundamental political and ideological divides. Playwright Gabriel Jason Dean navigates a deeply personal landscape: his brother is currently incarcerated, and the two had barely spoken in 10 years. In creating this piece, Dean reconnected with his brother to explore the roots of their differences, to see if there is any way to find common ground, and to try to understand what love means in this context.

“In these divided times, when truth has become commodified and weaponized, I think maybe it’s the best thing I can do as a writer,” says Dean. “Just tell the true story. And in doing that, I think people will see themselves and their own truths in the story of my estranged brother and me.

This is the second collaboration between Dean and Kreith. Kreith previously directed Dean’s Heartland, and the production was named one of NJ’s Top 10 Productions of 2019 by The Star Ledger/NJ.com.

The second phase of #RIFT, launching later this spring, will encourage audience members to explore how they might reach across divides in their own lives and to share back these experiences via a virtual platform. Luna Stage and Dean hope to integrate audience reflections about rifts in their own lives into the design of the third chapter of this experience, a play that will be performed live and live-streamed at Luna in the fall.

“We believe that this deep and ongoing engagement with the creative process will allow audience and artists to become collaborative partners, grappling together with how we understand our past and imagine our future,” says Kreith.

#RIFT deals with mature themes including violence, sexual abuse, and racism, and is intended for audiences 16+.

#RIFT is supported by a grant from the Venturous Theater Fund, and is presented as part of the New Jersey Theatre Alliance 2021 Stages Festival, made possible by support from the New Jersey State Council on the Arts, a partner agency of the National Endowment for the Arts; Bank of America; The Horizon Foundation for New Jersey; OceanFirst Foundation; the George A. Ohl, Jr. Trust; New Jersey Historical Commission; and Fund for the New Jersey Blind. 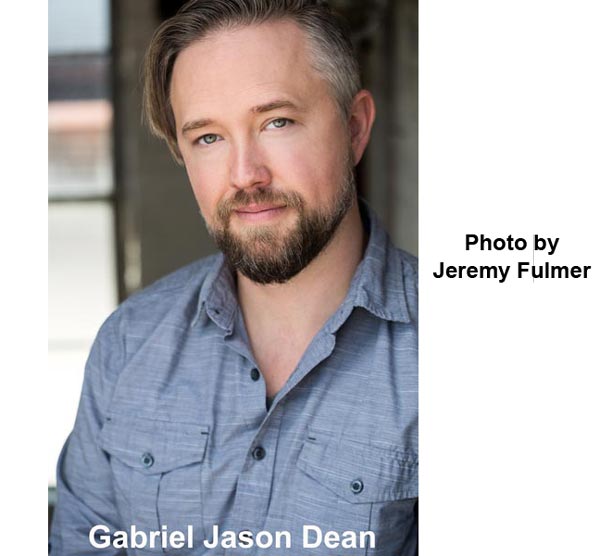 He penned book and lyrics for the young audiences musical MARIO & THE COMET (NYU Provincetown Plays for Young Audiences) and the immersive, activist musical OUR NEW TOWN (The Civilians R&D Group). He was recently hired to polish the feature film GET GOMEZ by Cranium Entertainment, and his script for television, WE BELONG (co-written with Jessie Dean) was a finalist for the Humanitas New Television Writer Award. Gabriel received the Hodder Fellowship from Princeton University, was a Dramatist’s Guild Fellow, Core Writer/Affiliated Writer at the Playwrights’ Center, member of The Amoralists’ 2019 ‘Wright Club, an Associate Artist with Monk Parrots and a Usual Suspect at New York Theatre Workshop. He is a Visiting Assistant Professor of Theatre and Writer in Residence at Muhlenberg College and on faculty for Spalding University’s MFA program. His plays are published by Samuel French, Playscripts and Dramatic Publishing. He received his MFA from UT-Austin’s Michener Center for Writers.

Gabriel grew up in Chatsworth, Georgia— a mill town in the foothills of the Appalachian Mountains. He currently lives in Brooklyn.

Kreith is the Artistic Director of Luna Stage, where she recently directed Jenny Lyn Bader's MRS. STERN WANDERS THE PRUSSIAN STATE LIBRARY, Gabriel Jason Dean’s HEARTLAND, and J.Stephen Brantley’s PIRIRA. She conceived and co-created Luna's VOTING WRITES PROJECT which premiered virtually August-November 2020, and developed Luna's site-specific SECRET CITIES program. Ari is also the founder and Artistic Director of Theatre 167, where she conceived and directed The Jackson Heights Trilogy— 167 TONGUES, YOU ARE NOW THE OWNER OF THIS SUITCASE, and JACKSON HEIGHTS 3AM — three full-length plays collaboratively written by 18 playwrights featuring 37 actors in 93 roles in 14 languages, inspired by the world’s most diverse neighborhood. Other directing highlights include MOURNING SUN, which premiered at Theatre 167 and toured to Uganda; the world premiere of Tina Howe’s SINGING BEACH; commissions for Queens Theatre and the New Ohio; and the European premiere of Adam Guettel’s MYTHS AND HYMNS. Ari has developed immersive, site-specific projects for Luna Stage, Queens Museum and the NY Transit Museum. A recipient of the LPTW Lucille Lortel Visionary Award and the NYIT Caffe Cino Fellowship, Ari received her BA from Yale and her MFA from UC Davis. Ari grew up in 27 countries.

Luna Stage develops and produces vibrant plays about local and global experiences. Firmly rooted in New Jersey's Valley Arts District — a crossroads of cultures — Luna brings our communities together for artistic events that spark conversations and create understanding and change.

The recipient of JerseyArts People’s Choice Award for Favorite Small Theatre in NJ for the past two years (2018 & 2019), Luna celebrates 10 years in its West Orange location this year. In addition to professional theatre productions on its MainStage and Luna 2, Luna offers classes for children and adults, opportunities for early-career and established theatre artists to develop new work, and has pivoted during the pandemic to offer a wide variety of free virtual programming.