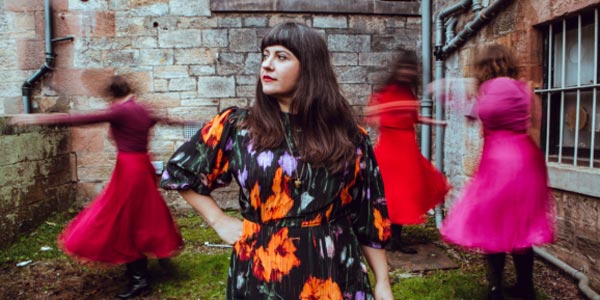 (HOPEWELL, NJ) -- Laura Cortese & the Dance Cards come to The Hopewell Theater on Friday, November 12 at 8:00pm. Expanding on the boundaries of what an indie-folk band can be, the band took their extensive string music background, added their knowledge of folk and roots music, and incorporated an edgy pop sensibility on their latest album, Bitter Better.

The album is a stunning lesson in all the ways string instruments can be played – bowed, plucked, percussively – the album showcases Cortese and multi-instrumentalist producer Sam Kassirer (Lula Wiles, Lake Street Dive) striving to capture the most adventurous approach to each moment. The result is an album that incorporates dance-worthy foundational grooves, synth, and loops to push the boundaries of the genre. Bitter Better was released on July 17, 2020 on Compass Records.

“Everything is so heavy in the world right now,” Cortese says, who’s been living in Belgium the past two years. “When someone comes to our show, listens to this album, or hears one of the songs, I want it to feel like relief and release.”

Tickets are $22 and available for purchase online.  NOTE: Proof of either a full COVID-19 Vaccination or negative COVID-19 test must be verified using the Bindle app and shown at entry. The Hopewell Theatre is located at 5 S Greenwood Avenue in Hopewell, New Jersey.

So how does one begin to chip away at walls of self-preservation and shame that create social confinement? For Cortese and company, one word came to mind: dancing. “When you dance, you let it all go,” she says. With that in mind, Cortese set off on a personal creative journey like none before — no rules, no restrictions, just the desire to create music that makes you move.

Kassirer helped her sift through her cache of over 40 songs and encouraged her to form songs from her snippets, riffs, and ideas. For the first time, Cortese opened up the songwriting process to The Dance Cards collective. She exchanged ideas and songs with her bandmates remotely, and then enticed a few with the promise of Belgian delicacies to cross the ocean and flesh out arrangements. From recordings of the players beating on all sides of their instruments, Kassirer fashioned loops and created bass lines with members of the band. Lyrics were honed through group examination, with the goal of framing each story in the most impactful way possible to inspire empathy in the listener. The work was quick, but it was deep.

When it came time to record, the band and Kassirer joined forces with  percussionist and engineer D. James Goodwin; together they completely dismantled the idea of how a string band “should” sound.

Cortese explains that the song that inspired the album title, “Treat You Better,” is about the complexities of long-term love, obligation and healthy versus unhealthy dynamics. “I started writing this a few years after I got divorced and was pretty disillusioned about finding a partner. I was asking some older friends -- couples that from the outside seemed to have healthy and lovely long-term relationships -- questions about their relationships. I found this coincidental link between many of the couples. The morning person gets up and makes the other one coffee and brings it to them in bed. Ultimately the song is about examining personal barriers to treating your partner better—how critical and cynical we get, juxtaposed against images of your partner doing nice things for you.”

“Where the Fox Hides” is a response to how isolated many people are in our modern, digital world and the loneliness it engenders.

“Belgium, my new home, is #1 for suicide in Western Europe. They keep a lot of distance socially,” she says. “People meet up with friends in bars instead of their homes. It takes a long time to make real friendships. Trying to integrate gave me new perspective on what it feels like to be an outsider”.

“From the Ashes” was a reaction to the devastating California wildfires. Cortese, originally from San Francisco, was inspired by the resilience of friends who lost their homes, and drew from her childhood experiences to write this autobiographical song.  “Corduroy” is about a “hipster who tries too hard,” and the haunting “Younger Man” was written on one of the three antique harmoniums (also known as pump organs or field organs) in Cortese’s Belgian home. Reading stories of chaplains and their harmoniums in the world wars — stories which often had tragic endings — the song evokes European battlefields and a sense of wartime history and loss. “Daylight” is a goodbye to her Boston home and a note to her friends to stay positive following the 2016 presidential election.

“There was a lot to feel hopeless about, big political changes and taking to the streets to protest. Friends had been marching weekly since January 20th and I could see our energy and optimism waning. I wanted to remind us to take care of ourselves and reconnect with hope and joy as the longer days returned.”

While the album’s 11 tracks provide relief and release, they also encourage self-examination and personal discovery—the work that is necessary to sustain the energy needed to keep striving, to connect, and to continue to make our complicated world a better place. With Bitter Better, Laura Cortese & The Dance Cards throw out the rulebook, creating a beautifully vivid, musically unexpected canvas from their refreshingly unconventional perspective.