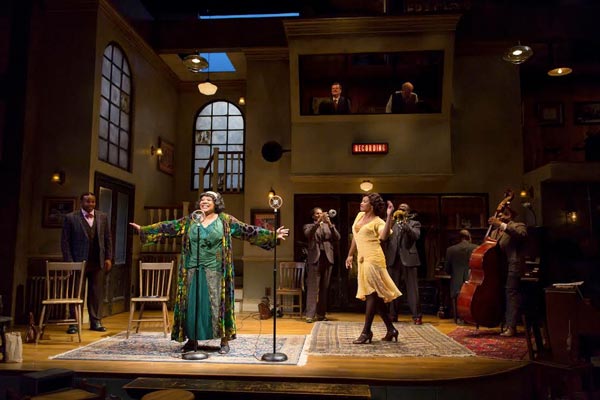 (RED BANK, NJ) — Sadly, there are just seven performances left of Ma Rainey’s Black Bottom, which closes on Sunday, October 9 at Two River Theater.  In what might be August Wilson’s angriest and most powerful play, Two River provides the definitive August Wilson production. Everything from the cast to the set is absolutely perfect.  If you have not been able to see the production yet, grab tickets for the remaining shows while you can.

Ma Rainey’s Black Bottom, part of Wilson’s American Century Cycle, takes place in the 1920s in a Chicago recording studio.  Ma Rainey is a famous black blues artist (Known as “Mother of the Blues”) who is the record label’s top selling artist.  She also is quite a piece of work — as much of a diva as could be expected by a black female artist of the day.

In the opening act, we hardly see much of Ma Rainey at all.  Instead, we see the record label owner, Sturdyvant (played by Peter Van Wagner) and the band’s manager, Irvin (played by Michael Cumpsty) set up the studio followed by the members of the band, Slow Drag (Harvy Blanks), Toledo (Brian D. Coats), Cutler (James A. Williams), and Levee (Brandon J. Dirden) practicing, joking, and waiting for their boss to arrive. 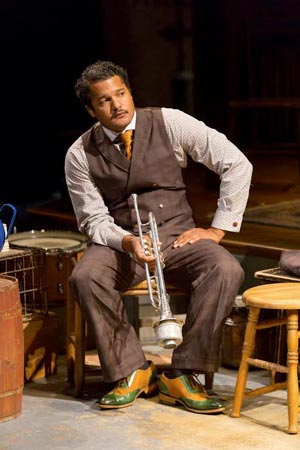 The band is an interesting mix from the business-like pair of musicians Cutler and Slow Drag to the highly educated Toledo and the ultra talented Levee.  The latter two have friction from the get go - based on everything from education to musical aspirations.

“You read too many books,” said Levee.

“What do you care how much I read?” replies Toledo.  “I’m going to ignore you ‘cause you ignorant!”

August Wilson sets up the play with a very simple premise — the band will record the song “Ma Rainey’s Black Bottom” and other tracks.  Unfortunately, there is a disagreement on which version of the song to play — Levee’s new arrangement (seemingly taking the blues closer to the emerging world of jazz improvisation) or the traditional version which includes a spoken intro.  When Ma Rainey (Arnetia Walker) finally arrives, it becomes clear which version they will do — she says they are recording the traditional version with her nephew Slyvester (Marcel Spears) providing the introduction.  The only problem is that the boy stutters.

The first act is tremendously funny, luring us into a very different place than the play will eventually take us.  Race and the struggle between the races has never been on display more for Wilson than in this play.  He also manages to show how white American took advantage of the talents of black artists, specifically how the music industry used them - as much for the music as the product itself.  It's difficult to watch this play and not think back to how the blues, jazz, r&B, and hip-hop all basically originated from black artists only to become part of white America as well.  This play reveals the sense of pride and the sense of loss as the artists themselves witness the changes.

At times, it can be very unnerving.  If you want theatre to challenge you or take you to places of the human condition that people tend to avoid, this is must theatre.  From the set design reminiscent of a plantation with the boss man high above the slaves to the back stories of the musicians and the generation gap between them, the play is full of uncomfortable situations — especially for a white audience.  Yet, its powerful message is inspiring.  It reveals the harsh truth about how freedom not only failed to change everything but may have simply rewritten the rules.  Seeing this production in the era of Black Lives Matter takes on an even more powerful and rather unique message. 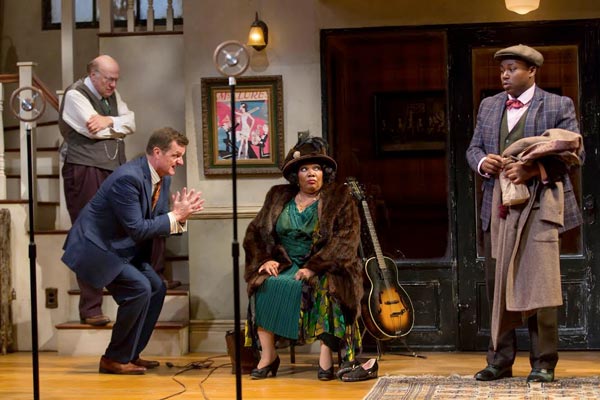 Two River Theater continues to give August Wilson’s cycle the productions they deserve.  In my opinion, Wilson is every bit as important to the American theatre as Arthur Miller or Tennessee Williams.  The entire cast is amazing and gets to take advantage of one of Wilson’s greatest gifts — the ability to fully utilize an ensemble to its utmost potential, offering everyone a scene or two in which to shine.  Highlights for me include Brandon J. Dirden’s deeply layered portrayal of Levee.  He isn’t just a cocky, young performer; he is a man that you just know has a back story and it’s a doozie. James A. William as Cutler will have you hearing his count off for each song for days afterwards — “a one and a two, you know what to do.” Arnetia Walker brings just the right amount of sass and confidence for Ma Rainey, while Brian D. Coats gives a great portrayal as Toledo, the elder philosopher trying to better himself.  But the true scene stealer is Marcel Spears as the stuttering Sylvester.  Anybody that has ever tried faking a stutter will appreciate the magic Spears does on stage.

Expertly directed by Ruben Santiago-Hudson, this is August Wilson at his best, backed by a stellar team.  Ma Rainey's Black Bottom is the fourth production of the cycle by Two River (following productions of Jitney, Two Trains Running, and Seven Guitars) and each one seems better than the last.  Here’s hoping they keep the cycle going…

All photos by T. Charles Erickson