John Lloyd Young's Vegas Valentine To Be Livestreamed On February 12 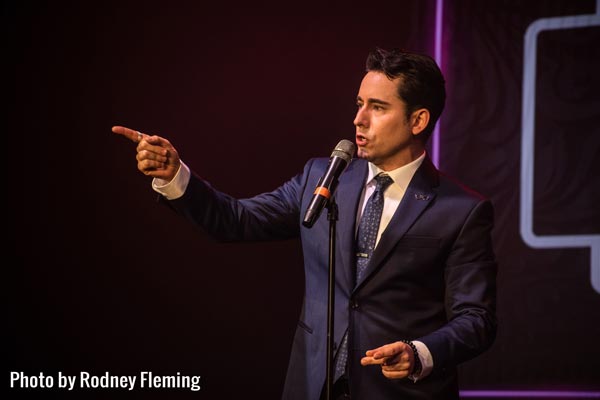 (LAS VEGAS, NV) -- Following the success of three previous live stream concerts from The Space in Las Vegas, Tony and Grammy Award-winner John Lloyd Young returns on Friday, February 12 with John Lloyd Young’s Vegas Valentine, an intimate and unforgettable evening of romantic classics and beloved Jersey Boys favorites that will offer an up-close and personal experience to be enjoyed with family and friends safely from home. The 75 minute live streamed pay-per-view concert will begin at 9:00pm EST and then be available OnDemand for one week following the live event. The virtual VIP after-party will begin at 10:45pm EST and include a talk-back, romantic surprises and an encore performance.

In John Lloyd Young's Vegas Valentine, Young will sing classic, swoon-worthy ballads from Unchained Melody to Since I Fell for You. With music director Tommy Faragher on piano, other beloved songs will include Only You to My Prayer, My Eyes Adored You, and Can't Take My Eyes Off You. Afterward, viewers are invited to a post-show virtual Valentine’s date, where over a bottle of wine, Young will have one-on-one conversations with callers chosen from questions they've submitted in advance, capped off with a grand-finale performance of a brand-new cover of one of the most beloved classic love songs of all time.

“I’ve been giving Valentine’s concerts for the good part of a decade,” said Young. “It’s a specialty and a tradition for me and the pandemic isn’t going to stop that. I look forward to having a special date night on February 12 with all my music-loving fans.”

JOHN LLOYD YOUNG is the Tony and Grammy Award-winning star from the Original Broadway Cast of Jersey Boys as well as Clint Eastwood's Warner Bros. movie adaptation. Young is the only American actor to date to have received all four major Lead Actor honors in a Broadway musical: the Tony, Drama Desk, Outer Critics Circle, and Theatre World Award. Young has performed concerts at The White House, Carnegie Hall, New Year's Eve in Times Square, The Kennedy Center, Lincoln Center, the U.S. Embassy in Finland, Clint Eastwood's Tehama Golf Club, The Hollywood Bowl, the Cafe Carlyle as well as Feinstein's/54 Below in New York, Feinstein’s at the Nikko in San Francisco and Feinstein’s at Vitello’s in Los Angeles. He served as a member of the President's Committee on the Arts and Humanities, appointed by Barack Obama.

TOMMY FARAGHER (Music Direction). From producing the #1 Billboard hit "Teenage Dream" for the acclaimed TV show “Glee,” to producing and writing for such artists as Al Green, The O'Jays and Celin Dion, Grammy nominated Faragher has over four decades of experience in the music industry as one of the most prominent producers, composers, songwriters and arrangers within international entertainment. Faragher has been working with John Lloyd Young as his musical director, producer/co-writer since 2012, producing John's album of Soul Classics "My Turn" and playing piano and directing live shows at The Cafe Carlyle, The Kennedy Center and venues all across the country.

The Space is Las Vegas’ Community Driven, Charity Based Arts Complex consisting of a 3000 square foot raw performance/event space, Black Box Theatre, Rehearsal Studio, Podcast Studio, and a Piano Bar. Since opening, it has hosted Tony Winners, Grammy Winners, fashion shows to birthday parties. They currently bring entertainment directly to guests, pay-per-view style, to bring Broadway and live music lovers the very best talent without leaving the safety of their homes, while also providing artists with the opportunity to earn income while reaching out to their fans during these challenging times.