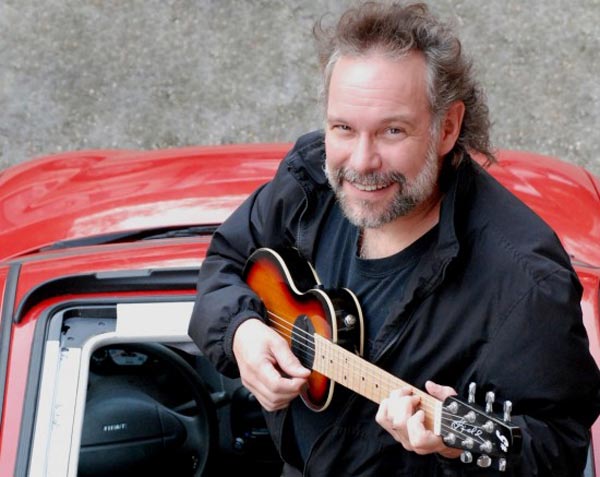 (TOMS RIVER, NJ) -- Iconic singer-songwriter John Gorka will kick off 2018 with a brand new studio album, TRUE IN TIME, on January 19, 2018. As well as being Gorka's first new studio album since 2014’s BRIGHT SIDE OF DOWN, this will be the first Red House album released through the Compass Records Group in Nashville, which acquired the venerable folk/Americana label on November 1st, 2017.  The Jersey native will perform songs from this album and throughout his career on Saturday, January 20 in Tom’s River at the Grunin Center for the Performing Arts in Toms River.  Singer-songwriter Amilia K. Spicer will open the night.

Produced by Rob Genadek at Uptown Sound in Minneapolis, TRUE IN TIME features a band of some of the Twin Cities best musicians in live sessions, with vocal cameos contributed by fellow folk luminaries Jonatha Brooke, Eliza Gilkyson, and Lucy Kaplansky.

TRUE IN TIME is an engaging, personal album that shows the full range of Gorka’s artistry, exhibiting his spirited acoustic guitar playing, insightful lyrics and wry, witty storytelling. The tracks capture the sound of career musicians (and friends) who understand where Gorka’s music comes from and instinctively knew what to contribute. You can hear the songs lock into place with a spontaneity and vibe that makes you, the listener, feel as if you’ve been invited to sit in. There’s a warmth, both sonically and in the interaction of the players, that makes this one of Gorka’s best, and that’s saying something.

The tracks sound fresh and lived in at the same time.  “A lot of the songs on this record remind me of Utah Phillips’ line ‘The past didn't go anywhere’ and Faulkner's ‘The past is never dead. It’s not even past,’” says Gorka of the album’s themes.

“I wrote the title song with Pete Kennedy (The Kennedys). When Carrie Fisher and her mom, Debbie Reynolds, died within a day of each other I quoted lines from Paul Simon's ‘Mother and Child Reunion’ on Facebook — ‘Oh I would not give you false hope on this strange and mournful day. But a mother and child reunion is only a motion away.’ Pete responded, ‘Maybe all songs come true in time.’  Later he wrote, ‘True in time sounds like a song,’ and we proceeded to write the song long distance via the internet. We collaborated on the title and the lyrics and I came up with the tune,” Gorka says. “I think that ‘What is true?' is a question a lot of us are asking today.”

Both "Arroyo Seco" and “Iris & Pearl” were born at Eliza Gilkyson's Casa de Musica songwriter workshop near Taos, NM.  “Iris & Pearl” was inspired by the names of Eliza's two dogs and their spirit. "I think they could have done all those things that they did in the song." says Gorka. “Nazarene Guitar,” inspired by his 20-year-old Martin guitar, was written for his friends at Godfrey Daniels Coffeehouse in Bethlehem, PA, where he got his start as a songwriter.

Three are earlier songs previously performed live but never before recorded for an album: “Blues with a Rising Sun,” a song about bluesman Son House and “Red Eye & Roses” were “lost” songs. “Someone sent me a cassette of me singing ‘Rising Sun’ on the Gene Shay radio show in Philadelphia around the time I'd written it, and “Red Eye & Roses” was retrieved by singer Anne Hills a few years ago. “The Body Parts Medley” has long been a frequent request at his live performances.

John Gorka continues to find new insights in the commonplace, beauty in the ordinary, the twist of bitter in the sweet, all delivered with one of the most distinctive folks voices of our time.