Jim Weider Talks About The Weight 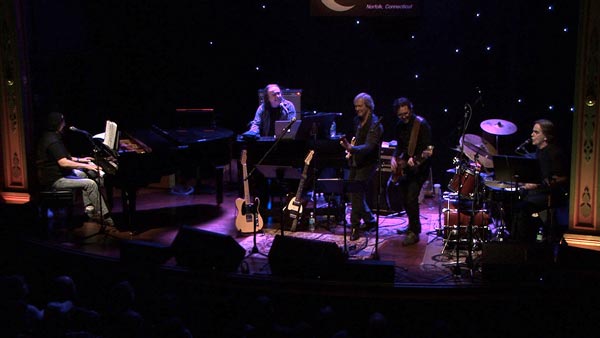 The Band may be best remembered for backing Bob Dylan and being the subject of Martin Scorsese's brilliant documentary The Last Waltz, but their music holds a special place in history as well. In fact, one could argue that they were one of the originators of the Americana sound so prevalent in today's music. Songs like "Up on Cripple Creek", "Life Is A Carnival" and "The Night They Drove Old Dixie Down" have been staples of class rock radio stations for decades.  The music continues on stage thanks to a group called The Weight, which takes its name from another classic cut.  The Weight will perform at The Newton Theatre on Saturday, April 18 at 8pm.  Tickets range from $32-$42.

Jim Weider and Randy Ciarlante started The Weight to not only pay tribute to the music of The Band but with the intention to to recreate the music as close to the original recordings as possible.

"Randy and I had done several shows with Jimmy Vivino and Garth Hudson from The Band, along with Byron Isaacs from Levon Helm band (playing the songs of The Band) and they went so well that when Jimmy got busy with his group The Fab Faux and Garth was touring with his wife we said why don't we do it?" said Weider, describing the inspiration behind The Weight. "It was really great to play the songs again."

The Weight mostly plays songs from The Band during their sets but will throw in something like "I Shall Be Released" by Bob Dylan as well.  Weider says his favorite songs to perform live include "Life Is A Carnival," "Remedy," "Whispering Pines", and, of course, "The Weight."  The songs have the feel of The Band because all of the musicians have a direct connection to the legendary group.  Both Weider and Ciarlante are former members of The Band.  Weider replaced Robbie Robertson on lead guitar in the 2nd incarnation of The Band from 1985 until 2000.  Ciarlante drummed and sang alongside Levon Helm in the second incarnation of The Band and also in The Levon Helm Band up until Levon's passing.  Both performed on three of The Band's studio albums (Jericho, High on the Hog, and Jubilation).  The Weight is rounded out by Brian Mitchell and Byron Isaccs who are both current members of Levon Helm's Midnight Ramble Band and Marty Grebb, who has written songs for The Band.

Having musicians with a direct connection to the songs of The Band is very important.  It lends a certain credibility and feel to the songs that help separate the live shows of The Weight with those of regular tribute groups.

Weider's career is full of great memories from his days with The Band.  Some of the highlights include meeting Eric Clapton, playing at Rogers Waters' The Wall with Ronnie Hawkins, performing at Carnegie Hall with a full horn section, and taking part in Bob Dylan's 30th Anniversary Concert Celebration at Madison Square Garden in 1992.

"The songs are such a big part of American music culture," continued Weider.  "They are what I grew up with and the music was a big part of my life.  It's the Woodstock/Catskill Mountain music for me, and its what Levon, Rick, and Richard would have wanted."

After the show in Newton, The Weight heads on the road again with stops in New York, Alabama, Georgia, North Carolina, Tennessee, Pennsylvania, Ohio, and Delaware  before returning to New Jersey.  They'll be headlining a show at the Levoy Theatre in Millville on June 13.  For more information on The Weight visit  www.theweightband.com