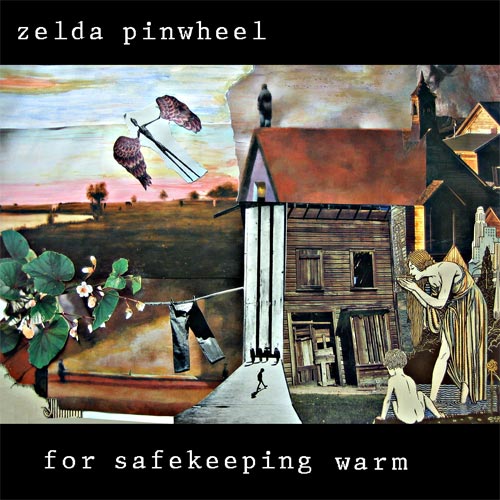 Do you think Zelda Pinwheel has been ignored by local media? If so, why do you think that might be so? Are you guys just too unique?

I think ignored by the Jersey media is kind of a strong word, but it's certainly been spotty. There have been instances where certain community college radio stations have seemed to go out of their way to ignore us. On the other hand, we've had great coverage on some other college stations like WRSU in New Brunswick and WPRB in Princeton. Media coverage in Jersey is a tricky thing. It all seems very genre conscious to me, especially in the print media. I suppose it's in a publications best interest to cover the most commercially viable music, but I think it's worth writing about more bands that are a bit left of center. It could only help foster a more diverse scene. I mean, you're doing it right? Jersey needs more of that!

The band (and its previous incarnations from the start) have been doing this for quite a while now. What's kept everything going for over 6 years?

Well, 6 years is a little high. Early on it was really just a name for this band that I couldn't seem to get off the ground. Then it was a name that James and I would stick on these 4 track recordings. Ralph joined up in 2002 and that was when we really started playing out a lot. I think that's when it became more then just a name. Back then it was all guitar loops and cymbal washes and drum machines and slide whistles and words that weren't words. Start points and stop points and transition points but the songs weren't really songs. More like set improvisations.

I think we've been doing this for as long as we have because we all really love playing together. Our lives are all pretty intertwined at this point. Ralph and James are partners in a live recording/cd duplication business and are in the process of trying to open their own studio! James and I are cousins so we're going to see each other anyway. I guess we both know that if one of us breaks up the band, it's going to make Christmas Eve really awkward. That would really upset Grandma.


I've seen Zelda's name on a couple of art/poetry related shows - most notably the Big Art Shows. How do you like doing those type of shows? Do you find that people who are into art are more into experimental rock or music that's not what you normally find on radio?

The Big Art Show people are really great! We've played two shows with them, one in Asbury and one in Philadelphia (where our bassist Brian and I live now.) They put on a good show. Art shows, poetry readings, film screenings, things like that tend to be good environments for us. Once you start adding other artistic mediums to the night, people's senses tend to awaken even more. That opens them up to the experience a lot. Last week we played a show at this little theater in Queens where we performed a soundtrack for show called 'The Monkey Moo.' It was a combination of modern dance and puppets. About half of what we played was improvised on the spot. That sort of thing is a lot of fun and the audiences are really quiet and attentive, but we're just as comfortable playing in trashy dive bars with flooded toilets and no PA.

Speaking of "experimental rock" and that label, labels generally drive bands nuts... does the word experimental drive you even more nuts? I mean, you guys do you a lot of different instruments but it's not like you're using parts of old cars (not that I know of anyway) like the Car Music Project - that's something that I'd call experimental.

Labels can be limiting. I think that's why most bands get frustrated with them. Someone slaps a genre on you and that becomes your expected sound. I guess it's necessary for myspace groupings and fitting bands into tiny little boxes for them to die in. I suppose 'experimental rock' as a label comes with the same pitfalls, but it's probably a little more freeing than most. We take it as a license to do anything we want. In and of itself, it's kind of a meaningless tag. I mean, if someone asks me what kind of band I'm in and I say experimental, most people aren't going to have any idea what the hell I'm talking about. It's just something that gets thrown on bands that people don't know what to do with, and I'm fine with that.

It's a nice feeling. It's easy to feel like you're working really hard and not being noticed. We never think about winning awards, but it's good to be reminded that someone's paying attention. The idea of an award for being Avant Garde is really interesting to me. It's like saying "OK, you guys are weird, but you're acceptably weird! Here's a trophy!" I keep the first one on top of my refrigerator for lack of a mantle.

Early on in the band's career it seemed like their was a bit more improving taking place on stage. Is the band playing songs more straight these days or do you still use improvisation?

Our goal in recording our albums is to have each one sound dramatically different from the one before it. The album that we're about to release (For Safekeeping Warm) is a lot more structured than anything else we've ever done. It's the first time that we'd ever come to practice with songs for the rest of the band to learn. But some of it was written by refining things that we originally improvised in practice. Improvisation is still a really big part of our process.

We improvise sound collages in between songs during our live shows to present our set as one long piece and few months back we released a split CD with JFK's LSD UFO called 'Blind Date, Episode 1.' That came out of just hanging out with them in the studio for 2 days and recording everything. It's 100% improvised. I think there are going to be 3 more episodes. Maybe 4, I forget. It's all waiting to be mixed. They follow the storyline of a blind date between the 2 bands. Episode 1 scours personals and makes the phone call to ask for the date. I think the next episode will be the "pre-game," followed by a sometimes awkward dinner date. I think we eventually fall in love.

The band has described the music as "melodic noise" -- How does noise become melodic?

I'd heard us referred to as a noise rock band, but that didn't seem quite right to me. That seems like something a lot more harsh and atonal than what we do. There's a lot of confusion and clamor in what we're trying to get across, but there are peaceful and playful aspects to it also. Sometimes an idea is best described with blaring walls of feedback and dissonance and sometimes by quiet, pretty piano trills... It's a constant blending of the beautiful and the grotesque.

How has the band's music changed over the years? Is this new record representative of a direction you've been heading or something completely different?

Our first collection of 4 track demos {Home(?)} was all acoustic music. That was me James and and old friend of ours named Pete Petrovic. After that we made a couple of albums that were largely improvised, but the improvisations were treated very differently on each. 'For Safekeeping Warm.' was us learning how to write songs together once we started playing with a bassist (Brian Dominicki.) It was a long learning process. We finished recording it awhile ago and immediately started to write new songs with a different bassist (Brian McGarry.) So now we're well into our next song cycle. We're playing a lot of these new songs live now, with sprinklings from FSW and the Patchwork record. Every records sounds really different because the writing and recording process has been really different, but elements from each record still work nicely within the same set.

Do you ever wake up one day and say "Damn it, I wanna be on the friggin' radio. I feel like writing a top-40 song today?"

A few years ago James and I were at a diner talking about producing a girl-pop album under an assumed identity. Does that count?

The new CD is called "FOR SAFEKEEPING WARM" -- is their a story behind the name?

I'm not sure if there's really a story... I use kind of a sound over sense approach with most of my lyrics. I know exactly what I'm getting at but I've never been interested in writing lyrics that make for easy or uniform interpretations, so I keep them a little on the cryptic side. I have a lot of fun with titles. 'For Safekeeping Warm' is a play on a line from the album's first song, 'Deathcamp Jamboree.' We thought that it did a pretty good job at relating a lot of the lyrical themes from the other songs. There's a lot of loss and isolation and paranoia on this record.

I've come across that cult in Google searches too! I'd like to think that they're all just huge fans of ours! It's really strange that we all exist separately. As for our coming to this name, that happened way before ZP was a band. I was in Germany with an ex-girlfriend drinking wine on a river bank on New Year's Eve. She and I were just sort of combining proper names with nonsense words. When she said Zelda Pinwheel it made me smile. Video games and children's television! Perfect! I got hopeless drunk that night and saw a castle torched. I didn't understand any of the words around me and wished I was younger.

January 5th @ The Fire in Philadelphia