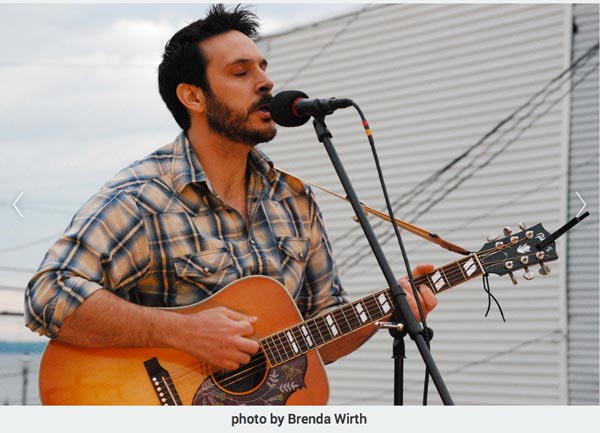 When you first hear the electric guitars roar on “Mercy of the Radio,” you know that Michael Askin’s Ignore the Evidence is anything but a typical singer-songwriter record.   The record does have its folk side, but it rocks out just as much.

“All of the songs on the E.P., in some capacity, have to do with either somebody trying to change or trying to forge ahead despite the evidence or things that surround them saying they shouldn’t forge ahead,” explained Askin.  “Hopefully, it’s a little bit of a positive message — that it is possible to change and to make progress in spite of the signs telling you that you can’t.”

Askin’s career has progressed far over the years.  He’s been known as the guitarist with the mystique in bands such as Divine Sign, Mable, and My State of Attraction.  On his own, his mellow songwriting has the vibe of a classic ‘70s Sunday afternoon radio special.  It’s a timeless sound that allows him to slide in and out of the singer-songwriter world or add a band and rock out to the same songs without losing anything.

“I think the songs work as introspective singer-songwriter / coffee shop performances because of the lyrical content, but I could also hear a lot of arrangement that was possible with these songs,” said Askin.  “I was also looking to incorporate a band sound.  I play a lot of electric guitar and I wanted to get a heavier, more vintage rock sound on a couple of these songs.”

His producer, Kurt Reil (from The Gripweeds), helped him find the sound he was looking for.  “He understood my vision and he had his own vision and sort of married them together,” described Askin.  “With Kurt I found someone who has many of the same influences, appreciates the same kind of music, and has the knowledge of how to get those sounds.  I was very excited to give him the opportunity to interpret what I was hearing and what I was going for.”

Many artists are hesitant to put their faith in a producer, but Ignore the Evidence is a good example of how that faith can be rewarded.  It’s something Askin has learned over the years. He’s also learned much from his girlfriend Jerzy Jung, a talented performer in her own right.  The two have written songs together and perform together on occasion, but mainly keep to their own projects due to scheduling conflicts.

“Jerzy’s taught me a lot of trying to be in the moment, trying to feel the music when you’re performing, and losing yourself in the songs and not holding back,” he added.  “She’s a true artist and she’s inspired me.  I think we push each other in a positive way.”

Askin has a Masters in Social Work from Rutgers University and is a licensed social worker, currently working part-time in a nursing facility.  He spends the rest of his time focused on music whether it’s providing guitar lessons, playing cover band gigs or original music shows.  The goal is to move one step closer to his dream every day.  It may be a struggle sometimes, but he’s learned to ignore the evidence telling him he can’t do it.  And with each day, the evidence is leaning more and more towards the idea that he can.