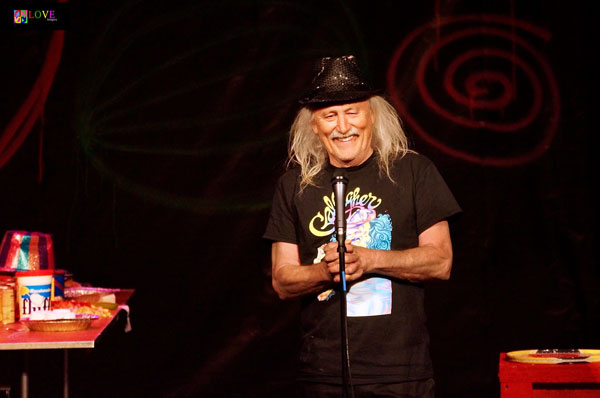 Gallagher is joking with patrons in the lobby of Lakewood, NJ’s historic Strand Theater this Thursday, May 24, 2018 evening. In his audacious style, he’s grabbing cameras out of the hands of patrons who want to take great selfies with him, while also taking the time to sign T-shirts for stand-up comedy fans waiting for him at the merch table.

When we approach Gallagher and ask how he enjoys performing for New Jersey audiences, he admonishes us, jesting, “You can’t ask me that — let me do the show first! Didn’t you do your research? I’m on the internet with poems and videos — why aren’t you asking me about my ‘Bucket List and Ways to Leave the World a Better Place?’”

Going on to reveal, “I’m 72 years old now! I started doing comedy when I was 25, so I’ve been dealing with people for a long time!” Gallagher jokingly exclaims, “I don’t hide in my dressing room like some other performers before their shows!” After asking, “How many of them come out and spend time with their fans before going on stage?” he heartily declares, “I like to be out with the people!” 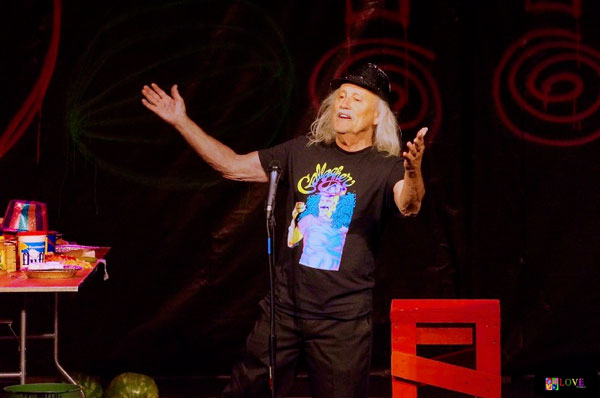 As we exit the lobby and make our way into the historic Strand auditorium — a place where, in the past, such vaudeville luminaries as Ray Bolger, Milton Berle, and George Burns and Gracie Allen have appeared — we can see that the walls on either side of the stage have been covered in enormous plastic tarps, and there is also a huge waterproof backdrop which reads “Gallagher” and “Party Artie.” In addition, the first eight rows of seats in the orchestra — the so-called “Splash Zone” — are covered in plastic garbage bags, and waterproof ponchos have been carefully placed on each seat for patrons to wear.

Taking a moment to chat with a woman who presently occupies a seat in the orchestra’s fourth row, Anna from Toms River, exclaims, “I’m excited! We’ve seen Gallagher three or four times before, but this is the first time we’re seated in the Splash Zone!”

When we ask Anna’s husband, Jerry, why the couple opted to sit in the Splash Zone, he replies, “It’s the craziness! It’s all part of the experience,” before adding, “ but in addition to ‘the crazy,’ Gallagher also tells real-life stories — he makes you think.” 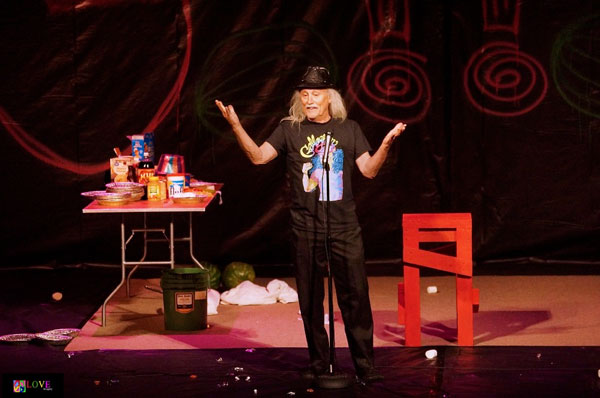 As we wait for the ‘crazy’ to begin, we notice a man helping his wife to put on her plastic poncho. There are also a number of patrons taking selfies in front of the stage which is set with two microphones, a red chopping block, and a table filled with boxes, cans, and jars of food in addition to candy, an assortment of pie tins, and — sitting on the floor — two nice round watermelons.

Soon, the lights dim and a voice announces, “Welcome to The Joke’s on You Comedy Tour featuring best-selling author and star of TV’s Law and Order — Artie Fletcher.”

Warm-up comedian Fletcher dances onto the stage to Diana Ross’ “I’m Coming Out” before stating, “I’m honored to come back to the state I was born in — the Garden State” joking,” if you lived here, you’d be guardin’ everything you own!” 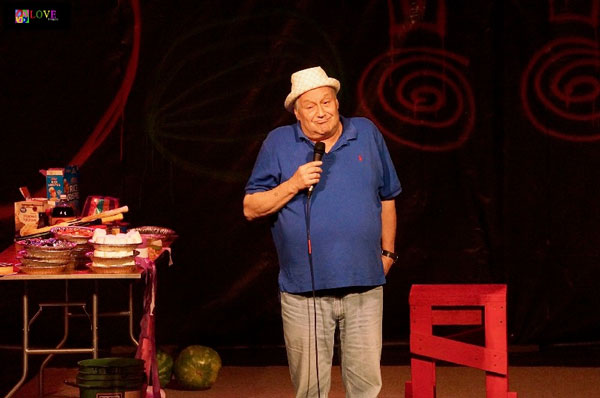 A Florida resident now, Fletcher tells the crowd about being “back in Jersey” — talking about his visit earlier in the day to Seaside Heights where a sausage and pepper sandwich at Midway Steak House and the sight of Lucky Leo’s amusement arcade on the boardwalk brought back happy memories of his youth.

Launching into an act filled with bits about food shopping in Florida, airplanes, senior citizens, Chris Christie, and getting old, Fletcher gets loads of laughs from the Jersey crowd.

Introducing today’s headliner, Gallagher, Fletcher announces, “He’s performed in over 4,500 shows and on 14 Showtime TV specials” before exclaiming, “We brought the party to you, so let’s get this party going!”

Here, Gallagher takes the stage and he and Artie use tennis rackets to toss candy — notably Hershey Kisses and York Peppermint Patties — into the audience — some of it reaching all the way up to the Strand balcony! They also shoot rolls of crepe paper and Silly String into the audience for laughs, especially from those who are repeatedly pelted in the Splash Zone. 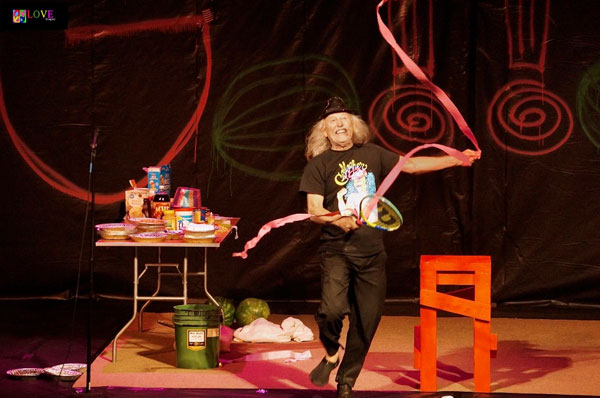 Gallagher asks, “Lakewood, New Jersey — why are you here?” to which the crowd happily replies, “For the party!”

“Did everybody get some candy?” continues Gallagher, joking, “If you’d spent more money you could have had more candy!”

Going on to announce, “None of this is rehearsed!” Artie Fletcher mugs and sings songs at random while he and Gallagher riff on everyday objects like exit signs, spoon forks, and sock hangers — in addition to talking about God. 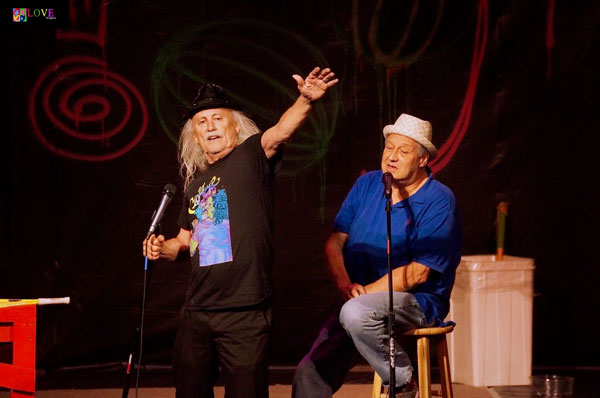 After pointing to Artie and stating, “I have him around to make me look good,” Gallagher says, “God invented laughter — the more you aren’t supposed to laugh, the funnier it is!” 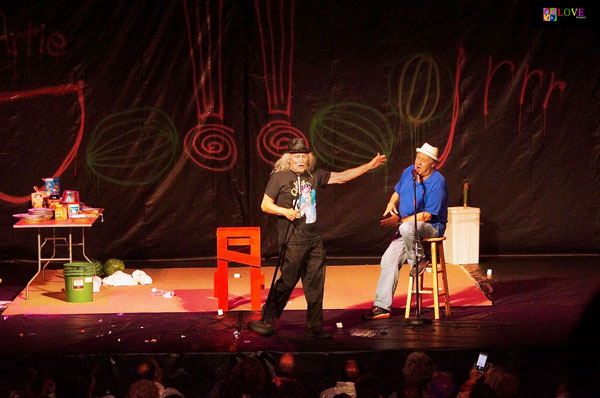 The audience roars when Gallagher takes off his hat and piles his hair on top of his head doing his impression of Donald Trump.

“I have to be outrageous!” he exclaims.

A large part of Gallagher’s act involves teaching the audience how to make a “Sledge-O-Matic party” which not only involves his trademark watermelon smashing with a sledgehammer, but also includes smacking a variety of custom-made pies — Rice Krispies and creamed corn, applesauce, corn and fruit cocktail, pumpkin and chick pea, lettuce and flour, and many more!

Revealing that, over the years, he’s learned that smashing a whole watermelon is not as effective as smacking one that is carefully carved into pieces, Gallagher shows the audience how to correctly cut a watermelon. 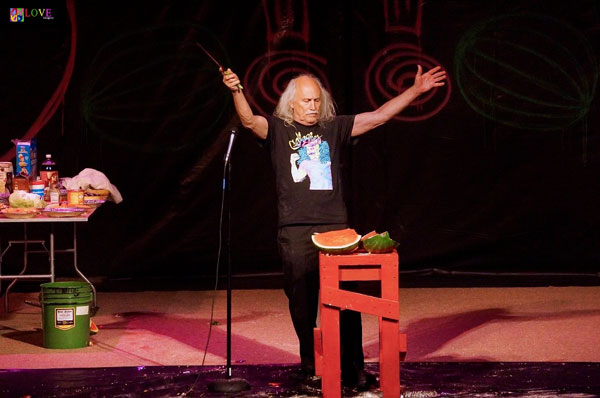 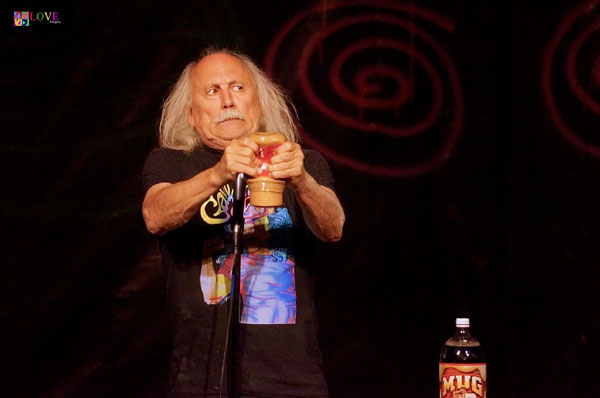 Announcing, “It’s birthday time!” Gallagher invites several volunteers from the audience up to the stage to smash some pies. Forming a semi-circle around the “birthday table,” Gallagher removes the center of the “birthday cake” and fills it with chocolate syrup before smacking it so that it covers all of the people on stage, in addition to revelers in the Splash Zone.

Here, Gallagher proceeds to smash some pies with his sledgehammer. 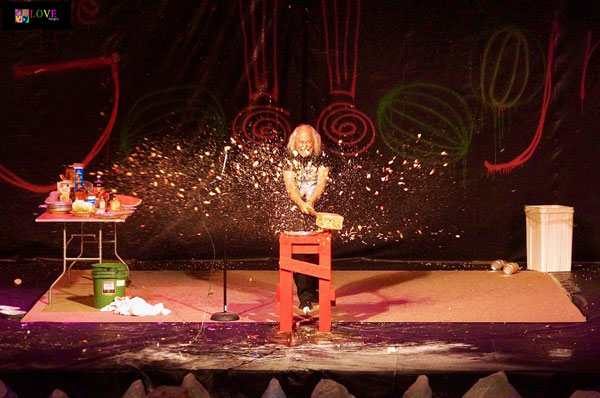 He also has several of his audience member volunteers do so as well, much to the crowd’s delight.

Tricking one volunteer, he makes the young man think he will be smacking a pumpkin pie because he “hates pumpkin” but, instead, Gallagher smushes the pie into the young man’s face before washing it off by spraying him with fizzy root beer!

Then, he has the young man smash a lettuce and flour pie. 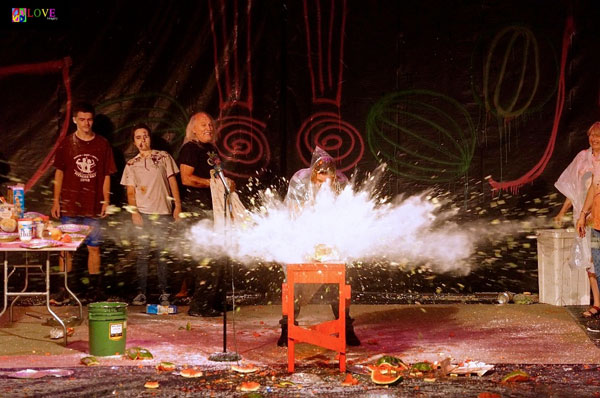 For the grand finale, rock and roll music rings out while Gallagher smacks a watermelon to the delight of audience members who roar with laughter — despite their being covered in smushed fruit, veggies, and other assorted goodies! 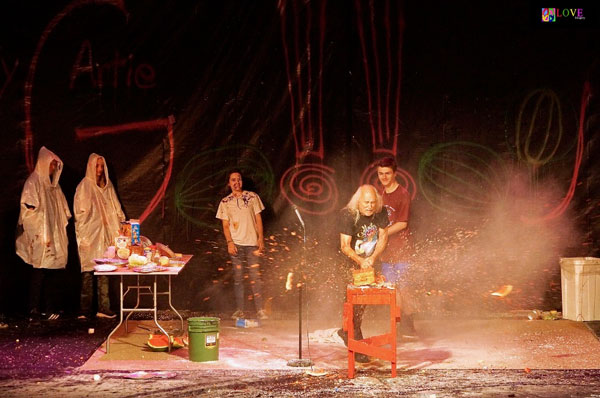 As audience members make their way out of the now fruity-smelling Strand auditorium, we chat with several in attendance who share their thoughts with us about tonight’s show.

Comments Robert from Howell, “Gallagher is a legend! I’ve seen him on cable, and when I learned he was going to be performing here tonight, I just had to see him live!”

Robert’s wife, Denise, concurs, adding, “We were in the fourth row,” before revealing, “We brought a clear shower curtain and put it over us so we didn’t get hit with anything!”

We also chat with Rosie from Lakewood who exclaims, “This show was so funny,” before noting, “but they’re going to have to have a cleaning crew come in tomorrow — this is the messiest show I’ve ever seen!”

Emily from Sea Bright agrees, adding, “I knew this was going to be a mess and I came anyway! It was hilarious — I was dying laughing. It was really fun. I didn’t know what to expect,” acknowledging, “I was way past the Splash Zone and I still got hit with kernels of corn!” 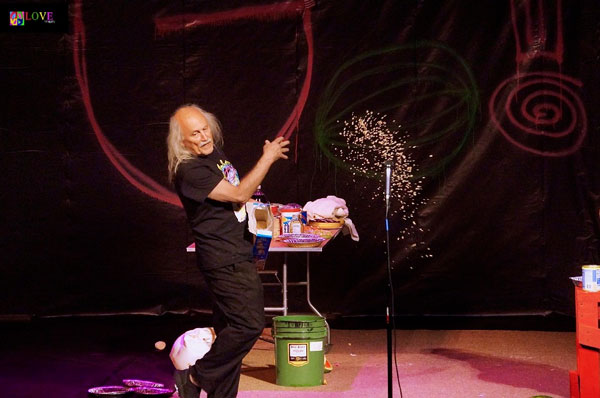 Barbara from Beachwood reveals, “This was my first time seeing Gallagher live, but next time, I want to be in the Splash Zone!”

Adding, “My husband and I got Gallagher’s autograph before the show — he was taking pictures with everyone,” Barbara further goes on to remark, “He’s the same both on the stage and off — very funny and very personable.” 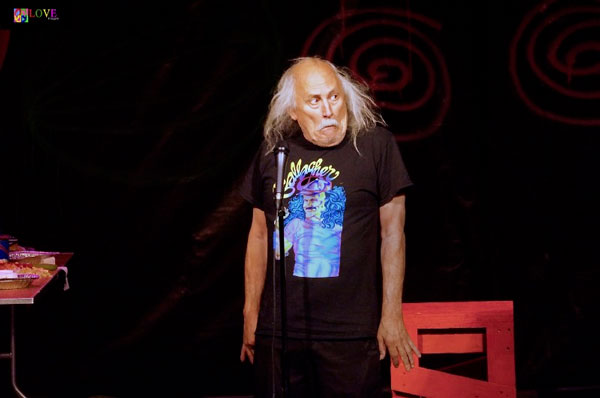 Barbara’s husband, Tim, agrees, commenting, “Gallagher’s show is filled with comedy that makes you think,” before Barbara concludes by stating, “This was the best show ever — it’s hysterical!” 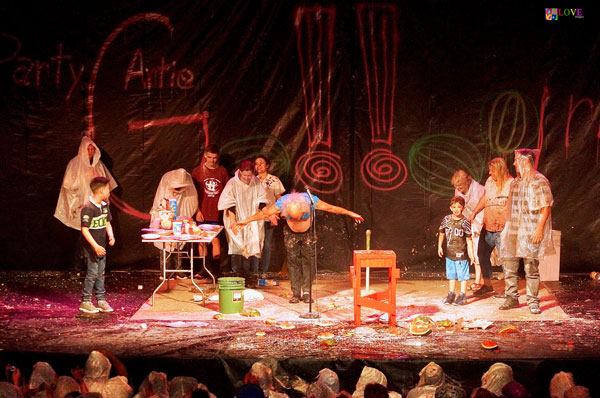 To learn more about Gallagher — notably about his “Bucket List and Ways to Leave the World a Better Place” — please go to gallaghersmash.com. To find out more about upcoming concerts at Lakewood’s Strand Theater — including Let’s Hang On: A Tribute to Frankie Valli and The Four Seasons on August 2, Remembering the King: A Tribute to Elvis Presley with Richie Santa on Aug. 18, and CSN Songs: A Tribute To Crosby, Stills, and Nash on Sept. 15 — please go to strand.org. 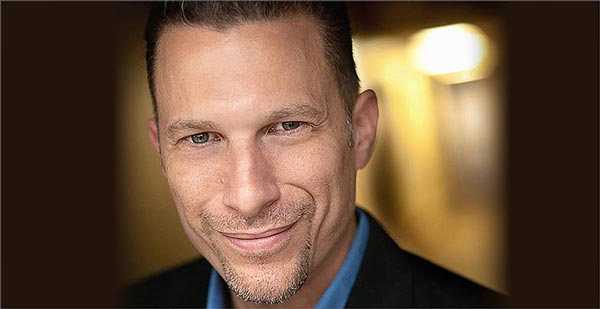