#18 Maybe Pete: Between The City & The Stratosphere 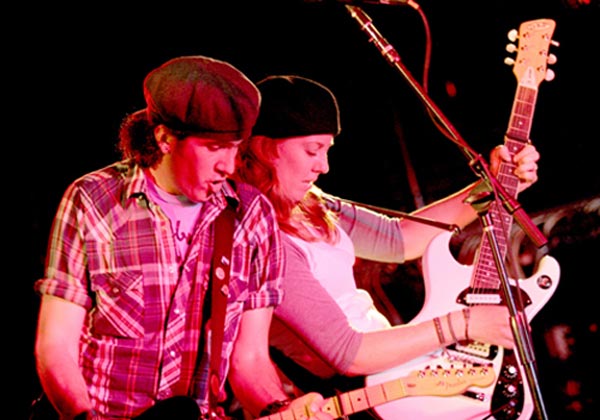 Nobody can really explain rock and roll except for maybe Pete Townshend.  That line from the film Almost Famous gave Frankie and Kelly McGrath the name for their band Maybe Pete.  The husband-wife duo started out from their East Rutherford location, but made their mark in Asbury Park clubs more than anything.

Maybe Pete was the latest in a long list of great North Jersey rock and roll bands to find a home along the Shore. While the band members have changed throughout the years, the core of Maybe Pete has always been Frankie and Kelly.

On their debut full-length album, Between The City & The Stratosphere, Maybe Pete showcase a variety of influences from the Replacements to Bruce Springsteen to the Rolling Stones and the New York Dolls.  It’s a blend of pop, rock, punk, and Jersey Shore sounds.  They may not be able to explain rock and roll, but they sure understand it.

Their debut album is like a greatest hits collection of the band’s early setlists.  The songs jump out at you with thundering bass lines from Marc Gambino, the band’s original bassist, and gritty, raspy vocals.  There’s nothing pretty about this band and that’s how they like it.  They want you to sit back and imagine you’re in some dark, dungy club, sweating from the heat of the crowd, with the beat running through your veins.

On this release, Maybe Pete established a knack for writing incredibly hook-laden choruses and biting, but melodic, guitar licks. You can actually see the band’s songwriting ability evolve from songs like “No One But Yourself To Blame” which was one of the band’s earliest hits to absolutely brilliant numbers like “Somehow” which became a signature tune for the band later on.