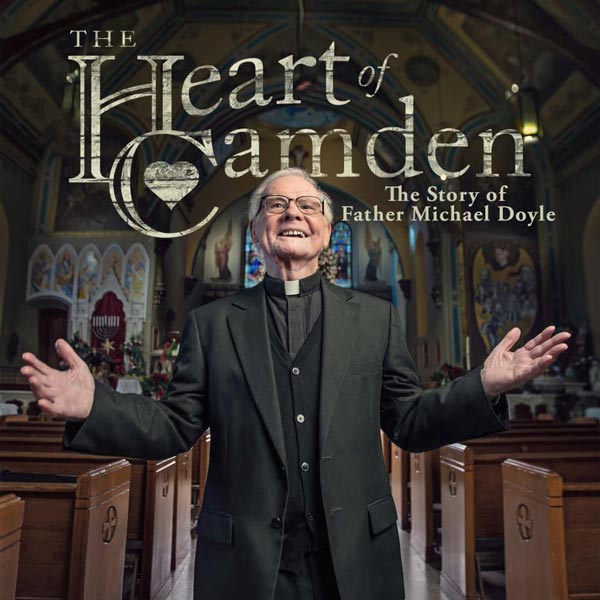 “Camden is a place… that holds beauty and holds pain.”

Few people understand that quote as much as Msr. Michael Doyle, who was the Pastor at Sacred Heart Church in Camden for sixty years, recently retiring at the age of 85.  Throughout his career he helped improve neighborhoods in Camden, gave the city’s struggles a national presence, and even got Mother Teresa to pay a visit. A documentary film called Heart of Camden: The Story of Michael Doyle tells his story.  The film is available for rent virtually on Saturday, February 13 as part of the New Jersey Film Festival.

Michael Doyle left Ireland for the United States as a young priest in 1959.  He settled in Camden, New Jersey and continued to serve his parish there for 60 years, despite opportunities to go elsewhere.  He saw the impoverished city as his mission in life.  Even with problems ( drugs, poverty, and violence) all around him, he saw the beauty in Camden.  A light that shone brightly within the city’s people.

Many people have grown up with negative images of Camden locked into their brain, but the city wasn’t always in bad shape.  In fact, a brief segment shows the city thriving pre World War II.  Martin Sheen, who narrates the film, talks as images of safe neighborhoods, corporations like Campbell Soup and RCA Victor filled thousands of jobs, and the Camden Shipyard fill the screen.  By World War II, the Camden Shipyard was the largest in the world.

“Afterwards, the boom went bust,” explained Sheen whose voice is perfect to narrate the wonderful words written by Sterling Brown.  “Industries employing thousands closed their doors.  The Shipyard in 1968, then RCA, then Campbell Soup… Much rushed in to fill the void, such as crime, drugs, and violence.”

The quote at the top of the article was by Carlos Morales, Executive Director of Heart of Camden, which started out as a volunteer housing organization to provide housing to people who would otherwise not qualify for traditional home ownership.  Morales was raised by a single mother and lived in people’s homes for a while before moving into a bad apartment in a dangerous part of town and eventually a homeless shelter for women.  His family was the beneficiary of a home gifted to the Church which Father Doyle offered to them and helped change their lives in more ways than one.

Father Doyle realized early on that one of the best ways to turn around Camden would be to help people become homeowners of their own.  Each new homeowner would play a role in keeping the neighborhoods clean and help them escape the path of drugs and violence.  Home ownership and the Heart of Camden was one of many ideas by Father Doyle over the years.

If you do not know much about Father Doyle, this documentary will be more than enlightening.  It is utterly inspiring.  Doyle’s story shows how one person can truly make a difference.  Over the years, Doyle was involved in everything from education to the arts, sports, museums, home ownership, the planting of trees and gardens.  In other words, he set out to provide the people of Camden with everything their affluent suburban neighbors had. And inspired others to see what the city could be as well. 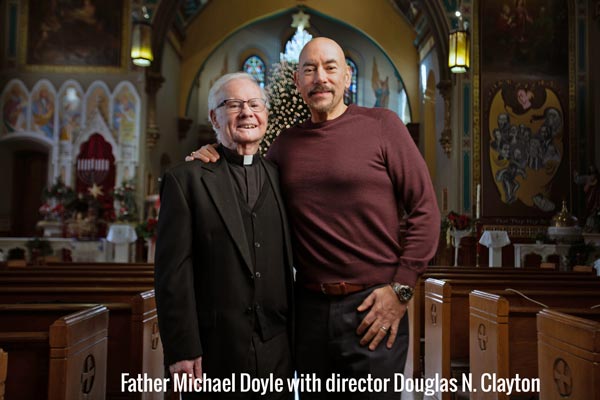 The film was directed and produced by Douglas N. Clayton, Ed. D who returns to the city he used as a subject with Dovere for Camden, a documentary that screened at the New Jersey Film Festival in 2018. Clayton himself grew up just outside of Camden in Collingswood.  He said he first became aware of Father Doyle when he saw him on “60 Minutes” in 1983, but would have a much more personal connection later on.  His sister reached out to Father Doyle for comfort after losing her husband.  Even though she was not a member of his parish, he was pleased to help.  Clayton also spent an hour interviewing him for his earlier film and later received personal advice from the priest on a conflict he was dealing with.

The crew behind the documentary included Frank Weiss who handled the cameras, Bill Horin (of Art C) who co-produced the film, and music by Barbara Dever, a mezzo soprano who grew up in Camden and has performed with renowned artists like Luciano Pavarotti, Placido Domingo, and Rubin Mehta.

“He’s given people the opportunity to follow through with their desire to help their fellow man,” said Morales.

One aspect of the film that really hits home is the fact that Camden is not just a place where these residents live - it is their home.  They want their children to grow up with the same opportunities that other communities take for granted - good schools, save neighborhoods, places to experience the arts and partake in sports, for example.  Step by step, year by year, Father Doyle helped bring these parts of life to Camden. 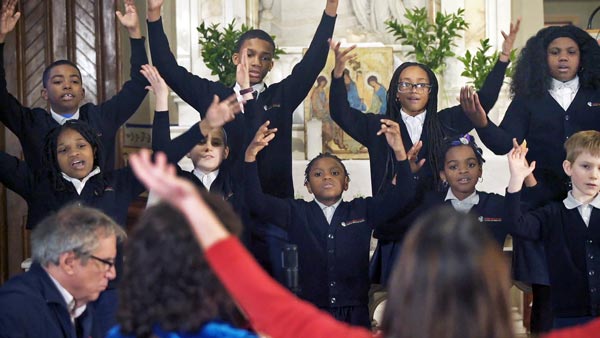 Clayton points out that in many Catholic parishes, priests are encouraged to move after spending a few years.  Doyle had such opportunities, but chose to stay.

As the documentary points out, there were things a priest could do to help places like Haddonfield or Cherry Hill, but there was always things to do in Camden.  It was a challenge that Father Doyle welcomed.

The film does a nice job of showing how Father Doyle truly walked the walk when it came to his beliefs.  He was part of the Camden 28 group who staged a raid on Camden’s draft board with the intention to destroy records and prevent more from being sent to the Vietnam war.  His anti-war beliefs stayed with him and led him to preside over the Church’s Annual Peace Gathering each year.  It was an event where people prayed and advocated for world peace and social justice. 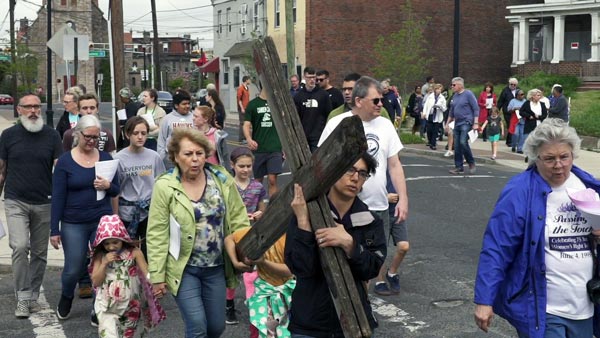 In an era where more and more people left the Church, his goal was to have Sacred Heart Church resemble the vibe of an Irish pub.

“What’s about an Irish pub?” asked Father Doyle in the film.  “Well, if you go into it you will be welcomed as if you’re one of the family.  And if you weren’t there, you would be missed.”

Director Clayton says he set out to make a film that told the truth and was inspiring. Based on the response he’s had from people who have seen the film, he accomplished his goal.

“There’s a fellow from South Carolina who watched the film and he called me to say, ‘Wow, it’s really something.  I’d like to talk to you about Father Doyle.’ We talked and he said, “I’m thinking about reaching out to the school to see if they could use a scholarship fund or something like that.’  It amazed me that someone from South Carolina who isn’t connected to Camden at all would feel like that,” recalled Clayton.

Clayton’s job takes him all over the world and responses from people he knows in Western Europe or the former Soviet Union have had similar responses.  “There are people I know who have watched it and they’ve never heard of Camden before,” continued Clayton.  “And they said, ‘It makes me want to do more in my community.’”

“I think that’s the impact that he has,” added Clayton.  “It’s not the film that makes people want to do more, it’s listening to Father Doyle.”

The director says he hopes the documentary helps put Camden on the radar of people who may not have thought about the city much and lead them to see it through a different lens. Then either get involved with the city or with their own local community.

Clayton was so impressed with Father Doyle that he’s in the process of using the film as a foundation for teaching leadership development.  He points out that many organizations and corporations are interested in having their leaders go through a leadership session and he feels Heart of Camden could be helpful in that process.

Father Doyle famously says that he “failed nicely” regarding his work in Camden, but it’s hard to see how he could have done any better. He found himself in a town that had many problems and tried chipping away at each, one at a time.  The title of the film has an obvious double meaning.  It is the name of an organization, which has built and rehabilitated homes for over 350 Waterfront South families in Camden.  But the heart of Camden for the last 60 years has been Father Doyle. 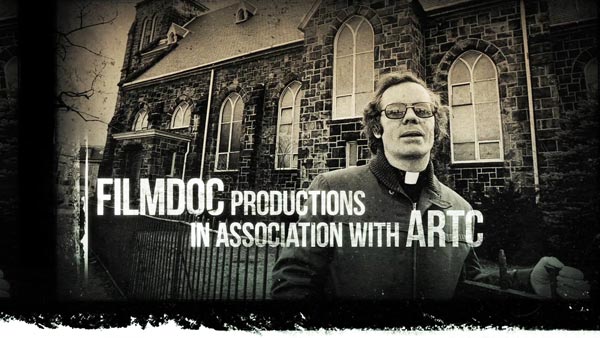 Heart of Camden is available to rent and screen from anywhere in the world on Saturday, February 13. It is available for $12 and also includes the film Stranger/Sister.  In this film by Kirsten Kelly and Kelly Taber, two women, one Muslim and one Jewish, dare to believe they can join hands to stop hate. They ask women across the U.S. to overcome a history of distrust and go from strangers to sisters, and unite against the rising tide of hate in America.