Tell me about the play.
Clare Drobot, resident dramaturg and producing associate for Janice Underwater, described it as sort of a coming of age story for a woman in her thirties. I think that's a good way of looking at it.
Janice is going through hard times. She gets a letter from her schizophrenic mother, whom she hasn't seen in twenty years. Her father shows possible early signs of Alzheimer's disease. She avoids dealing with either situation. Instead, she mails out some genetic tests she got online and the anxiety this creates leads to a blowup at work and triggers visions of her mother, which occur throughout the play. She tries to find paying work as a visual artist (her true passion), make her rent, maintain her sanity, and make the right choices for herself and her family as she waits for these test results. She even initiates a romance with her troubled super along the way. Things don't turn out as she expected.

A number of the scenes actually take place in parts of Union County.   Were those locations originally in the script or did you change them for the production?
These locations were originally in the script. I grew up in Hillside and know all these places described in the play. I wouldn't change these locations for a different production. There's something important about naming Conant Avenue or Bloy Street or the Pulaski Skyway. Some of these places conjure up old memories for me, not all of them pleasant. This deep ambivalence felt right for Janice. Whether she'll need to move back to Hillside is a question for her.

How do you personally feel about genetic testing?  Do you think the benefits outweigh any moral questions? Or is it something we shouldn't be playing around with?
It's great that people can get a glimpse of their heritage through genetic tests, or that people who find out they have a predisposition towards coronary artery disease, for example, might be inspired to make lifestyle changes to prevent sudden death. But I'm not sure how I feel about this as yet another commodity in a free market. Direct to consumer genetic tests should be regulated to make sure that people aren't exploited and given inaccurate or unverified health information. That's happening with some recent FDA intervention and that's a good thing. It raises moral questions on a personal level too. After receiving results, should the consumer feel an obligation to tell close family members, for their own sake, if they want to know? Would sharing those personal results with a close relative be irresponsible without physician guidance? Even with physician guidance, there are questions. If people find out they have the gene for something like early-onset Alzheimer's, what can they do with that information? Would a positive result lead to problems with health or life insurance? Would it help a family to plan a course of action? I know it would stress me out to get tested for certain family illnesses. It would make my mind spin. I wouldn't use that as an argument against other people doing this. People should be able to find out these things if they want, and make their own decisions, to a degree. But I believe in oversight.

Have you ever noticed that people losing their mind is one of the few aspects of our every day life that remains a good source of comedy for theatre and films but hasn't fallen prey to political correctness for such a sensitive topic?  Any ideas why that might be?
I'm not sure. My play is a comedy-drama. Parts of it are funny; parts of it should hurt. Much of what these characters are going through is painful and horrifying. It's my intention to treat the topic with sensitivity. I have close family members who suffer from various mental illnesses. These conditions aren't a joke. But sometimes it's important to laugh. Humor can be avoidance or a way of not feeling. It can be cutting and glib and hollow. It can also be recognition of the absurd, expression of bitterness, and a way of coping with pain. It can be character-based. It can give voice to the dead, who have funny things to say. That's what I'm trying to do in this play. I see comedy where my own obsession and fears and poor decisions intersect with these characters. This is when the humor feels important to me, when it's true and finds a communion with people in my play and in my life. Much of the humor in the play revolves around terror and humiliation in ordinary situations. Those moments are not bound up in the topic of mental illness exclusively. 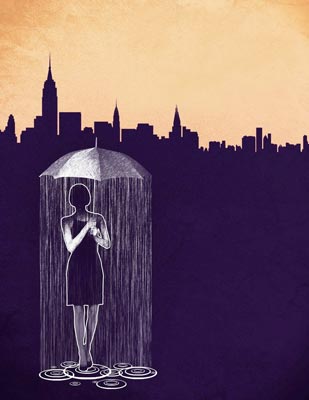