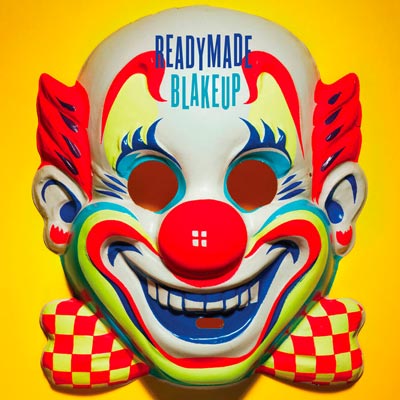 "Why did we even bother? Why go back 17 years to finish up demoes of music that no one was really asking to hear, for a band that relatively few people even heard about?"

The question is posed by Gay Elvis on the Bandcamp page for the EP Readymade Blakeup by The Blakes.  His answer was, "I guess it's because we had some unfinished business... Not in the action hero revenge 'I'll be back' sort of way, more in the, ah man I wish we did things a little differently sort of way."

The Blakes were a power pop band in Central Jersey in the early 2000s that included Paul Rosevear, Gay Elvis, Chris Thumann, and Pete Degeorge. Songs from this record were supposed to be on the follow-up to the band's debut EP, but remained unreleased for 17 years.  After the band moved on, Paul and Gay Elvis would form Readymade Breakup and go on to release several records.

This EP release (recorded just before the pandemic hit) was finished with both the original members of The Blakes as well as members of Readymade Breakup. Gay Elvis describes it as "four more songs in the vein of The Blakes: big guitars, thundering drums, stacks of vocals, with a twist of that Readymade crunch, jangle and strum."

New Jersey Stage reached out to Gay Elvis to learn a bit more...

On the bandcamp page you go back and forth between calling this a Readymade Breakup reunion and a Blakes reunion. Which way do you lean the most?

It was always intended to be a reunion for The Blakes. We were hoping to finish these demos with the original lineup: Me, Paul, Pete, and Thumann, but as we got further and further into the recording process it was seeming less and less likely that Pete was going to be part of it, so we made the call to finish a couple of the songs with Jim and Matty of Readymade. Naturally when all hope was lost on Pete... He showed up... Which presented a nice problem to have. We considered splitting the two sets of songs up into exclusive releases, but it wouldn't be a true Readymade reunion without Spicy on drums, so we kept them as one EP... To answer your question though with the nucleus on each song being: Me, Paul and Thumann... The project skews towards Blakes for me.

Tell me how this record came about.  Did you just discover the demos or somehow think of them and decide to pursue it?

No this wasn't some sort of Indiana Jones scenario... We had these incomplete recordings sitting around since 2003 and the idea of finishing them up with the original Blakes lineup had been on our radar for a number of years. We started kicking it around as far back as 2011 when Readymade broke up and there were a few failed attempts in between then and now when we were finally able to get it off the ground.

What was the initial feeling by everyone when the idea came up to record these demos from long ago?

I think we were all into the idea of doing it, it was more about time and when we'd be able to actually get it done.

Since they were demo tracks, I'm guessing you probably did not play them live very much if at all.  Did you remember the songs or have to relearn them from scratch?

It wasn't a matter of relearning the material. We used most of the original tracks that we recorded in 2003 and then just added a whole lot on top of that. I recut a couple of bass lines, Paul recut a couple of vocals... Two of the songs: "Trouble In Opening Up" and "My Universe" we played out with The Blakes but those were songs that came about after Pete had left the band, so he wrote most of his parts for those two songs the day of the studio. The other two: "Trespassing" and "Jealous of the Sun" actually made the jump from Blakes songs to early Readymade songs, but we never played them with Jim and Matty, so same deal for them, they came in with an idea of what they wanted to do, but for the most part improvised their parts in the studio.

What was it like getting back together and playing music again?

That was the best part. Getting to hang out with everyone and share some laughs again. I think everyone did an amazing job musically, but that was secondary to just getting to spend some time with old friends.

What do you remember the most from The Blakes days?

I remember recording New Tattoo and just being totally engaged in that process in a way I was never before with music. I felt like we were really on to something special. We were all on the same page and firing on cylinders... I was pretty much non stop living and breathing for The Blakes... We also had some epic parties.

How were the two bands (The Blakes and Readymade Breakup) different musically?

Readymade has five releases to date and each one of them differs from the other... But after the Blakes Readymade departed from that over the top Powerpop sound... Also, the parties we threw were less epic, but the partying on the road... epic... I'm grateful I didn't end up dead.

What has been the response by friends and fans of the two bands to the news of a new record?

Ah the friends and fans... I don't think we have either or... We've got "Frans". The response has been great! Thus far no one has said it sucks, but your Frans won't usually say that kinda stuff to your face... Even press will usually pass as opposed to saying something negative. Once someone wrote in a review that we were a second rate REO Speedwagon... Thus far no one has Speedwagoned us.

If there were any venues open, do you think you'd put together some shows? Or was the recording something on its own?

No shows. Thumann moved to Florida years ago and quit drumming. At the start of the pandemic we talked about doing some kind of live stuff over House Party but none of us could figure out how to work the app... So we quit.

Finally, this year has been strange for many reasons, but musically it's strange from a Jersey angle as well.  We've had new releases for the first time in roughly a decade by Dramarama, The Milwaukees, Wellbaby, and you guys.  Throw in a new one by Rick Barry and it's like a list of artists who could have played the Saint or Court Tavern back in 2004. Gotta say it's made me a little nostalgic.   If you could relive one period of time for a weekend, when and where would it be?

I'm going to take it back to before the Blakes, to my first band Kid With Man Head circa 1997/1998. We would go on tours throughout the United States and Canada... Recently I came across one of our old tour diaries that we printed some censored version of in Jersey Beat. Oh man the cast of characters that we would meet on the road... Life was just a non stop adventure back then. So if I was going to relive a time period it would be then, somewhere in Canada... As I look back on my musical "career" that now spans close to 30 years, I realize that it was as much about the adventure and camaraderie as it was about the music... I am grateful I didn't end up dead.