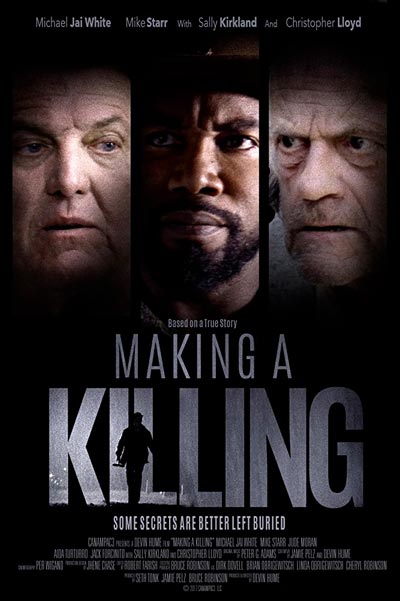 The backstory to this film is as compelling as the film itself. “Making A Killing” will screen at the Jersey Shore Arts Center with the filmmakers and several cast members in attendance, on Saturday, March 24th from 8:00-10:00 p.m. during the Garden State Film Festival which runs from March 22-March 25, 2018.

When New Jersey native Devin Hume met Canadian Bruce Robinson on a beach on the Big Island of Hawaii in 2016, it was the beginning of a beautiful friendship and exciting film collaboration. Robinson had hired Hume to do camera work for a documentary interview. Their interview subject went MIA, but the two met up on that beach anyway, as Robinson offered to treat Hume to lunch. When Robinson asked Hume if he had any ideas for a feature film, not only did Hume respond with a compelling and crazy true story... but said that he also actually knew the people involved! Although initially apprehensive about investing in a murder mystery, Robinson became too intrigued to pass this one up.

Hume told Robinson that it all began when he was seeking work in a small Colorado town in 2008/09. He responded to an ad by two Mortician brothers who were looking for someone to paint their mortuary. These men were philanthropists and highly respected pillars of their community – in addition to the mortuary, they held positions on the city council and one later even became the town’s Mayor. They also ran a church, owned a guitar store, a restaurant and more. Some time later, Hume enrolled in film school in Denver, but often returned to that small town to work on his film projects, as he had access to an abundance of resources there. His first few films were about Morticians because he knew them and was able to borrow their hearse, etc. During this time, Hume had begun a screenplay about these people, as he was fascinated by their life. Fast forward a few years, Hume had been away for a number of years and received a call from a friend telling him that the Morticians were suspects in a murder case. They were being accused of murdering another Mortician from a neighboring town, who was also a convicted pedophile. And there’s more…much more to the story….

Winner of  “Best New Mexico Feature Film” at the Santa Fe Film Fest, “Making A Killing” is only the third film to entirely shoot in Las Vegas, New Mexico (along with the original “Red Dawn” and “No Country For Old Men). The filmmakers chose this location because it had the look and feel of “anywhere U.S.A.,” had an abundance of resources, perfect weather and was extremely  “film-friendly.”