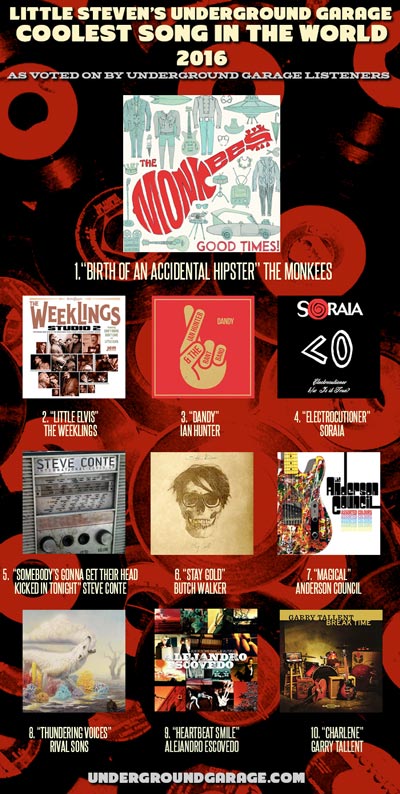 Little Steven’s Underground Garage may spin bands from around the world, but 4 of the top 10 coolest songs in the world for 2016 (as voted by the show’s fans) have a Central New Jersey background!  Coming in the top 5 was The Weeklings at #2 with “Little Elvis” and Steve Conte at #5 with “Somebody’s Gonna Get Their Head Kicked In Tonight.”  In the latter half of the top 10 was Anderson Council with “Magical” at #7 and “Charlene” by Garry Tallent to close out the top 10.

All four acts have been part of the New Jersey / New York music scene for a while.  The Weeklings feature a pair of Jersey Shore legends in Glen Burtnik and Bob Burger alongside John Merjave and Joe Bellia.  Steve Conte comes from the famous Conte clan that includes brother John (who played alongside Steve in Company of Wolves and Crown Jewels, and currently plays with Southside Johnny and the Asbury Jukes) and mother Rosemary, a well known Jazz singer in Jersey.  The Anderson Council, from New Brunswick, has been producing great 60s flavored pop/rock for over 15 years.  And Garry Tallent is the Rock and Roll Hall of Fame member of the E Street Band who is also a great producer and finally put out his first solo album in 2016.

Stevie Van Zandt of the E Street Band started his nationally syndicated Rock and Roll radio show, Little Steven's Underground Garage, in 2002.  The show takes audiences on a two hour trip through all 60 years of Rock and Roll, and it's roots.

Here is a look at the four Jersey tracks: