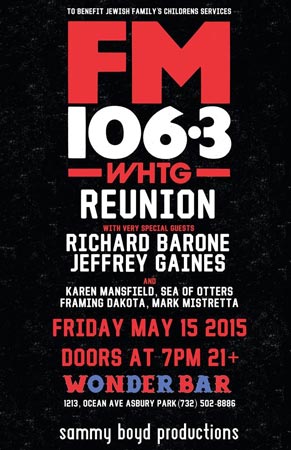 (ASBURY PARK, NJ) -- When Faye B. Gade, the former owner of the Jersey Shore radio station WHTG (better known as FM106.3), passed away on January 29, it sparked a renewal in nostalgia towards the pivotal alternative rock station.  Former DJs and musicians began gathering on social media and posting their memories of Gade and the station.  It didn't take long before the idea of a reunion show came into play and on Friday, May 15, the official FM106.3 reunion swill take place at The Wonder Bar in Asbury Park.

The reunion show features a lineup headlined by Richard Barone (from the Bongos and solo work) and Jeffrey Gaines.  Karen Mansfield, Framing Dakota, and See Of Otters rounds out the bill with former 106.3 DJ Mark Mistretta spinning all night long.  The show begins at 7pm and is open to 21 and up.  Admission is $15 and the show is a fundraiser for the Jewish Family & Children's Services of Greater Monmouth County.  FM106.3 memorabilia will also be for sale to help raise money for the cause.

For anyone that grew up in the 1980s in Central New Jersey, as I did, FM106.3 was the only station that mattered.  It was the station for those in high school and college back in the days when college radio was at its peak, FM106.3 was like a commercial version of college radio, regularly playing artists years before mainstream radio caught on to them.

There were four amazing aspects of the station in my opinion:

2) They included local bands in their playlist

4) Without FM106.3, The Green Parrot would not have become the legendary club it was

FM106.3 treated local artists with respect.  They didn't simply throw them on shows in the middle of the night, they put bands like Redhouse and The Blases in regular rotation.  They helped turn acts like The Smithereens and Dramarama into national brands.  And, together with The Green Parrot (Neptune), the station and its DJs helped create an entire scene.  The Green Parrot and 106.3 were basically partners -- one introduced people to the bands and the other gave them the opportunity to see them live.  Along with The Fast Lane in Asbury Park, alternative rock shows did far better along the Jersey Shore than outsiders will ever know.  It was a true scene and people were proud to be part of it.  So proud, in fact, that you were likely to see FM106.3 stickers wherever you went in Central New Jersey -- hundreds, if not thousands, of street signs carried the logo along with high school lockers, guitar cases, cars and trucks.  If it was a cult, we were part of it and glad to be part of it.

When I say the DJs were incredible, I mean really incredible.  Names like Matt Pinfield (who eventually became big on MTV) and Mike Marrone (currently on Sirius/XM's The Loft channel) were part of the station.  There was a creative freedom with the station that few stations of the day had.   Most of 90.5 The Night's current crew are FM106.3 alums who try to keep the spirit of the station alive, but there was nothing like FM106.3.  That's why this reunion show is so special.  Not only will it pay tribute to Faye B. Gade, but it will pay tribute to a bunch of music lovers who helped inspire an entire generation of DJs, musicians, and music fans.

The Wonder Bar is located at Fifth & Ocean Avenues in Asbury Park, NJ.  For more information on the event, click here.