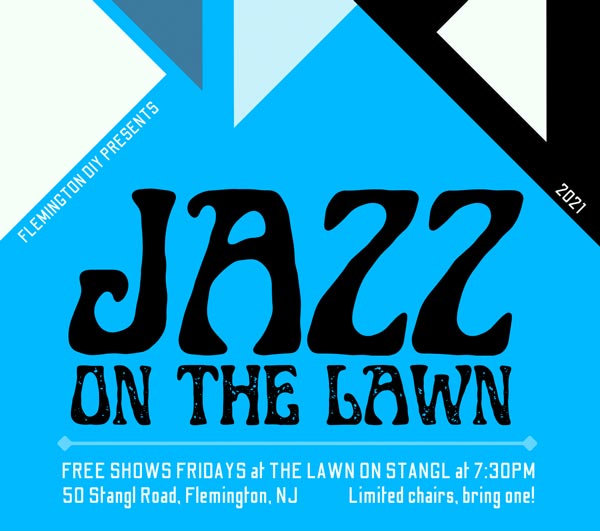 (FLEMINGTON, NJ) -- Flemington DIY presents the Jazz On The Lawn outdoor concert series with concerts on three straight Fridays from September 17 through October 1. All shows are free admission and take place at The Lawn on Stagl (next to Stangl Factory) on 50 Stangl Road. Music starts at 7:30pm. Just bring a lawn chair and enjoy the show.

September 17: Behn Gillece Trio (Behn Gillece -vibraphone, Bob DeVos – guitar, Steve LaSpina – bass) - With over a decade on the New York jazz scene, vibraphonist Behn Gillece has built a reputation as a virtuosic instrumentalist and prolific composer. With inspiration from such legends as Milt Jackson and Bobby Hutcherson, Gillece, throughout his career, has committed himself to advancing the art form of the vibraphone while flourishing as a jazz composer. A New Jersey native, Gillece had many early performance opportunities in his home state, as well as Philadelphia, before moving to New York City in 2006. Since then, he has made quite a name for himself as a sought after sideman, as well as a bandleader and recording artist.

October 1: Skip & Dan Wilkins Quartet (Skip Wilkins – piano, Dan Wilkins – saxophone, Tony Marino – bass, Bill Goodwin – drums) - Skip Wilkins is an American jazz pianist who splits his time between Eastern Pennsylvania and Central Europe. While in the U.S. he makes his home in Delaware Water Gap, living at the famous jazz club Deer Head Inn. In his adopted hometown Skip is a regular presence in the club and at the annual COTA Festival of the Arts.

In May 2014, Flemington DIY was founded by a local group of young artists and musicians. With assistance from the Flemington Business Improvement Office, they found a temporary home in the borough-owned 90 Main Building, once a bank, but vacant for years. “The Space,” as it’s become to some, immediately began hosting art shows, concerts, and film screenings. Since then, Flemington DIY has transformed into a flourishing center for community life for all ages, sustaining on the generosity of donations, grants, and the Borough of Flemington.