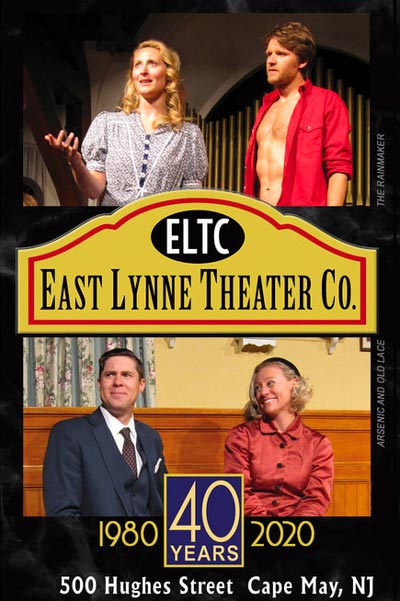 While many theaters around the Garden State take the summer off, East Lynne Theater thrives on the summer season.  Located in Cape May, the theater is dedicated to presenting American theater classics.  Seasons often include a play or two that hasn’t been performed in decades. In 2020, the theater celebrates its 40th season with the theme of “Challenging Change” and productions of Possessing Harriet, Born Yesterday, and Why Marry? to go along with their annual radio shows, Halloween, and Christmas based productions.

Warren Kliewer founded the company in 1980 with shows originally presented in Secaucus and Rutherford.  He envisioned the theater as “a vehicle for rediscovering the enduring values of the American heritage and for deepening our understanding of what it means to be an American.”

Gayle Stahlhuth has been the Artistic Director of the company since 1998, but she became involved with the company shortly after it began.  As an actress and playwright, she was called in to do her one woman show  Lou: The Remarkable Miss Alcott when a one man show East Lynne had planned to run had to be cancelled due to illness.  She became friends with Kliewer and got involved with the company, soon joining the Board.  She was on the Board when the Mid-Atlantic Center for the Arts invited the company to do shows in Cape May in 1987.  In 1989, the company alternated shows at the Chalfonte Hotel with the newly established Cape May Stage.  At the time, East Lynne would produce a show in Rutherford at the William Carlos Williams Center and then bring the show down to Cape May, come back and do the next show. Kliewer died in 1998 and Stahlhuth took over, but she kept the company in Cape May full time. 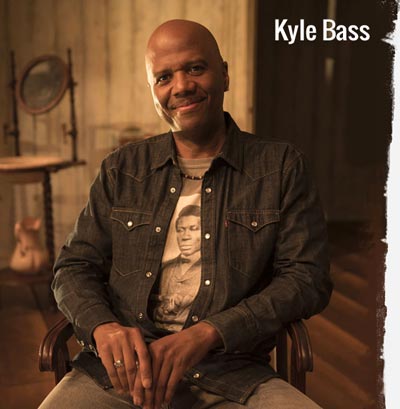 For 2020, the season begins with the New Jersey premiere of Possessing Harriet by Kyle Bass, which runs from June 17 to July 25.   In June, Cape May will be opening the Harriet Tubman Museum, so Stahlhuth thought the company should launch the season with an African American based play. A friend had told her about this play, which is based on a true story, and she acquired a copy of it.  The play is unpublished and the playwright is still fine tuning it, but Stahlhuth loved it and the company will become just the third anywhere to produce it.

“The premise is that Harriet Powell in 1839 is staying at a hotel in Upstate New York with her master,” explained Stahlhuth.  “There is obvious abuse going on and that’s alluded to, but also crouched in language that lets you understand the horrifying situation she’s in without the graphic details.  It’s stunningly written that way.”

Powell escapes from her Southern owner with the help of a freed slave who takes her to the home of abolitionist Gerrit Smith.

“They are trying to convince her to go to Canada,” continues Stahlhuth.  “She’s scared to death.  She almost goes back to her slaveowner because her challenging change would be that she doesn’t read or write.  Canada is a whole another country and she knows she will never see her family again.  Should she just go back down south and deal with the life she knows as opposed to the change of experiencing a whole new life and freedom?  When I read that I knew it was the opener for the season.”

Born Yesterday by Garson Kanin follows, running from July 29 to September 5. This 1946 comedy is about a business tycoon, Harry Brock, who brings his Broadway chorus girlfriend, Billie Dawn, to Washington, D.C. on a business trip. Here, he intends to convince those in Congress to vote his way. When he realizes that Billie doesn’t fit in well with Washington society, which might hinder his business dealings, he hires journalist Paul Verrall to tutor her.

Although reluctant at first, Billie proves to be a quick learner about American history and the founding of this country, which leads her to ask questions about Brock’s intentions in Washington.  Can trouble be far behind?

This is her nod to the upcoming election.  She notes that it seems like many theatres are avoiding political plays this season, but she felt they should do something.  “I am an extremely political animal and if you track what I do, you’ll see I’m subtle,” said Stahlhuth.  “I always try to do something that will get a conversation going.  It’s so interesting to me at the end of a show who says what about what.” 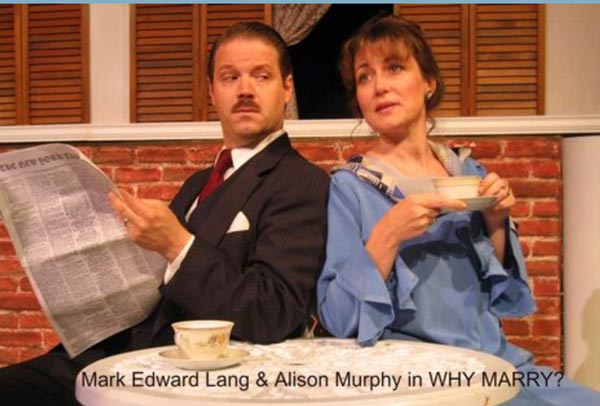 A few weeks after Labor Day, East Lynne Theater presents Why Marry? - the first play to ever win a Pulitzer Prize.  It opened on Broadway in 1917 and is rarely presented but will be seen in Cape May for the second time. The company presented it in 2006, bringing it back on stage for the first time in 86 years.  It was such a hit that they brought it back the next year.  Stahlhuth believes one of the reason it is rarely seen is that the play needs work for modern audiences.

“It needs edits and cuts,” she explained.  “It’s a little redundant here and there.  I had the patience to do it and I had a wonderful cast who would make suggestions.  They’d say a line and look at me and I’d say, ‘You’re right, cross it out.’ I’m having fun now revisiting it with fresh eyes to see if some of those cuts need to go back in and where other cuts should be made.”

“It’s wonderful in its setup,” continued Stahlhuth.  “You’ve got one character who is a judge, so you’ve got the legal aspect of marriage.  The judge is actually getting a divorce when the play starts.  Then you have their cousin who is a theologian, so you have the religious aspect of marriage.  And then you have our heroine’s brother who is very materialistic, so there’s another reason to get married or not.  They’re all represented rather wonderfully and once the characters are all set up, they go at each other.  It’s very funny! The couple are both scientists. Some of the funniest lines include the man saying things like, ‘Well, I love you, we need to get married’ and her response is, ‘Well, I love you too and that’s why we can’t.  We have to think of our careers.  I’d rather work with you.  I don’t want you to give up your job to make more money because you should be a research scientist, and I want to be there to help you. We just can’t get married.’”

“I think you have to have the patience as a director or producer to sit there and start analyzing the script and find out where it should be cut.  Find the areas where it is repetitive. If you cut some of that fat off, the humor is even quicker and it moves faster and makes its points stronger.  Back in the day, a 2 1/2 to 3 hour play was quite normal.  In today’s world, if there’s any excess anywhere it just can’t afford to stay there.  It has to go.  Our attention spans are not that forgiving.  I feel bad for playwrights right now.  If you don’t write a one set, 90 minute, 4 character play, your chances of getting produced are slim,” she noted.

Summer is obviously the big season for Cape May and things get much quieter in the off season, but rather than go dark, East Lynne Theater begins presenting shows on the weekend and for the holidays.  It helps them maintain a presence throughout the year and since many of the events are done each year, they have developed quite a following. 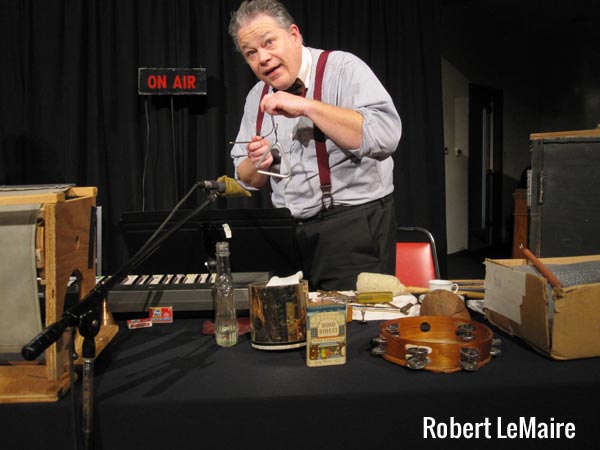 In addition to the mainstage plays, the company also presents Sherlock Holmes: Adventure of the Blue Carbuncle as a radio play three times during the year (March 13-14, October 30-31, and November 6-7); Halloween films (silent movies with live music) and Poe by Candlelight; and Christmas with Harte & O. Henry (November 27 to December 12).

“People in Cape May are actively looking for Halloween things to do and for things at Christmas too,” said Stahlhuth.  “We just can’t do as many shows because we are in a functioning Church and it’s their big holiday.  So, we kind of dance around that.  Along with us doing that Christmas show, we’re also involved with telling tales on Mid-Atlantic Center for the Arts’ trolley rides.  So we have storytellers for that and it’s usually about 35 trolley trips between mid-November and January 1st.  That does very well and is almost always sold out.” 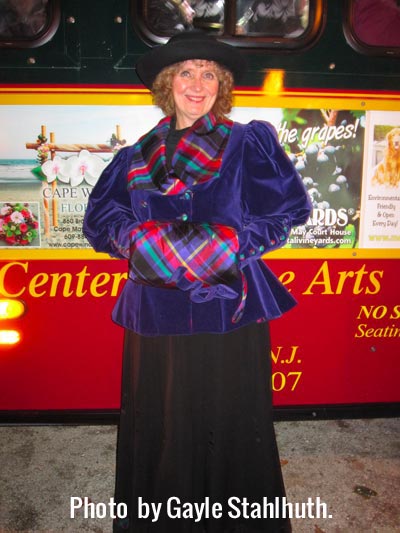 East Lynne Theater is also involved with murder mystery shows that are done on weekends at local bed and breakfast inns during the off season.  These shows allow guests to portray the detective, murderer, victim, witness, curious bystander, and other crime-related characters, with Frank Smith, an experienced retired Philadelphia police detective, giving just enough information to get sleuthing skills going. Stories are changed often because there is a regular audience that keeps coming back for them.

When East Lynne Theater first moved to Cape May, it was one of the few shore towns in the area to have cultural arts.  In the last few decades, Stahlhuth has seen most of the surrounding towns ramping up their programming as well.  Thankfully, the events all serve as a big tent - helping each other as the area enjoys a bigger presence of arts and entertainment.  One thing the area lacks is actors.  East Lynne has to bring actors to the area because the theater is too far from New York and Philadelphia with expensive housing costs.

What’s nice is that both Cape May Stage and East Lynne Theater have carved out their own niches.  The former offers contemporary shows and the latter focuses on gems from the past.  They both benefit from the tourist industry, but Stahlhuth notes that while half of their audience each year is tourists, they are lucky if a quarter of them return the following season.  Odds are that they will be vacationing somewhere else.  It’s one of the problems faced by a theatre at the shore.  Thankfully they attract theatergoers from Cumberland, Gloucester, and Atlantic counties as well.

If you’ve never been to one of their shows, this is a great season to come down to Exit 0 and book a Cape May weekend.  While you’re enjoying a pre-show meal at one of the great restaurants in town, raise your glass and toast the theater as they celebrate 40 years.  In the theatre world that’s an amazing accomplishment.  For a theatre that celebrates shows history has forgotten, it’s even more special. It’s a theatre that connects us to our past with plays you won’t see anywhere else.

As the New Jersey Legislature noted in 2018, East Lynne Theater Company is deserving of accolades and praise “as one of the State’s most important cultural treasures.”