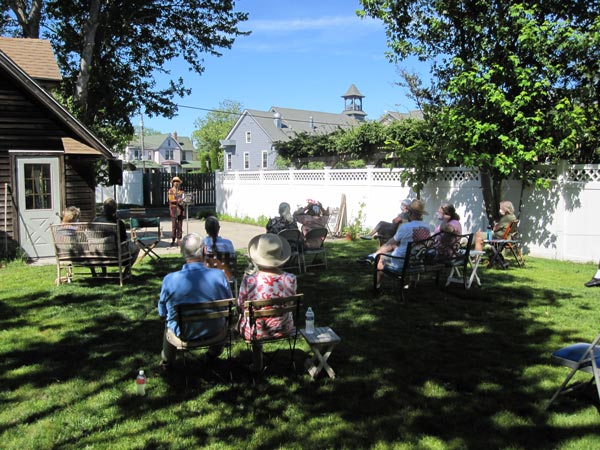 (CAPE MAY, NJ) -- East Lynne Theater Company's "Tales in the Backyard" is celebrating Juneteenth on Thursday, June 17 at 4:00pm with Stephanie Garrett presenting "A Brief Look at the African American Experience in America Since Juneteenth." Although the Emancipation Proclamation was in 1863, it wasn't until after the Civil War that Blacks in the slaves in the were freed. On June 19, 1865, now known as "Juneteenth Day," freedom for slaves in Texas was officially announced.

Garrett is featuring three authors from the serious to the humorous. She's reading a speech by Mary Church Terrell in 1906, titled "What it Means to be Colored in the Capital of the United States," followed by a Langston Hughes' story from his book "The Best of Simple," that depicts life in Harlem in the 1940's. The third selection is from Alice Childress's book, "Like One of The Family: Conversations from a Domestic’s Life,” a humorous look at the African American take on working for white folk in the 1950's.

"Tales in the Backyard" are every Thursdays at 4:00pm from June 17 – August 26 and reservations are required due to limited space. The location is revealed when making a reservation by calling 609-884-5898 or e-mailing eastlynneco@aol.com. The cost is $5 cash-at-the-door, and ages 12 and under are free. Performers use microphones and every week is a different story, speech, or one-act. On July 24, James Rana reads stories by three humorists who wrote for "The New Yorker" and on July 1, Gayle Stahlhuth reads selections from her autobiographical one-act "Goin’ Home."

Stephanie Garrett played Mary in ELTC's NJ premiere of Jan Buttram's "Lost on the Natchez Trace," and also performed in ELTC's "Women and the Vote," "Rain," "The People of Cape May v. Johan Van Buren," "Yuletide Tales," and "Christmas in Black and White" with Gayle Stahlhuth. Over fifteen years ago, as a volunteer at Historic Cold Spring Village, she became a storyteller, specializing in early 19th Century Cape May County African American History. Garrett has a BA and MA in Sociology and worked as a Sociologist and Human Resources Manager during her career in Federal Government.  Upon early retirement she received the Meritorious Service Award, the highest award given by the Department of the Navy to a civilian employee.

To learn more about ELTC's "Tales in the Backyard," stories, performers, and where to find the videos, visit www.tinyurl.com/ELTC-tales.  Not in Cape May? On April 30, 2020, ELTC began offering "Tales of the Victorians at Home" on ELTC's YouTube Channel.

ELTC adheres to all regulations set forth by the State of New Jersey to ensure a safe and enjoyable theater going experience for our patrons, staff, volunteers, and artists.

In August, ELTC returns to its usual performance space, The Cape May Presbyterian Church, 500 Hughes Street, for its Student Summer Workshop, and the mainstage season goes inside from September through December. To learn more about ELTC's season, visit eastlynnetheater.org.