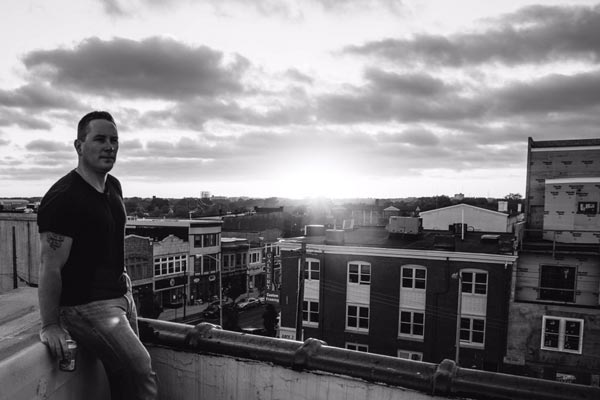 Chris Brown is a gritty singer-songwriter from Asbury Park whose songs blend punk and folk in a way that evoke the spirit of an Irish pub.  His latest release One More Night was produced by Pete Steinkopf of The Bouncing Souls and mastered by Tom Ruff at Asbury Media.  It contains six songs that have rarely left my playlist since its release over the summer.

The album’s standout track is “Serve ‘Em All” - an ode to the Bond Street Bar (where he worked as a bartender for several years) and a fond look at the best memories in a Jersey Shore town that has gone from being called “Beirut” to “Hipster” in the past decade. The song pays tribute to the days when there was beauty in its darkness.

There’s the artists, the writers, the cops and firefighters
Who raise a glass to family and friends
There’s the losers, the winners, the saints and the sinners
A big misfit family in the end

You don’t have to go home, but I guess you can sleep in your car cuz

In the song “One More Night,” Brown offers additional perspective on the changes in town as well as his own mortality.  Now in his mid-thirties, he became a father for the first time over the summer.  This song celebrates youth and the inevitable loss of youth and friendships as age and adulthood take over.

I guess Bobby was right, the “times are a changin’”
The places we once knew, are only getting stranger
So meet me on the rooftop we can see this city’s heart
Beating back the changing tide before it gets too dark

The track “Gunshots & Bombs” tells the tale of a guy who sees the death of the American Dream, worries about the future, but takes comfort that even when the bullets are flying, his girl makes everything ok.  Sounding like an Irish storyteller, Brown says he has always loved Celtic folk songs, “I think that came out in my writing later on.”

First thing this morning I turned on the news,
Saw the hope for the future hangin’ by a noose
The American dream’s 6 feet under the ground, I’d swear
that we learned to fly just to shoot shit down

He dives into the power of finding a soulmate in “The Hardest Part.”  His lyrical style hints of personal reflection.  Even if the songs are fictitious, he makes us believe they are not.  His wife, Maggie, is a mixed-media artist.  They have been married for about three years now and being with a creative person clearly inspires Chris.

Don’t know if I told ya, I don’t write much when I’m happy
I guess that I’m feelin’ more clever when I’m sad
But now that I find myself always around ya
It’s easy to see that life ain’t so bad

As long as I’ve known ya you’ve always been crazy
But you’ve always had the kindest smile
O well you never cease to amaze me
My Frida, Magnolia I’ll love ya lil the day I die

We all hold secrets in “Glass Houses.”  Brown admits he has a couple of his own that involve his exploits, anger, and interactions with the law while in his twenties.  “I’ve tried to be kinder to people because I guess I have a bad temper, or so I’ve been told,” he said.

And he reveals the power for music to save as well with “Never Let Go” - a song that shows impressive restraint.  The lyrics sound like they belong in a fast punk anthem, but Brown slows everything down to a crawl.  The result is almost like psychoanalysis - raw, inspiring, and powerful.

Even though this isn’t his first album, the tracks combine to tell the story of who Chris Brown is right now, what he’s feeling, what he’s dealing with, and what keeps him going.  It’s an honest record from a guy who has had his share of problems to overcome.  Even though he received an Asbury Music Award in 2015 for Top Male Soloist/Acoustic act, Brown still seems to be floating a bit under the radar.  Check out his website and give his tunes a spin.  The lyrics might speak to you the way they speak to me.