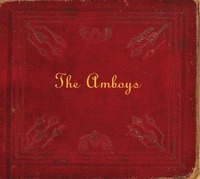 The Amboys have been one of my favorite New Jersey-based bands ever since they first started kicking around the Asbury Park area a year ago. Their debut record, "Everything Between The Moon & The Sun" provides brilliant country-infused garage rock and roll that reminds me of Johnny Cash waking up on the wrong side of the bed after an all night binge, taking some speed, and heading out to the local punk rock bar to jam with whoever was on stage. It's got a true kick ass spirit to it.

Songs have the energy of Jason & The Scorchers in the 80s and the bite of Social Distortion. The record features some of the best rock and roll keyboard I've heard in a while -- that great B3 sound found in classic ‘60s garage rock tunes. It's a sound that's timeless, very cool, and rarely used as well as it is here.

"With late nights and heavy drinking, the in-between hours of the moon coming up and the sun coming back around, many things can and do happen. Lost love, one night stands, overdue phone calls, shots of whiskey and too many cigarettes," is how the band describes the record. I'd agree.

My favorite tracks are "Can't Live Here", "Kid In the City", "This Very Thin Line" and "Drunk Mistake".